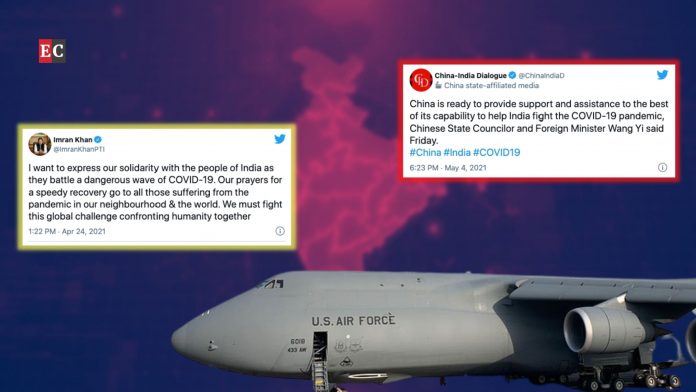 As a lethal second wave of the COVID-19 pandemic sweeps through India like a hungry wildfire, made many times worse by an acute Oxygen crisis and a crumbling health infrastructure, the international community has rushed in to help.

Around 14 countries – including the US, UK, France, Australia, Singapore, UAE, Saudi Arabia, Japan, and Germany – have assured support in the form of critical medical supplies, such as oxygen tankers, plants, concentrators and related equipment.

Even China, otherwise on tense terms with India, has extended solidarity with India. Both Chinese President, Xi Jinping, and Foreign Minister, Wang Yi, expressed their sympathy and condolences amidst the surge. Wang Yi said that China was “ready to provide support and assistance to the Indian people at any time according to the needs of India.”

The US has also acceded to demands made by India and other countries, such as South Africa, to convince World Trade Organisation (WTO) member countries to waive Intellectual Property (IP) protection on COVID-19 vaccines. On 5 May, US Trade Representative, Katherine Tai, said that the current pandemic is an unprecedented crisis and calls for extraordinary solutions. She said:

“…The administration believes strongly in intellectual property protections, but in service of ending this pandemic, supports the waiver of those protections for COVID-19 vaccines.”

The negotiations, of course, are going to take time. Thus, this decision will not achieve the desired aim of ramping up vaccine production in developing countries on an emergency timeframe.

India has received strong support from neighbours in South Asia. On 6 May, Bangladesh provided 10,000 vials of Remdevisir to an Indian government representative.

“Bangladesh stands in solidarity with its close neighbour India at this critical moment and Dhaka is ready to provide and mobilise support in every possible way to save lives there.”

Pakistan too has extended solidarity to India, and offered support. It is not just senior officials within the Imran Khan government, but also philanthropic organisations that have extended their support to India. Prime Minister Khan, in a recent tweet, said:

“I want to express our solidarity with the people of India as they battle a dangerous wave of COVID-19. We must fight this global challenge confronting humanity together.”

Faisal Edhi, the managing trustee of the Karachi-based Abdul Sattar Edhi Foundation (one of the largest ambulance networks in the world), offered to send a fleet of 50 ambulances along with logistical support – emergency medical technicians, office staff, drivers and supporting staff – to India.

The North Indian state of Punjab, which shares a border with Pakistan, has also been facing an oxygen crisis. On 4 May, the state’s Chief Minister, Captain Amarinder Singh, revealed in an interview that the Narendra Modi government at the centre recently turned down a proposal sent by his government to import liquid Oxygen from Pakistan via the Wagah-Attari land border.

Along with the Chief Minister, Amritsar MP, Gurjit Singh Aujla, had also written to the central government regarding the shortage of oxygen. Both proposed import of oxygen from Pakistan, while Aujla additionally proposed to set up an oxygen corridor from Pakistan to India.

Notably, while the closest oxygen plant to Amritsar in India is 350 kms away in Panipat, the one in Lahore is just 50 kms afar. There is a growing chorus in Punjab to put aside differences and give precedence to humanitarian concerns over ultra-nationalism.

Given that India has already announced a ceasefire with Pakistan, and a number of other steps too have been taken in recent months for normalisation of relations, many analysts of the opinion that there is no reason for India to not allow import of oxygen.

In conclusion, it is important for the government in New Delhi to shed its ultra-nationalism and realise that in an interconnected world, there is no loss of prestige in seeking assistance from other countries, especially during a crisis. After all, many countries hit by the COVID-19 pandemic have sought assistance of others.

A lot of introspection is certainly needed as far as existing health systems are concerned. This includes the overall handling of the situation by both the central and state governments, against the background of the centre-state dynamic.

It is also important for India to not just focus on building a more robust relationship with immediate neighbours, but also seek assistance if necessary or not reject it due to false prestige. It is, after all, tough to ignore the logic of geography.