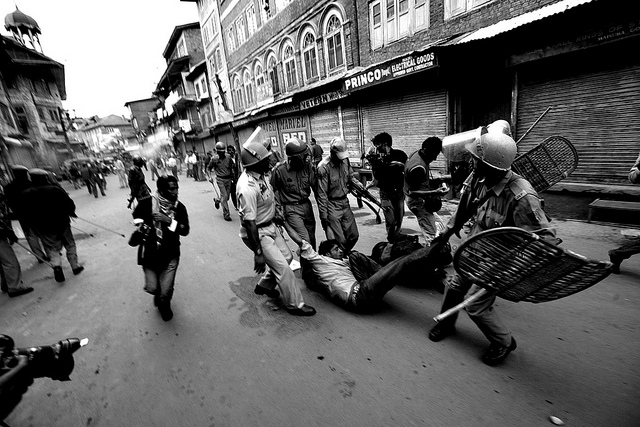 The takeaway from the current political environment in Kashmir is clear: the Bharatiya Janata Party (BJP)–Peoples Democratic Party (PDP) coalition government is fast losing its political clout in the Valley.  The opposition parties and separatist elements are likely to take advantage of the recent developments – including the dismal turnout (7%) in the by-election for the Valley’s Lok Sabha seat – to aggressively target the Mehbooba Mufti-led alliance in the state. After winning the Srinagar seat, National Conference (NC) president, Farooq Abdullah quickly demanded the dismissal of the BJP-PDP government over the failure to conduct a peaceful election and sought Governor’s rule in the state.

The by-poll for the Anantnag parliamentary seat remains postponed until May 25 due to the violence in Srinagar. PDP candidate Tassaduq Mufti appealed to the Election Commission calling for a deferment, which clearly suggests that the state government is not in full control of the situation on the ground in Kashmir. However, a month-long postponement is unlikely to bring any drastic change to voting patterns, especially in South Kashmir – the epicenter of the 2016 violent unrest that erupted after the killing of Wani.

More importantly, the postponement may strengthen separatist propaganda for non-participation in the democratic process in the Valley. The joint Hurriyat Conference leadership spearheading the uprising – Syed Ali Shah Geelani, Mirwaiz Umar Farooq, and Mohammad Yasin Malik – was exultant about the election outcome. Irrespective of its arguably limited influence, the group is said to be actively fomenting unrest in the Valley. According to an Intelligence Bureau report, Pakistan’s Inter-services Intelligence (ISI) has allegedly funded some of these separatist leaders to fuel unrest in Kashmir, and deteriorating mainstream politics provide fertile ground for the separatists to expand their influence in the Valley.

After losing the Srinagar seat, the PDP now faces the uphill task of containing its traditionally strong-held South Kashmir seat. Voters are visibly disenchanted with the PDP due to party infighting, inability to fulfill poll promises, the “unholy alliance” with the BJP, civilian killings post-Wani incident, and more. These factors, coupled with the Srinagar electoral outcome, the recent killing of the PDP’s Pulwama unit president, and constant threats from local militants to voters, may work against the PDP in the Anantnag by-poll. If the party loses that seat, the onus will fall on Mufti’s leadership, leaving the PDP with only one parliamentary seat (Baramullah) out of the three in the Kashmir Valley.

Furthermore, ongoing political turmoil exacerbates tensions between security forces and locals, who are increasingly turning to stone-pelting and purposefully interfering in counterinsurgency operations. Even India’s Chief of Army Staff General Bipin Rawat’s warning of “harsh action” against obstructionists appears to have fallen on deaf ears, as militants still enjoy popular support in some parts of Kashmir.

Deteriorating relations between India and Pakistan may also affect the security situation in the Valley. Islamabad is closely watching developments in the state and is likely to use them as an opportunity to internationalise the Kashmir issue. With Pakistan’s general elections just around the corner, the Sharif government is likely to use the issue to appeal to its domestic audience. The absence of any diplomatic engagement and possible cross-border firing incidents in the coming months may further aggravate instability in Kashmir.

Widespread refusal to vote and violent protests surrounding the Srinagar by-election were anticipated after almost five months of unrest. However, all is not lost for the coalition government, as Kashmiri voters have displayed confidence in the democratic process in previous elections. In the last Lok Sabha elections in 2014, the state recorded a total voter turnout of 49.52 percent. Srinagar witnessed a turnout of 26 percent, which was comparatively better than the recent by-poll results. Therefore, if the coalition government takes certain corrective measures to secure democratic space in the Valley, it could recover.

First, implementation of the confidence-building measures mentioned in the “Agenda of Alliance” is required. This includes providing good governance, fostering ethnic and religious diversity, and facilitating a multi-dimensional dialogue.

Second, Prime Minister Narendra Modi’s development agenda is important for the state’s economic growth, but its implementation requires more robust political acceptance for the ruling party among constituents. New Delhi may want to engage with internal stakeholders despite their ideological or political differences to save the alliance and the mainstream political set up in Kashmir. This extends to local journalists, civil society initiatives, opposition party leaders, religious heads, and even the Hurriyat Conference representatives.

Third, state security agencies need to ensure that voters and mainstream political representatives have a safe environment to participate in the electoral process. Along the same lines, security forces need to devote more attention to avoiding civilian casualties at encounter sites and look for alternative strategies when facing violent mobs, to provide space for the government to come up with a workable political solution.

A slightly longer version of this article appeared on 26 April 2017 at South Asian Voices, an online platform for strategic analysis and debate hosted by the Stimson Center (Washington DC, US). Reproduced here with permission.

Sarral Sharma is a Researcher at the Centre for Internal and Regional Security, Institute of Peace and Conflict Studies, New Delhi.