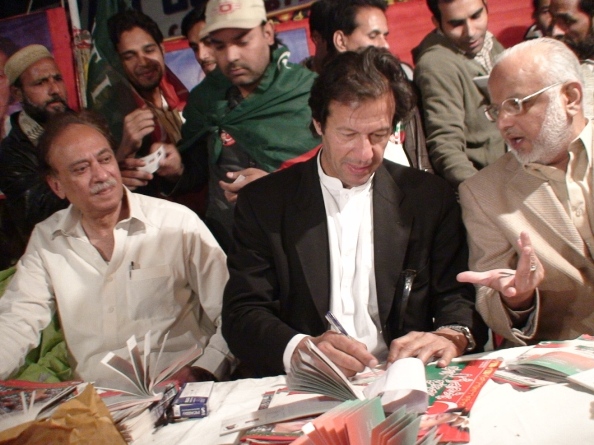 During the recent national election in Pakistan, one of the key slogans of Pakistan-Tehreek-I-Insaaf (PTI), led by newly-elected Prime Minister and former cricketer Imran Khan, was ‘Naya Pakistan’ or ‘New Pakistan.’

Many thought that this would pave the way for new faces in government. Khan has often spoken about the need for transforming the ‘feudal culture’ of Pakistani politics, which has arguably been a key impediment to Pakistan’s development and progress.

A number of books on the country identify ‘feudalism’ as an important feature of Pakistani politics, arguing that kinship and patronage networks have played key roles in keeping the Pakistani state afloat.

But, Khan’s cabinet consists of several familiar faces from Pakistan’s traditional political establishment. While this might be in cahoots with the domestic electorate’s aspirations, the presence of India-friendly cabinet ministers bode well for the terse India-Pakistan bilateral.

Both at the federal level as well as the provincial level in Punjab, Khan’s team contains faces that have been not just been part of the older system (which Khan seeks to reform) but have also been initiated into politics by the military.

Twelve out of twenty one members in the various cabinets have been part of the military-led government of former strongman and Prime Minister, General Pervez Musharraf, while five have been members of the Pakistan People’s Party (PPP)-led governments in the past.

There are several top-rung appointees in the new government who are quintessential system insiders, such as railway minister, Sheikh Rashid, who was first with Nawaz Sharif’s Pakistan Muslim League-Nawaz (PML-N) and later part of General Musharraf’s cabinet.

Two others – foreign minister, Shah Mehmood Qureshi, and current speaker of Punjab assembly and former chief minister of Punjab, Chaudhry Pervaiz Elahi – were initiated into politics by the army.

Shah Mehmood Qureshi, nominated to Punjab Assembly during General Zia-Ul Haq’s reign, belongs to a prominent family of Punjab. His father was Governor of Punjab in the 1980s.

Later on, Qureshi shifted to PPP, then led by former two time Prime Minister, Benazir Bhutto, and was foreign minister till 2011. Following this, he was removed from his ministerial position, and later, left the PPP.

Qureshi has close links in Indian Punjab, particularly with farmer’s groups. He has visited India on a number of occasions. In fact, Qureshi was in India at the time of the Mumbai attacks in 2008i n his capacity as the then foreign minister.

In the all-important province of Punjab, Khan, to secure a poll victory, had to strike a deal with the Pakistan Muslim League-Quaid (PML-Q) leader, Chaudhry Pervaiz Elahi, who was former the Deputy Prime Minister of Pakistan and Chief Minister of Punjab. Elahi’s cousin, Shujaat Hussain, was Prime Minister during General Musharraf’s rule.

Often referred to as the Chaudhrys of Gujrat, Elahi belongs to a line of sugar barons who have been in politics for over six decades. They have been close to military dictators, particularly General Zia-Ul Haq. On the other hand, former Prime Minister and founder Chairman of PPP, Zulfikar Ali Bhutto, had harmed the Chaudhry family’s business interests during his nationalisation campaign.

Their ideological orientation mirrors Nawaz Sharif’s, and unsurprisingly, were part of Sharif’s PML-N till 1999. In fact, the only reason for the subsequent fall-out was the appointment of Nawaz Sharif as Chief Minister of Punjab Province by General Ghulam Jilani Khan in the 1980s instead of Elahi.

The Chaudhrys too have strong links with a number of Sikh families in Indian Panjab. Elahi, during his term as the Punjab Province’s Chief Minister, had sought to improve ties with Indian Punjab. He established a solid rapport with the then and also current Chief Minister of Indian Punjab, Captain Amarinder Singh.

During this period, there were a number of cultural and sports exchanges between both sides. Elahi also attended the Punjab Games in 2004 where athletes from both Punjabs participated. This event was the first of its kind in the post-Partition period. Attempts were also made to strengthen economic linkages.

While the Bhutto family and the Chaudhrys had a longstanding rivalry, Elahi later joined the PPP government led by President Asif Zardari, and became the Deputy Prime Minister in 2012.

Former Foreign Minister, Khurshid Mahmood Kasuri, too is part of the PTI government. Kasuri, whose grandfather was part of the Indian National Congress till 1940, was earlier part of both the PPP and PML-N. During General Pervez Musharraf’s regime, he served as Foreign Minister. He has close ties with former Indian foreign minister, Mani Shankar Aiyar, and is a frequent visitor to India.

It remains to be seen if current Chief Minister of Indian Punjab, Captain Amarinder Singh, can use his rapport with Elahi to revive linkages between the two Punjabs. This would be in sync with Imran Khan’s call for better economic ties between India and Pakistan.

In fact, the only Indian dignitary who attended Khan’s swearing-in was former and current minister for Culture and Tourism in the Captain’s cabinet, Navjot Singh Sidhu. Sidhu, in a press conference on 2 August, weeks before Khan’s swearing-in, had also pitched for closer economic ties and people-to-people contacts between the two Punjabs.

He received a rousing welcome in Pakistan, and during the oath taking of Imran Khan, met with the Pakistan Army Chief, Qamar Javed Bajwa. Bajwa, during his brief meeting, spoke about building a religious corridor, which would help the Sikh community to gain visa-free access to Gurdwara Darbara Sahib, in the Pakistani Punjab town of Katarpur where Guru Nanak Dev spent the last few years of his life.

Disturbingly enough, a casual hug between Sidhu and Bajwa triggered a massive controversy in India, where the ruling Bharatiya Janata Party (BJP) and even the Captain denounced the show of affection.

Will go to Pakistan 1000 times if I am invited by Imran Khan: Navjot Singh Sidhu, Congress leader to ABP News. https://t.co/DklVA2kRqn pic.twitter.com/5fORqJ5odQ

But, the Sikh community is commemorating the 550th birth anniversary of Guru Nanak Dev – the founder saint of Sikhism – this year, and both India and Pakistan could celebrate this jointly, primarily because the Guru was born in Pakistan.

In conclusion, if one were to look beyond the party slogans, Imran Khan’s use of old hands may seem like a classic case of opportunistic politics. But, the India-friendly faces on Khan’s cabinet can amount to something positive for both countries, given that New Delhi and Islamabad are serious about peace.