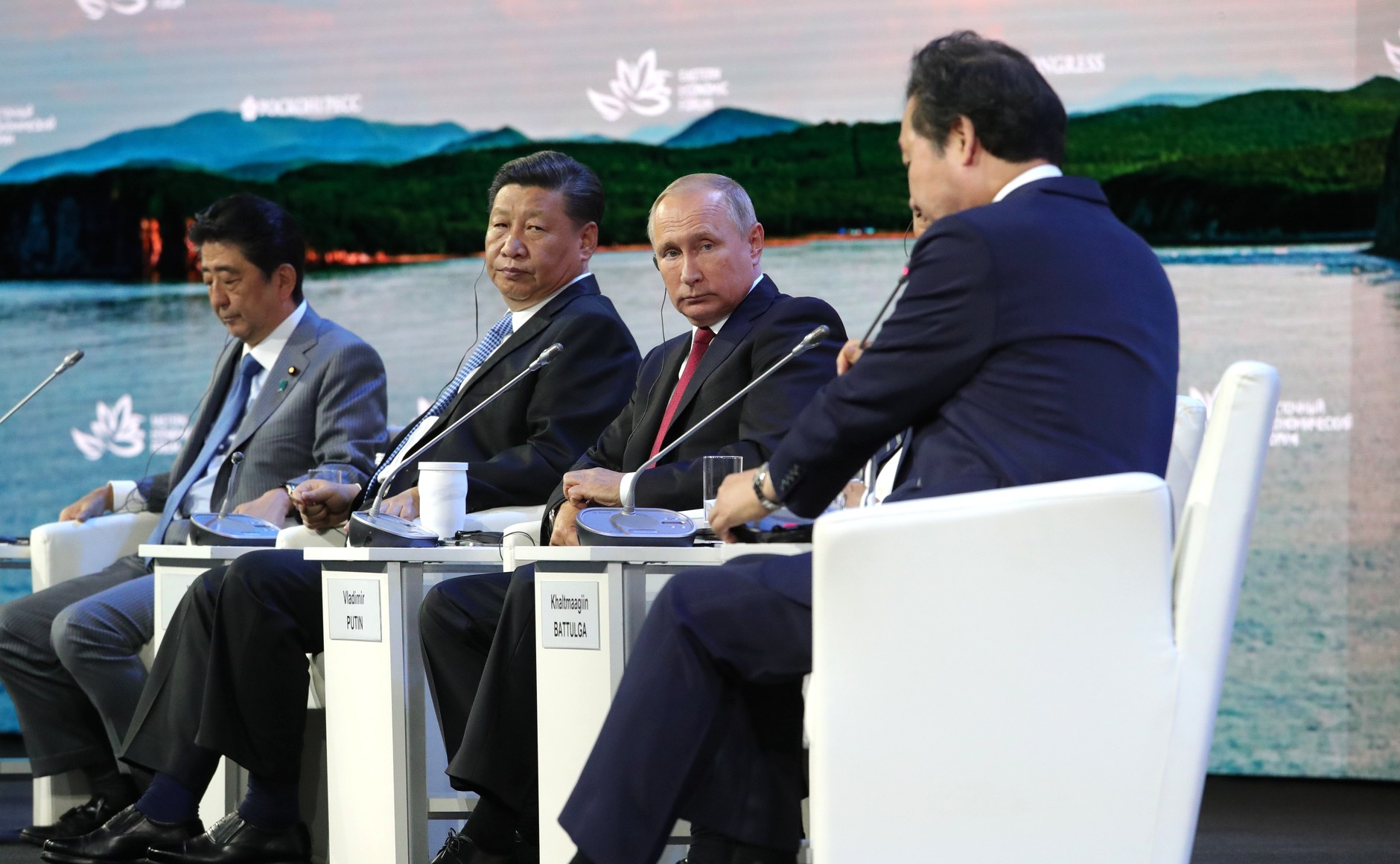 Chinese President Xi Jinping, from 11-12 September 2018, attended the Eastern Forum in Vladivostok (Russia), becoming the first Chinese President to do so. He also met with Russian President Vladimir Putin for the third time in as many months. Significantly, Japanese Prime Minister, Shinzo Abe, too attended the Forum titled “The Russian Far East: Expanding the Range of Possibilities.”

Both Xi and Putin repeatedly referred to their close personal rapport. For instance, Xi, while referring to their individual ties stated, that “friendship was getting stronger all the time.” Both sides also highlighted the deepening of economic and strategic ties between Russia and China and the convergence of their policy visions on key global issues. Neither side missed any opportunity to target the US for it’s “inward-looking” economic policies.

China is also currently participating in military exercises hosted by Moscow in Siberia, which are being dubbed as ‘Vostok 2018.’ Interestingly, Beijing clarified that these military exercises were not targeted at any third party. The grand exercise involves 300,000 troops, 1,000 planes, alongside a number of warships. China sent over 3,000 People’s Liberation Army personnel for the same.

A number of issues were discussed during the course of the Forum. Both China and Russia agreed that there was a need to accelerate bilateral economic ties. Trade between both has witnessed a significant rise in recent years: while in 2017, it was estimated at over 80 billion USD, in 2018, bilateral trade is expected to surpass 100 billion USD.

Chinese investments in Russia have also been increasing. According to the Russia-China Investment Fund (RCIF), set up in 2012, 150 representatives from China and Russia have already identified 73 projects estimated at 100 billion USD. According to the RCIF, 7 projects estimated at over 4 Billion USD have already been identified. Both sides also agreed to promote stronger synergies between China’s Belt and Road Initiative (BRI) and the European Economic Union (EEU).

Given the fact that the Forum was held in the Russian Far East (RFE), the need to increase Chinese investment in RFE was high on the agenda. President Xi stated that China has always been a key participant in development projects in the eastern parts of Russia. Chinese Shandong Hi-Speed Group is also likely to invest in highway projects in RFE.

Recent years have witnessed an increasing Chinese economic presence in Khabarovsk, which is the second largest city in the RFE and 800 kms from Vladivostok. However, a large number of Russians have been uncomfortable with the growing Chinese economic clout in this region, besides taking issue with increasing number of ethnic Chinese immigrants. In 2010, Chinese population in RFE was estimated at less than 30,000,; by several estimates, the same is much higher today.

Both Russia and China warned against growing economic protectionism. Xi loudly voiced his support for greater international cooperation, and lashed out at the growing tendency towards protectionism. His views were echoed by Putin who said:

“The world and global economy are coming up against new forms of protectionism today with different kinds of barriers which are increasing.”

Putin argued that protectionism was a threat, especially to the ‘Asia-Pacific’. Intriguingly, the Donald Trump administration has been using the term ‘Indo-Pacific’ for the same maritime sector, much to the chagrin of Beijing.

Further, Xi came down heavily on ‘unilateralism’ at a time when China itself is being accused of carrying expansionist tendencies and promoting ‘debt trap diplomacy’. What was even more interesting was a reference to UN Charter with respect to convergence on global issues.

The message emanating from the forum was clear – the economic as well as strategic partnership between Moscow and Beijing is likely to strengthen, and both will try to develop an alternative narrative as against Washington’s current one.

New Delhi would be observing the Forum and meetings between Putin and Xi closely, since it’s own relations with Russia and China are of vital importance. While Moscow is important in the security context, economic ties with Beijing are important for New Delhi.

There are many in analysts in New Delhi who argue that India should be cautious in strengthening strategic ties with US as that could cause friction in New Delhi’s  relations with Moscow. Russia’s improved defense ties with Pakistan are often cited as a consequence of New Delhi moving too close to Washington.

There are others who argue that New Delhi’s ties with Moscow are robust and time-tested, and would not be impacted by closer ties with the US. After all, Putin is slated to visit India this October for the 19th India-Russia Summit, while India’s External Affairs Minister, Sushma Swaraj, during her recently-concluded Moscow visit, met with her Russian counterpart, Sergei Lavrov, and the Deputy Prime Minister, Yuri Borisov.

Always a pleasure to meet a good friend of India! EAM @SushmaSwaraj with Foreign Minister of #Russia Sergey Lavrov in her 1st engagement since arriving in Moscow. Both leaders had a good exchange of views on bilateral & regional issues. FM Lavrov hosted a dinner in honour of EAM. pic.twitter.com/r2IVgkNspZ

Both jointly chaired the 23rd India-Russia Inter-Governmental Commission on Trade, Economic, Scientific Technical and Cultural Cooperation (IRIGC-TEC) meeting. A number of issues, including the need to boost bilateral trade and enhance people-to-people contacts, were discussed. Significantly, this was Swaraj’s third visit to Russia in eleven months, and she stated that India accorded ‘high priority’ to ties with Russia.

The fact that Swaraj’s visit to Russia took place after a successful 2+2 dialogue with the US where a number of important defense agreements including COMCASA were signed shows that New Delhi understands the importance of ties with Moscow.

Modi Govt deserves praise for signing a vital & sensitive agreement like COMCASA with the US. It deepens Ind-US strategic partnership & is another giant step forward from our chronic Cold War anti-Americanism, after UPA’s nuclear deal https://t.co/tFYsrwmtgw

Even though the Trump administration has not given India any assurances with regard to a waiver from US sanctions under the CAATSA (Countering America’s Adversaries through Sanctions Act) if India purchases defence equipment from Russia, India  is likely to  sign a deal with Russia for the procurement of S-400 air defence system. During Putin’s visit, India is also likely to go ahead with an agreement with Russia to procure four frigates for the Indian Navy. While two of these will be manufactured in Kaliningrad, two will be manufactured in Goa.

The issue of trade tariffs which was highlighted by Putin and Xi has also not gone unnoticed by New Delhi. One of the reasons why India has been pro-actively reaching out to China, apart from the desire for peace and tranquility on borders, is a convergence on economic issues.

In fact, days after the 2+2 Summit, the US President, while referring to India and China, stated that the US had been providing subsidies to India and China for far too long and cannot afford to do so any longer.

In terms of Chinese investments in India, there has not been much progress so far due to political disputes. But, there is scope for greater economic cooperation between both countries through enhanced connectivity. New Delhi, on its part, should be open to connectivity projects like the BCIM (Bangladesh, China, India, Myanmar) economic corridor.

The recent proposal by Beijing to start a railway line from Kunming to Kolkata may not seem possible in the short run; but, in the longer run, it is worth examining as such a railway linkage could give a massive boost to the local economies of east and northeast India. Interestingly, on 9 September, Myanmar signed a memorandum of understanding (MoU) with China over a proposed China-Myanmar Economic Corridor (CMEC). New Delhi, should see this connectivity project as an opportunity, rather than an obstacle.

In conclusion, New Delhi, while enhancing strategic cooperation with Washington, needs to keep in mind that there is a plethora of economic as well as other issues of global importance where New Delhi can find common ground with Beijing and Moscow.

India already shares robust economic ties with China, and a strategic relationship with Russia. All three countries are also working closely in BRICS and SCO. New Delhi also needs to keep in mind that while strategic ties with Washington are important, Trump’s unpredictability will compel New Delhi to keep all its options open and think in a nuanced manner towards diplomatic diversification.