Home Fact-check No, India Does Not Have 11 Crore Rohingyas or 8 Crore Bangladeshi... 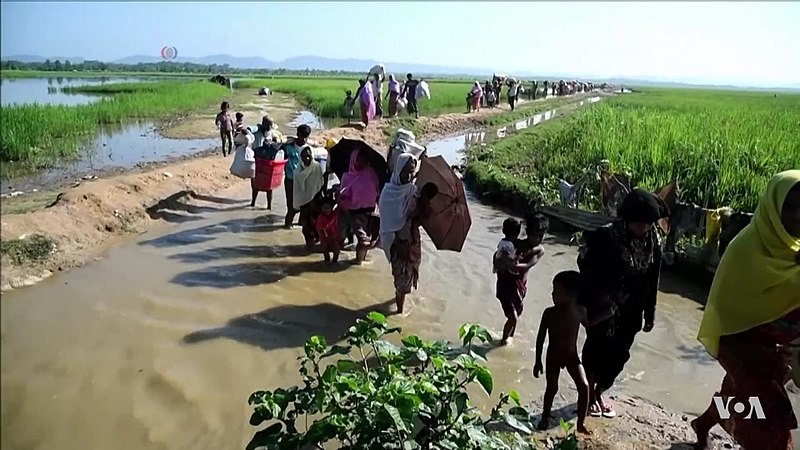 “Petrol-diesel prices have risen a little and all opposition parties are protesting. Rohingyas have increased to 11 crores but everyone is quiet,” reads a post shared by Facebook page I Support Narendra Modi. It has been liked over 28,000 times and shared over 21,000 times.

I Support Narendra Modi has over 1.5 crore followers and is run by Vikas Pandey whose social media presence is evidence of his closeness with several BJP leaders including PM Modi.

The viral claim was initially circulated by a Facebook page that goes by the name Social Tamasha. At the time of writing this article, its share count was 3,000.

The aforementioned claim has also been circulated with a slightly altered narrative – “The price of Diesel Petrol increased by Rs 5 and you declared Bharat bandh. But are those 8 crore Bangladeshi and Rohingyas your family members that you support them? Hypocritical congressis.” From a Facebook page called Doval Fan Club, the post has over 3,700 shares.

BJP MLA T. Raja Singh circulated the identical claims as well. His Facebook post has 2,000 likes and over 200 shares.

Facebook pages and groups – I Support Zee News, Rohit Sardana and Sudhir Chaudhary Fan Club, भा.ज.पा : Mission 2019, BJP Social Media, NAMO Again In 2019 में अपने 100 मित्रों को जोड़ें, Vote 4 BJP and several others – also made the assertion but left out the word “Rohingya”. They implied that eight crore “Bangladeshis” are currently residing in India. Their posts have a combined share count of nearly 11,000.

Several individual users have also circulated the claim on both Facebook and Twitter, juggling the number of “Bangladeshis” from 1.4 crores to 11 crores.

There are two assertions that need to be authenticated here – first, 11 crore Rohingyas residing in India and second, eight crore Rohingyas and Bangladeshis currently refuged in the country.

The Rohingyas are an Indo-Aryan population concentrated mainly in the Rakhine state of Myanmar. Rohingyas, who are majorly Muslims in a Buddhist majority country, face persecution in their own land. Their statelessness has forced them to flee to neighbouring countries of Bangladesh and India.

According to a January 2017 Indian Express report, which was republished by United Nations High Commissioner for Refugees (UNHCR), approximately 14,000 Rohingya refugees are spread across six locations in India – Jammu, Nuh in Haryana’s Mewat district, Delhi, Hyderabad, Jaipur and Chennai – and 11,000 of them have been given Refugee Status certificates by the Indian government.

Later in 2017, Union Minister of State for Home Affairs Kiren Rijju informed the Parliament that the Rohingya population in India was 40,000 and that the country would make efforts to deport them all. He had further added that this number also included the 16,000 Rohingyas who were registered with the UN as refugees.

While the exact number of Rohingya migrants in the country is difficult to ascertain, the figure cannot be as high as 11 crores as Myanmar itself has a total population of around 5.3 crores and its internally displaced Rohingya population is around 10 lakh.

Moreover, Border Security Force (BSF) director general K.K. Sharma, said earlier in September that there has not been any “large-scale influx of Myanmar-based migrants into India” in recent times.

After Bangladesh’s 1971 war for independence, millions of Bengalis tried to escape persecution by the Pakistani army. An article published in The New York Times in 1971 said that tens and thousands of Bangladeshi people, most of whom were Hindus, migrated to India. Back then, the Indian government estimated the influx to be around six to seven million.

The International Migration Report released by the United Nations in 2017 puts the number of Bangladeshi migrants residing in India at 3.1 million (31 lakh) after a fall of 8 lakh since 2000.

As part of border security talks between India and Bangladesh in September this year, a delegation of Border Guard Bangladesh (BGB) said that the country has not intercepted crossers in recent times.

“There is no large-scale infiltration or migration of people from Bangladesh into India as residents of that country now enjoy a very good life and the few who cross-over do so due to old cultural and family ties,” said BGB delegate Maj Gen Md Shafeenul Islam, as reported by Livemint.

The UN International Migration Report report also stated that the total number of refugees from all countries residing in India is 5.2 million (52 lakh). This takes into account anyone living in a country different from their own, including refugees and economic migrants.

Recently, the Indian government excluded four million people (40 lakh) from Assam’s draft list of citizens, most of whom were Muslims. While the Chief Minister assured that these people would be given a fair chance to prove their citizenship, popular sentiment regarded them as “illegal” Bangladeshi migrants. The government is yet to ascertain the identity of these people who are, as of now, and not illegal yet.

Suffice to say, posts suggesting that India has 8-11 crore Rohingya and/or Bangladeshi refugees are unsubstantiated. Moreover, it is ludicrous to ascertain that nearly 9% of the Indian population are illegal migrants.

Misinformation regarding refugees in India is commonplace on social media. Their numbers are often inflated to generate panic and for fear-mongering. With unsubstantiated claims floating across portals, it is pertinent to be aware of the number of migrants seeking asylum in the country. In the age of the internet, hard knowledge often takes a backseat by rumours and half-baked information which are twisted to suit a motivated narrative.

This report was originally published by Alt News. Read the original copy here.

Pooja Chaudhuri is a contributor in Alt News and describes herself as a “passionate crusader against fake news.”

Angshuman Choudhury - August 1, 2018
Assam's attempt at creating a database of 'genuine' citizens has spurred mass confusion, anxiety, and fear. Here's an attempt at clarifying some crucial facts about the NRC.