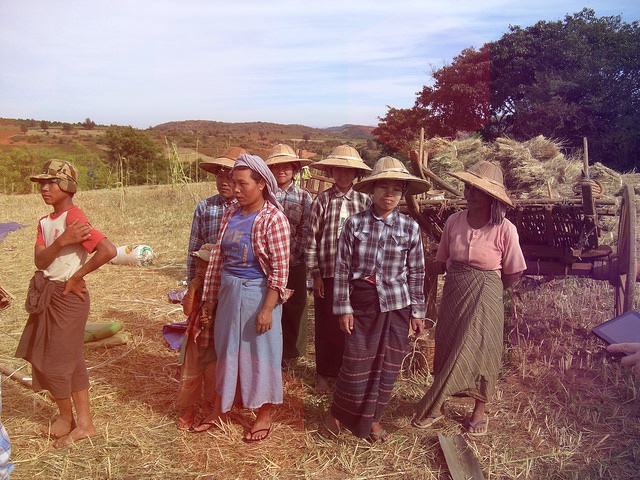 As Myanmar ramps up rural development, women are often cast as the unmarked objects of development interventions. Such assumptions obscure the different ways women are shaping the trajectories of families, farms and rural communities. In this piece, we discuss how we, as a foreign scholar and a Myanmar activist, have learned about and from rural women, and each other. Listening to Myanmar’s diverse female farmers, we argue, is an urgent critical and political task for scholars, activists and development practitioners.

“Yes, it is like ‘farmers’ only refers to men. But women must change their attitudes. Women who are managing their land with Form 7 [farmland registration document] in their name see themselves as farmers in a very strong way, I think.”

Agriculture is the backbone of Myanmar’s economy and livelihoods. From Tanintharyi to Magway to Kachin, millions of women are engaged in farming activities: cultivating crops, selling vegetables, and negotiating access to land. Yet these women don’t always see themselves as farmers. In Myanmar, children grow up with textbooks depicting men as farmers and women as housewives; as adults they usually use လယ်သမား to refer only to men. Many rural women identify as အလုပ်သမား (workers) rather than farmers because of cultural norms and state practices that cast them as dependents or helpers to husbands, fathers or brothers. Women’s implicit exclusion from the category of ‘farmer’ shapes how laws are interpreted and applied, how community-level decisions are made, and how communities, families and employers value women’s work.

At the Burma Studies Conference last month, a brilliant colleague responded to the topic of our presentation with the question: ‘Oh, are there women farmers in Myanmar?’ In the world of Myanmar activists, too, women farmers are often invisible. Very few farmers unions, for example, have women in their leadership. The general absence of women as land or farmer’s activists or decision-makers, alongside the widespread, commercialized depictions of smiling tanaka-wearing ladies in paddy fields, serve to reinforce a two-dimensional representation of women farmers as happy, liberated, and benign. The simultaneous invisibility and commercialization of these women obscure the class and ethnic diversity of female farmers, as well as the value of their labor and perspectives.

Women like the one quoted above, who manage their own land, have registration documents in their names, and see themselves as farmers, are exceptions. Yet while we celebrate these ‘success stories’ of empowered women, understanding the realities and politics of female farmers requires moving beyond these privileged few to understand the everyday experiences of women living and working on the land. Since our first project together speaking to women from across the country about the National Land Use Policy in 2014 and 2015, we’ve worked, together and separately, as well as with other partners, to do this through publication of women farmers’ stories in Rainfall feminist magazine, creation of documentary films, and collaboration on a photography exhibition featuring images made by women farmers.

Self-portrait by Daw Lone, a Chin woman farmer from Kalay valley at the border of Sagaing Division and Chin State. This image was taken as part of a participatory photography project with Land Core Group, in which rural women took and discussed photos related to the themes of gender and land, which were then displayed at an exhibition at Deitta Gallery in Yangon in May 2017. About 200 images were taken and described as part of this project; in many, women captured themselves, their mothers, and their daughters working on farms (not a single image featured a woman’s husband!). Through self-portraits, women choose their own style of representation – no tamein, tanaka, or still pose here.

Initially, we were excited to talk to this woman, who was violating a traditional gender norm by plowing her field. But, as we spoke to her, we learned that she was not proud of doing this work; rather she plowed because the men of the family were all labor migrants and the burden of maintaining the farm had fallen to her. Speaking with her upset our own normative assumptions about ‘empowered’ women, and brought into focus the ways in which, within a larger political and socio-economic situation in which many farmers struggle with little state support, women often take on extra work to provide for their families.

Listening to rural woman not only re-values them within scholarship, activism, and development, but also increases the depth and efficacy of broader projects by drawing on gendered knowledge and practices. Amplifying female farmers’ voices in elite settings from which they are habitually excluded can help transcend dominant gender and class narratives, enriching our ability to understand and transform social structures of domination.

How we see women farmers, and how women farmers see themselves, is not just a source of scholarly curiosity. It is a political question.

In Myanmar, state spaces are male spaces. This is true in a quite literal sense – in 2014, there were no women administrators for the country’s 330 townships, and only 17 of 15,972 ward/village track administrators were women. Beyond the numbers, women’s experience of these spaces is often one of hostility. This was brought home to Hilary during a community theater exercise at a Female Farmers Forum held in Mandalay in July 2016, where women farmers acted out a skit of a widow trying to get farmland registration transferred into her own name, and being dismissed, solicited for bribes, and being subject to the condescension of various officers. This was also reflected in conversations she participated in around the drafting and review of the National Land Use Policy, in which sections on gender equality have been met with confusion and hostility by some members of government.

Women’s exclusion from the law is matched by their unfamiliarity with it: in a survey (n=400) Hilary conducted last year with Land Core Group, men were twice as likely as women to have heard of at least one of a dozen land-related laws and policies. Whereas about two-thirds of men reported being confident about approaching township authorities or courts for help with a land-related issue, less than half of women reported being confident to do so. Even if not enshrined in law, the culture of the state systematically reinforces women’s subordinate status. For example, the standard practice of listing married women as မှီခို (dependents) on NRC cards, regardless of occupation, reinforces women’s isolation from state structures.

Making the experience of women farmers political means recognizing the persistence of what Jonathan Saha, in writing about the ways in which patriarchy characterized and constituted colonial Burma, calls the masculine state. It also demands that we move beyond the narrative of heroic individuals. Three years ago, while we were conducting research together in the dry zone, Pyo met a local woman who had earned a master’s degree, but still officially alienated her landholdings to her husband. After speaking with such a highly-educated woman who still unquestioningly accepted patriarchal customs, Pyo reflected that the liberal solution of education and individual empowerment was not enough. The experience prompted Pyo to start thinking more seriously about how cross-class alliances and collective mobilization can affect long-term structural change.

It’s a common refrain of second wave feminism that the personal is political. Women farmers cannot be separated out from the larger political problems of land, rural development, and governance. Trivializing these struggles as individual issues or women’s issues risks a larger failure of progressive transformation in Myanmar today. Instead, we argue there is a need to look at law and policy through a feminist lens, and think about the state’s role in supporting women in agriculture.

Oh now we see, we are not dependent! Actually, everybody depends on us!

– conversation recalled between Pyo and a woman farmer in focus group near Kyuakpadaung, June 2015.

How can we co-construct ‘woman farmer’ as a political project – a strategic and progressive identity that can serve as a platform for women’s collective action, without erasing the diversity of their experiences? This is a long-term process of building common ground. Neither of us are Myanmar women farmers; our approach is therefore one of humility, solidarity, openness, and with the tacit acknowledgement that we will make mistakes.

To build a feminist movement in Myanmar, Pyo and the organization she co-founded, Rainfall, take a role of facilitator and assistant rather than seeing themselves as experts, educators or trainers. By working with leaders such as farmer leader Ma Cho Cho Thin from the Sagaing Farmer Union and labor activists like Ma Moe Wai and Ma Nwet Yi Win, Rainfall not only learns about farmer and labor issues, but also can reach the enormous communities that urban activists alone have difficulty understanding and accessing.

Rather than teaching feminism, Pyo writes that as feminist activists, we are learning feminism from rural women through three main steps: by encouraging them to articulate how they see themselves and their own intersectional issues as women of Myanmar; by facilitating their analysis of external and internal forms of oppression; and finally, by discussing how we can work together to find common ground and confront the historical marginalization of women. Working with grassroots leaders and women farmers, Rainfall is building a platform for the feminist movement and generating the same language for everyone when we say “feminism.”

For Pyo, reading and working together with scholars like Hilary has given her new perspectives, experiences and ways to re-think her own activism and the larger context for Burmese feminism. For Hilary, work with Pyo has disabused romantic notions of resistance or femininity, allowing her to recognize the pragmatic realities of intersectionality. Together, we have been surprised, humbled and delighted by our conversations with women farmers from across the country. Eating together, sweating together, traveling all night together, drinking too much coffee together – these embodied practices, and a commitment to value each other’s thoughts, suggestions, language, and skills, have enhanced both our work and lives.

It’s this sort of engagement we encourage. This is a time to rethink what it means to be an activist, NGO or development practitioner in Myanmar, to commit to listening to the daily struggles and priorities of women farmers, and to support them to represent themselves. Similarly, academics need to constantly consider the questions we ask, who we ask, and how the stories we tell reproduce certain social orders. Such conversations – with ourselves, and with others – contribute to strengthening women farmers to challenge patriarchal systems in the home, in the office, and in the paddy field.

Hilary Faxon is a currently a PhD candidate at Cornell University, where her research focuses on the politics of land, gender and environment in contemporary Myanmar. She previously co-led Land Core Group’s Land & Gender Project, and served as a technical advisor the Gender Equality Network.

Pyo Let Han is a Burmese activist, novelist, and co-founder of Rainfall Gender Study Organization. Through her writing, research and facilitation, she aims to help build an feminist movement in Myanmar.