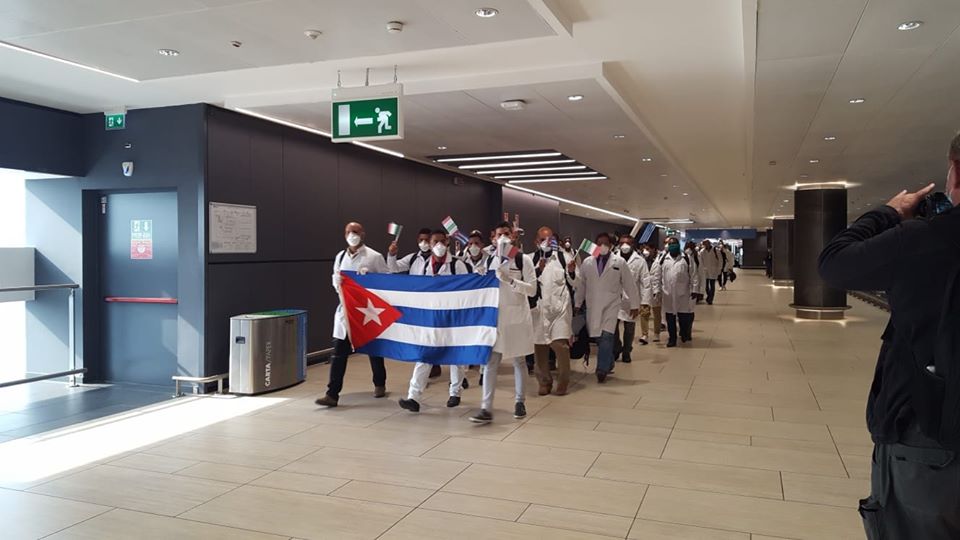 As Italy continues its battle against the global coronavirus pandemic, Cuba has sent 52 doctors and nurses to the country to help. The excellent training of Cuban doctors as well as the fact that they are used to working in precarious and high-risk situations will provide invaluable support for the Italian people.

For nearly 60 years, Cuba has been sending healthcare professionals around the world. It does this in solidarity with those in need, but also as part of a concerted campaign of medical diplomacy and to make money to help the country survive an ongoing US embargo.

Since the very early years of the Cuban revolution, its former leader, Fidel Castro, made clear that universal healthcare and internationalism would be key to the country’s strategy. Based on the socialist concept that everyone should have the same opportunities in life, Cuba believed these ideals should be applicable at the global level. The Cuban programme was born out of an interest to export its revolutionary socialist ideals, first to Africa, and later to South America and the rest of the world.

“This is a global battle, and we have to fight it together.”

Meet the heroic Cuban doctors who are putting their lives on the line to help #Italy combat the #coronavirus outbreak.

Cuba sent its first long-term mission of Cuban doctors to Algeria in 1963, a country facing a territorial conflict with Morocco. Since then, Cuba has sent more than 400,000 healthcare professionals to work in 164 countries, according to statistics published by the state media.

They have helped both in disaster relief, as well as to provide access to healthcare for those living in remote areas, for example in Venezuela and Brazil. These interventions are born out of trade cooperation agreements between the receiving country and Cuba, for which the Cuban government gets paid either in cash or in goods.

In 2019, more than 28,000 Cuban healthcare professionals were working abroad. And before the outbreak of the coronavirus, 59 countries were benefiting from Cuba’s medical internationalism. The Cuban government recently confirmed that its medical missions will be maintained and that, where needed, the services provided by their doctors would focus on combating the virus.

The national press never misses an opportunity to present Cuba’s internationalist doctors as heroes, responsible for giving hope to people all over the world who are in desperate situations. Pedro*, one of the doctors I interviewed as part of my research on the life stories of Cuban healthcare workers, explained the uniqueness of the Cuban doctors’ position:

“The doctor can be Cuban, or from another country, but not every doctor will sacrifice their life and put themselves in danger to save lives, and this without any kind of financial compensation. This is something we Cubans only do.”

Despite the admirable aspects of the programme, it has also received criticism. Some suggest the real interests of the programme are economic and diplomatic and that it allows Cuba to shift scrutiny away from its own poor human rights record.

Others have criticised what they see as the “selective humanitarianism” of the programme, calling attention to the lower numbers of doctors available to the Cuban population due to the high numbers of doctors working abroad. In my research in Cuba, I’ve witnessed long waiting times in medical centres and several of the people I interviewed spoke of a lack of continuity in doctor-patient care.

As for the doctors and nurses who take part, their participation is not always driven by solidarity but in some cases by the opportunities these missions represent for them and their families. In many cases, working on a mission will improve their standard of living when they return to the island. Many are also able to send goods such as fridges or other household appliances to their families while they are away.

Many doctors have also used the mission as a way to escape a country that is still governed by an authoritarian regime and between 2006 and 2016, more than 7,000 Cuban doctors defected to the US. Several have even accused the Cuban government of using them as modern slaves.

A moment for global cooperation

Cuba always offers its medical help, but Italy is the first developed European country which has decided to accept it.

Many global leaders have been wary of doing so, because of Cuba’s poor human rights record. The case of Hurricane Katrina in 2005 is illustrative here. Castro offered to send 1,500 doctors to the US to help with the relief effort. A special group of healthcare professionals was formed for the task called the Henry Reeve medical brigade, named after an American who supported the Cuban independence forces in 1868 and died in combat for the cause. But US president George W Bush never got back to Castro and the doctors and nurses were redeployed elsewhere. It’s this same brigade which has now gone to Italy.

In 2005, while waiting for Bush’s response, Castro made clear what should be at the centre of decisions in times of crisis:

While everyone may not agree with Castro’s revolution, perhaps this is a moment for the world to put ideological disagreements aside and focus on the global war against coronavirus by all working together.

* Names have been changed to protect the anonymity of interviewees.

Stéphanie Panichelli-Batalla is Associate Professor in Global Sustainable Development at the University of Warwick.