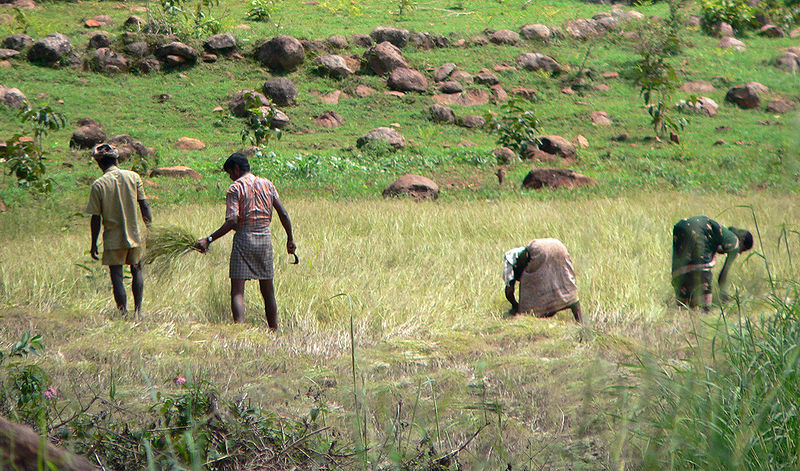 Farmers in South Asia are staring at ruin. Just as it was ripening, the winter crop was seriously damaged by untimely rainfall in March. Wheat, potato, chickpea, mustard, rapeseed and vegetables were among the crops damaged in hail and thunderstorms in India and Pakistan, while the same happened to the Aman rice in Bangladesh.

And now the peak harvesting season has been hit by the COVID-19 pandemic, with farmers unable to reap whatever had managed to survive because they can’t find either labourers to do the harvesting or transport to take the produce to market. The pandemic-induced lockdown that started on March 24 midnight has forced almost all labourers to stay at home or in quarantine centres. There are strong indications that the lockdown will be extended beyond April 14, the scheduled end-date now.

Apart from being unable to take their products to market, farmers cannot get their harvesting machinery repaired because most of the repair shops are closed.

In India some state governments have belatedly woken up to the crisis and have declared agriculture an essential activity that can be continued through the lockdown. But that message has not reached either the labourers or the policemen who are enforcing the lockdown by beating anyone who steps out of home. The state government of Uttar Pradesh ordered all wholesale agricultural markets reopened, but in at least one district, the local authorities decided the only safe time to open them was between 2 and 5 in the morning.

The result is that very few farmers can get their products to market. This comes after north-western India –the main grain growing area in the country – received 80% more rain than the March average, and central India more than twice the average.

March 2020 has been one of the rainiest on record in India. The 46% excess rainfall in the entire country contains grimmer numbers. The India Meteorological Department (IMD) reported that north-western India had 235% excess rain between March 26 and April 1. This seriously damaged the wheat crop ready for harvest. In central and eastern India, the rainfall in the second half of March was nearly double the average. Heavy rainfall earlier in the month caused damage to the mustard and potato crops in Rajasthan, Haryana and Uttar Pradesh.

In Uttar Pradesh alone, crops worth nearly INR 2.55 billion (USD 33.6 million) were damaged by hailstorms and heavy rainfall across 35 districts by the middle of March, affecting more half a million farmers, reported Skymet, a private weather forecaster.

Erratic rainfall due to a changing climate has added to India’s farm distress in recent years. Changing rainfall patterns not only lead to extreme weather events such as floods and droughts but unseasonal rain or dry spells also harm food production, studies by IMD show. In 2015, for example, excessive rainfall and hailstorms in March in northern India led to extensive damage to the winter crop.

Smallholder farmers in particular were, in fact, staring at two loss-making cropping seasons in a row when the coronavirus effects hit them.

Current crop damages follow the losses farmers suffered during the 2019 autumn harvest. The Southwest monsoon was extremely erratic last year. Prolonged dry spells in June and July were followed by heavy rainfall in August and September, hitting smallholder farmers in particular. Production of rice and soybean declined by 12%, a Skymet report showed.

As for this year, “The [winter] crop has suffered irreversible damage in eastern Uttar Pradesh,” said Sudhir Panwar, president of Kisan Jagriti Manch, a farmers’ association.

Poor planning of the lockdown led to panic among daily wage labourers, triggering a widespread migration not seen in India since the partition in 1947. This has resulted in an acute shortage of farmhands. Although harvesting is largely mechanised in the north-western India, farmers depend on seasonal migrant labour for sheaving, loading and transporting grain.

Farmers are even finding it difficult to operate mechanical harvesters due to a shortage of drivers. Elsewhere in the country, there is labour scarcity in milk processing plants, cold storages and warehouses.

Into the third week of the lockdown, supply chains remain disrupted across the country. Thousands of lorries are still stuck at various inter-state borders despite orders to let them move. Livestock feed is also in short supply, plunging poultry farmers into a deep crisis.

“There is no supply of chicken because the Gazipur mandi (wholesale market) is closed,” said Idris Mohammad, a meat seller in Noida on the outskirts of Delhi. The Gazipur wholesale wet market is the largest in the national capital region. “We’re are hearing reports of poultry farmers burying chickens in the farmyards because they cannot arrange transport,” Mohammad said.

Farmgate prices have crashed in many places due to the supply bottlenecks. Tomato growers in Maharashtra were receiving only INR 2 (2 US cents) per kg, vegetable prices in Punjab have fallen to INR 1 (1 US cent) per kilogram from INR 12 (16 US cents) per kg. Egg prices in Tamil Nadu halved from INR 48 (63 US cents) a dozen to INR 24 (32 US cents), according to media reports.

Talking about the situation created by the lockdown on top of a poor season, agricultural economist Devinder Sharma said, “Agriculture cannot be in a lockdown condition. Unlike industry, where you can pull down the shutter and then open it up after three months to start production, agriculture is a continuous activity. There is no shutter to be pulled down.”

“Vegetable growers are the worst hit in the lockdown,” Sharma said. “It’s time to urgently set the supply chain right.”

Vegetable farmers are uprooting their crops as there are no takers for their produce, according to Ramandeep Singh Mann, an agriculture activist. “Such scenes are visible across India,” Mann said on Twitter. “The supply did not falter, but the demand and the supply chain gave in.”

Despite the problems, India is unlikely to face any food shortage in the near future. The country’s food grain output is projected to be about 292 million tonnes in 2019-20. The total stock of wheat and rice with the government-owned Food Corporation of India (FCI) stood at 88 million tonnes in March, official data show.

The buffer norms for food grain stocks, which include operational stock plus strategic reserves, is set at 21.04 million tonnes. Similarly, for lentils, the main source of protein among the poor, India had a stock of 2.25 million tonnes in mid-March. The country has enough stock of food grains to supply its citizens for more than a year. The reserves are not as comfortable in Pakistan or Bangladesh.

However, in all south Asian countries, damaged harvest and inability to sell produce at reasonable rates are likely to squeeze income in rural households. Since more than 80% of farmers in India are smallholders, they are unable to withstand such earning shocks. In times of a pandemic, any unanticipated medical expanses could see them slide back into poverty and destitution.

The COVID-19 pandemic could see as many as 195 million job losses in the world, The International Labour Organisation (ILO) said in a report this week. “In India, with a share of almost 90% of people working in the informal economy, about 400 million workers in the informal economy are at risk of falling deeper into poverty during the crisis,” the ILO report said.

This article was originally published in The Third Pole with the title ‘Farmers hammered by unseasonal rain, Covid-19 lockdown‘.