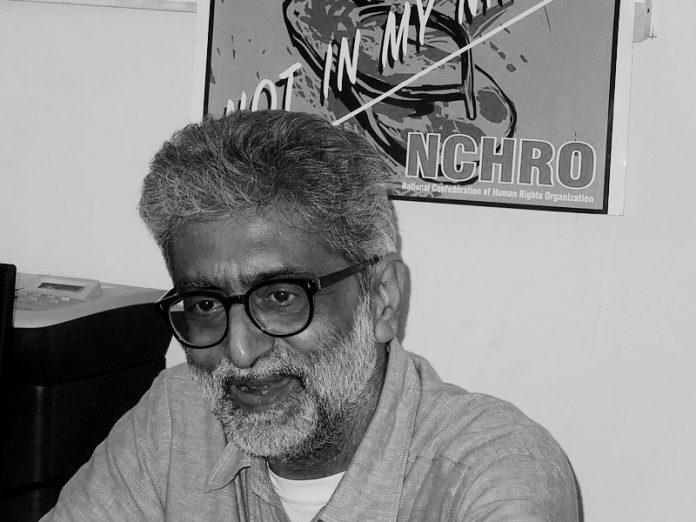 On Monday, 25 May, prominent human rights activist, Gautam Navlakha, whom the National Investigation Agency (NIA) arrested last month in connection with the Elgar Parishad or Bhima Koregaon case, was whisked away from Tihar Jail in Delhi to Mumbai.

This was done without the knowledge of his lawyers or family, and despite his interim bail application remaining pending with the Delhi High Court. In Mumbai, a special NIA court sent him on judicial custody till 22 June, and he is now lodged in Taloja jail where an inmate recently died of COVID-19.

The lawyers of Navlakha, who is a patient of colonic polyposis, chronic gastritis and high blood pressure, had filed a plea before the Delhi HC to grant him interim bail in light of the COVID-19 pandemic. The court, on 28 May, pulled up the NIA for showing ‘unseemly haste’ in transferring Navlakha, who has been booked under the stringent Unlawful Activities Prevention Act (UAPA).

The following is a statement issued by the Delhi-based Peoples Union for Democratic Rights (PUDR) condemning the recent transfer of Navlakha from Delhi to Mumbai.

People’s Union for Democratic Rights is aghast at the National Investigating Agency (NIA) surreptitiously whisking away Gautam Navlakha from the Tihar Jail to Mumbai on 25 May 2020, without informing his lawyers or his family. 67-year old Gautam Navlakha was arrested by the NIA in the Bhima Koregaon matter, the infamous case that has become the vehicle to arrest human rights activists: journalists, academicians and lawyers critical of government actions. Gautam Navlakha had surrendered on 14 April and was lodged at Tihar Jail since 25 April 2020.

This secretive action by the NIA reeks of malafide intentions. The happenings over the last few days bear this out.

1. On 22 May the High Court at Delhi heard an interim bail application by Gautam Navlakha made in the context of his ailments, health issues and age, and the growing fear of the spread of Covid-19 in the jail. The court had directed the prosecution to submit a status report by 26 May. The Tihar jail superintendent was also directed to furnish a separate report on his health situation and the matter was listed for hearing four days later on 27 May, upon request by the NIA counsel. The NIA had assured the court that all necessary measures would be taken to keep Gautam Navlakha safe in the prison.

3. On 24 May, Gautam Navlakha informed his family that he had been given a single cell in Tihar jail in keeping with his medical condition.

4. On 24 May itself, which was a Sunday, the NIA obtained from the Special Court at Greater Mumbai, without informing Gautam Navlakha or his lawyers, an order for his production at Mumbai. The application made by the NIA before the Court is not available and it cannot be ascertained whether the Mumbai Court was informed of the interim bail matter to be heard on 27 May in the context of his health and the ongoing Covid-19 pandemic. The order was sent to the Tihar jail superintendent for further action.

5. Early on 25 May, a gazetted holiday, the NIA Special Court in Delhi allowed the email request sent from Tihar jail for permitting the transfer of Gautam Navlakha to Mumbai. It is unclear whether this email request mentioned the pendency of the bail matter before the High Court or the concerns regarding his health, even though the Delhi High Court had directed Tihar to file a medical report given Gautam Navlakha’s high blood pressure and other ailments.

6. After the conduct of these one-sided proceedings for 48 hours, Gautam Navlakha’s family received phone calls on the afternoon of 26 May stating that he had been brought to Mumbai by train and produced before the NIA Court there. Gautam Navlakha informed his family that he had been given all of five minutes to pack up and leave the previous afternoon. He also stated that the process of being transferred to Mumbai in an overnight train without being allowed to contact his lawyer and family affected his health and that his blood pressure had shot up alarmingly.

7. The proceedings at the Mumbai Court also took place in the absence of his lawyers. Gautam Navlakha was directed to be sent to Taloja Jail in Navi Mumbai, where at least one death has occurred due to Covid-19.

8. News reports state that the Taloja Jail Superintendent has said on 26 May that they will keep Gautam Navlakha in a quarantine centre at Gokhale High School at Taloja for 14 days.

The account provided above makes it amply clear that this action of undue haste by the NIA to transfer Gautam Navlakha to Mumbai can only be viewed in the context of his pending interim bail plea to be heard on 27 May. The hastiness finds no basis since neither was his presence required before the Court in Mumbai in any proceeding on any forthcoming date, nor did the police require him for custodial interrogation. And this action effectively renders Gautam Navlakha’s bail application meaningless.

The NIA also acted secretively by keeping him and his counsel completely in the dark. Additionally, it remains unclear whether the information of the pending hearing at the Delhi High Court was even shared with the judge who issued the production warrant at Mumbai, or the judge in Delhi who allowed the request to transfer Gautam Navlakha to Mumbai. Finally, despite undertaking before the High Court to the contrary, the NIA have put Gautam Navlakha’s health at risk by subjecting him to unwarranted exposure and transferring him to the state and city that is facing the Covid-19 crisis in the most serious manner. His communication with his family does not suggest that he received necessary prescription and medicines for his travel to Mumbai.

PUDR expresses grave concern regarding such actions by a top investigation agency of the country. We express hope that judicial authorities will take cognizance of such unethical and malicious actions by the NIA and pass necessary orders to undo the wrong and to prevent such violations in future. We call upon all democratically-minded people to express their opposition to these reprehensible actions.

Peoples Union for Democratic Rights (PUDR) is a is a Delhi-based civil liberties and democratic rights organisation. They can be contacted at pudr@pudr.org.