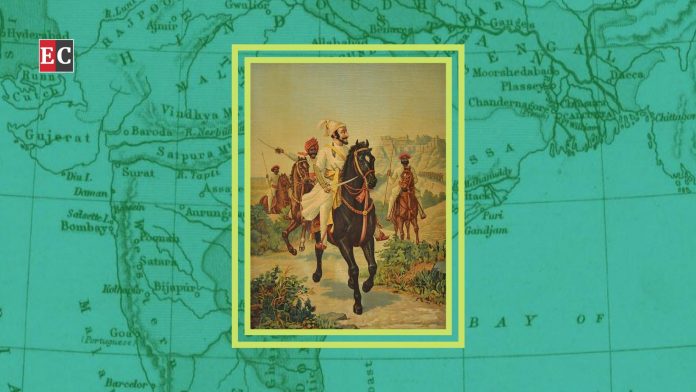 Men and women who attain greatness are often found to be standing on the crossroads of facts and legends in the collective imagination of the people. Chhatrapati Shivaji Maharaj was one such man.

He was no ordinary ruler, in the manner in which he carved out his kingdom out of almost nothing, developed his own administrative system and established his position in the contemporary political landscape. He could do all of this because he was able to communicate his vision to the ordinary Marathas so effectively that they fiirmly identified themselves with his cause, not hesitating even to embrace death whenever called for.

The unquestioned devotion and loyalty came from the understanding that the task undertaken by him was invaluable. It had to be successfully completed. Whatever sacrifice was required, they would make it. Not just the warriors, but the common men and women, ryots (cultivators and land tenants) and peasants did their bit for a greater cause.

This is best exemplified by the folk lore of a 10-12 year old boy who confronts four unknown soldiers in the outskirts of his village. Coincidentally, one of them turns out to be Shivaji himself. The boy had never seen Shivaji and was guarding that patch of land on his own without being asked to. He was contributing his bit to Shivaji’s mission, facing the obvious risks.

Shivaji’s politics of empowerment and liberation has to be seen in the context of the contemporary political set-up. That was the time the ryots firmly believed that kings were looters and the change of a ruler was immaterial to their wretched existence. Shivaji made a difference to their life, and they could see and feel this.

Shivaji’s mission was not just one of empire-building, but also one of social change that is evident from his treatment of his subjects. He exercised power to help the ryots. They could see the king with their own eyes and talk to him. No wonder they made both the king and his mission their own.

Also read ‘The Violent Origins of the Land of Ahimsa‘

According to Sabhasad Bakhar, the biography of Shivaji written by Krishnaji Anant Sabhasad at the court of his son Rajaram in 1697, “… Maharaj destroyed the mansions and fortresses of the Deshmukhs, Despandes who had enslaved the ryots ….”

Moreover, he made the “untouchables” and Mahars the chief of his forts. His Chief of Intelligence was Bahirjee Naik from Ramoshi community. Why would a man like Shiva the Barber embrace death to save his leader Shivaji from the clutches of Siddi Jauhar?

In feudal times, women, especially poor women, were sexually oppressed and exploited. Shivaji’s time could not be an exception to this. His attitude makes him different form his contemporaries. The punishment meted to the Patil of Ranjha village is well chronicled. He had raped a poor peasant’s daughter who committed suicide. Shivaji had him arrested, brought to Pune and ordered his hands and legs to be chopped off without delay.

The people of Mavel province could not believe their eyes or ears. In 1678, Sakuji Gaikwad laid siege on the Belawadi Fort, occupied by Savitribai Desai, who defended it for 27 days. Finally, Sakuji succeeded in conquering it. Inebriated with victory, he raped Savitribai. Shivaji, on hearing this, was so enraged that he punished Sakuji by blinding him. He did not pardon a rapist even though he was his own victorious general.

Then there is the celebrated story of the daughter of Subedar of Kalyan, Mulla Ahmed, who was presented to him as a gift in his court by his victorious general. His famous sentence was “If only my mother was so beautiful… !” He apologised and returned her with gifts. In fact, Shivaji ordered that no woman was to be made concubine. That was really progressive in his time.

The ethical foundation of Shivaji’s administration was carefully laid down. These can be found in the commands signed by Ramchandrapant Amatya, his Finance Minister and a member of the Council of Eight.

“The wood of mango and jackfruit tree can be of great use for the navy. But do not allow anyone to touch them.… Even if a tree is found dying it should be bought from its owner, that too after he is persuaded to part with it and he is totally satisfied.” V K Rajawade, in Aitihasik Prastavna writes. According to him, when Shivaji was camping near Chaplan in 1673, he wrote to Bhavani Shankar, the jumledar, about the ‘dos’ and ‘don’ts’ for his officials.

“You have been given money. Whatever is needed must be bought from the market by paying cash. If you do not do so and harm the people, they will feel that the Mughals were better,” Shivaji had said.

The concern shown by him for his ryots as shown in his letter of 5 September 1676 to Ramaji Anant, Subedar of Prebhavali Province, makes his state nothing less than a welfare state: “They should be paid cash enough to buy a pair of bullocks and grains to eat. Let them till the land as much as they can. No interest should be charged on this loan…”

At a time when the armies of the rulers treated their own people as slaves, Shivaji’s soldiers behaved in an impeccable manner. How was he able to transform his army?

Although Shivaji had a standing army, most of his soldiers were practicing farmers and lived with their families. A person having living relations with land as a peasant does not turn into a looter. It did not mean his army did not loot anything anywhere. The loot of Surat is well known. But what was looted was wealth and as a necessity.

Moreover, he gave up the widespread practice of ceding a part of the loot to the soldiers and instead, began a new practice of depositing the looted thing into the treasury and paying wage for the soldier’s work. There was no vested interest for the soldier to loot any longer.

Shivaji was a Hindu and he believed in his religion. But as a king, he did not treat Hindus in one way and Muslims in another. This is proved beyond doubt by the number of Muslims in his service, including those who died for him. The late writer, Govind Pansare, has named 13 prominent Muslim commanders and soldiers under Shivaji.

His personal bodyguards Madari Mehtar and Hiroji Farjand sacrificed their lives in saving him from Aurangzeb’s captivity in Agra in 1666. His Sarnobat or Chief of Infantry was Noor Khan Beg. In 1648, around seven hundred Pathan soldiers from Bijapur army came to join Shivaji. His chief justice Raghunath Pandit Rao writes in a letter on 2 November 1669:

“Shrimant Maharaj has ordained that everybody is free to follow his religion and nobody is allowed to disturb it.”

Khafi Khan’s Muntakhabu-I-Lubab notes, “Shivaji had made a strict rule that wherever his soldiers went they were not to harm mosques, the Quran or the women.”

Nevertheless, Shivaji was a product of his times, a believer in some of its sensibilities. The longing for social and religious sanction to his enthronement points to his vulnerability before the inequalities imposed by the varna (social hierarchy) system. Thus, he allowed Gaga Bhatta of Benaras to perform his maunji bandhan (Brahmin thread-wearing ceremony) at the age of 44, only to counter the objection that he had lost his sanskaras (traditions). He even went for a second coronation three months after the first one.

Shivaji, thus, was a complex figure who both challenged and upheld the social, political and cultural diktats of his times.