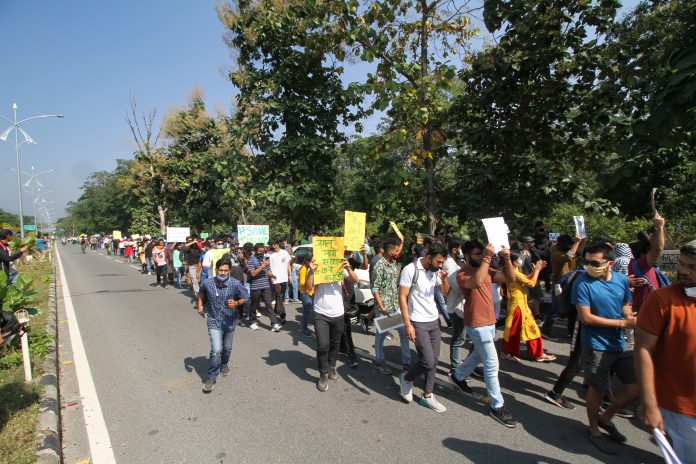 Many even tied the Raksha Sutra – a sacred thread for ritualistic protection – around the wide girth of old trees, while hundreds of demonstrators reproached in the background “Pedh katna band karo” (stop cutting the trees).

More than 20 voluntary organisations, community groups and commoners came out on Dehardun’s street on 18 October and 8 November to register their protest against the axing of 10,000 trees of Thano Reserve Forest. These protesters, numbering around 1200, were all residents of Dehradun, Rishikesh, Haridwar, Thano, Doiwala and other nearby towns.

The protests began after the Bharatiya Janata Party (BJP)-led Uttarakhand Government sent a proposal on 8 September seeking approval from the central government to clear 87.0185 hectares of Thano forest land to expand Dehradun’s Jolly Grant Airport. The airport that currently spreads over 132.09 hectare of land has already consumed 70 hectares land from Thano Reserve Forest in 2003.

Currently, the airport has a 2140 meters runway. The project aims to extend the same by 650 meters eastwards towards the deep forest. This is largely because the government plans to make it an international airport in the future. This also includes demanding forest land for constructing new terminal buildings and allied facilities. By doing so, the government claims to build capacity to handle an annual traffic of 1300 passengers per hour as opposed to current terminal building capacity of 250 passengers per hour.

Karan Kapoor, President of Making a Difference by Being the Difference (MADbyBTD), says:

“The stunning British-era Sal trees of Thano are precious to Dehradun’s climate. How can an international airport be sustained in drastically changing weather conditions? Moreover, who can count the economic benefits of international flights running in full capacity during a pandemic outbreak when even national flights were falling short of passengers in normal time?”

MAD, a voluntary organisation of teenagers and youngsters, is actively striving to protect the environment in Dehradun valley. In their latest effort, the youngsters held a “Biodiversity Parade” on 8 November within the city to pressurise the authorities to realise the importance of Thano’s rich forest diversity.

Dehradun-based anthropologist and activist, Lokesh Ohri, says, “We want economic opportunities for Uttarakhand. But we all must have zero-tolerance for any more tree felling”.

Rajni Bora, who works with Project Paani of Mitti Foundation, also feels that “since Uttarakhand is facing an acute water crunch, it cannot afford further deforestation.”

“Destroying forests is destroying essential sources for our present and future survival,” says Ridhima Pandey, a 12-year-old environmental activist fighting to save Thano forest. Three years ago, Ridhima captured the attention of international media when she filed a case against the Indian government for failing to tackle climate change.

“In the current climate crisis scenario, the minutest of forest area is worth saving!… and here we have 87 hectares of forest land. The entire area is highly eco-sensitive,” laments Ashish Garg, President of Eco-group, a collective of hundreds of environment-conscious residents of Dehradun that conducts plantation and climate change mitigation activities at a local level.

The airport expansion project comes within a 10 km radius of the eco-sensitive Rajaji National Park. Several elephant corridors fallswithin the project’s 1 km range. The forest is part of the Shivalik Elephant Reserve and Indian elephants are granted the highest possible protection under Schedule I of the Wildlife Protection Act, 1972.

Despite this, the EIA Report by Airport Authority of India denies the existence of any Schedule-I animals in the targeted forest. The report mentions ‘least concerned species’, but skips inventorying highly protected species like elephants, leopards and others.

Anchal Sharma, an online Save Thano Campaigner who gathered more than 33,000 signatories on her petition on change.org, calls this ridiculous. She says, “At night, herds of elephants hold up traffic to cross the road around the forest.”

Out of the proposed 87 ha. area, 47 ha. is moderately dense forest. But, Section 4.10.1 of the EIA Report claims the forest to be barren, implying presence of minimum biodiversity. Ironically, the Uttarakhand Forest Department had organized a birding camp in 2015 where it recorded 104 bird species in Thano Forest.

The government has also certified that no animals will be harmed during the process. To this, Kapoor says:

“Our organisation has spoken to several high ranking officers and experts. Everyone said that Schedule-I fauna exists there. Elephants migrate from Rajaji National Park through Thano forest towards Tanakpur along the Uttarakhand-Nepal border. A river crossing through the area is a drinking source for animals. Then how won’t animals be impacted?”

The expansion is also threatening the water quality of Doon as the Jakhan Rao River flows 0.4 km to the east of the project site, while the Song River flows 2.8 km towards the southwest.

According to Kapoor, “The project initiated in 2018 slowed down in 2019 but paced up rapidly in 2020. Most of the permission letters and documents date between April and June 2020, that is, during the lockdown period. The commoners came to know about this big step now.”

Jagdamba Prasad Maithani, founder of a grassroots voluntary organisation, AAGAAS Federation, says on a parallel note, “Species identification is long-winding, but this scientific process seems to be fast-tracked. They have claimed that only 16-17 tree species would be impacted, while I fear there are thousands of species that will be adversely affected.”

Recently, the Uttarakhand Chief Minister, Trivendra Singh Rawat, said that the chopped trees will be compensated with three times plantation in another area. MAD has made a video countering the government’s compensatory afforestation plan.

“Under CAMPA, forest department is already falling short by 9 thousand hectares of land for reforestation. This equates to 10 thousand football fields! Now, how are they planning to allot more land to compensate the forest they will be cutting?”

“Several governmental programs are promoting tree plantation. But if we are failing to conserve our existing forests, then what is the relevance of such programs?” asks Ridhima. She has her doubts about the survival rate of proposed plantations.

“It does not matter how many saplings are planted on record; it matters how many survive. Even if few successfully survive, they cannot be equated to a full-fledged 100-year-old tree providing oxygen and habitat to several species.”

Bora says, “To compensate the tree loss, plantations should have started 4-5 years earlier.” Further, according to Maithani, “Around 124 Bel Patra trees will be massacred in Thano forest. Since these are very slow growing species, such loss seems irreplaceable.”

The Uttarakhand government has released a notice justifying the many benefits of the airport expansion project, including easing rescue operations. Kapoor responds to this:

“The given justifications is not aligning with the government’s own objectives. They have designed an action plan to reduce air pollution near Rishikesh. Ironically, the forest they desire to ravage is near Rishikesh.”

The Airport Authority of India (AAI) plans to use the airport as night parking to divert traffic from Delhi Airport. But Dr Nitin Pandey, the chief coordinator for Citizens For Green Doon (CFGD), says, “The upcoming Jewar Airport in Greater Noida, which is twice the size of Indira Gandhi International Airport, has enough parking space for airplanes. An aircraft in Delhi can easily park there instead of flying an hour to Dehradun.”

The government has further justified the project on tourism and local livelihood gains. To this, Dhunta says:

“International tourist can easily reach Dehradun from Delhi by driving, as time between the two cities has narrowed down by 2.5 hours. We have already sacrificed a large number of trees for all-weather roads and the Delhi-Dehradun expressway. Losing natural beauty will ruin tourism prospects by polluting the town like metro cities.”

On the need for an expanded airport for rescue operations, Kapoor reasoned, “Rescue operations in hilly terrain of Uttarakhand are conducted using helicopters. We have two major helipads in Dehradun. These were effectively used during the 2013 Kedarnath flash floods.”

Another justification is to use the airport as Air Force base, considering the proximity of Uttarakhand to the sensitive India-China border. On this, Kapoor says:

“Uttarakhand has five airstrips for air force operations. The Indian Air Force is also seeking land for a new airport in Chaukhutia. We have commercial airports in Pithoragarh and Gauchar, closer to India-China frontier. Now how many airbases do we want for a hilly state like Uttarakhand?”

His apprehensions are not unfounded as Dehradun falls under seismic-zone IV is severely vulnerable to earthquakes.

No alternative plan from the government

“The state government was in the process to de-notify Thano Forest Reserve. Since the EIA report itself mentions the proposed extension lies in the Reserve Forest, NWB did not agree to de-notify the forest.”

On 9 October, Assistant Inspector General of Forest, Sandeep Sharma, wrote a letter to Uttarakhand Forest Department asking to submit an alternate plan. “But till now, no alternate plan has been submitted by the department,” Joshi says.

However, community organisations are proactively offering alternate plans. Lokesh Ohri has campaigned for natural preservation of Doon Valley since long. He says, “If the government wants, we are ready with scientific alternative plans that will meet both objectives – ecology and economy.”

Garg, who is an engineer, proposes to extend the runway towards the west of the airport, which is sparsely populated, rather than intruding eastwards into the forest. Most of the experts and activists agree with this idea.

However, the Chief Minister has already dissed this alternate plan, arguing that the land to the west is possessed by persons rehabilitated after the Tehri Dam construction. Joshi responds, “These few people can be rehabilitated once again, but 10,000 trees cannot!”

Garg suggests liberal compensation to the displaced people in trade of their land. He and his eco-group have now emailed the suggestive plan to the Ministry of Civil Aviation.

The only alternative the government offers is constructing a green terminal building. To this, retorts, “Green building is appreciable, but cannot compensate for lost forests.”

Along with the submitted proposal, the Dehradun forest department has also submitted a Wildlife Mitigation Plan for clearance to the Chief Wildlife Warden. The plan insensitively blames elephant movement for man-animal conflict and suggests elephant-proof wall as a quick fix.

Kapoor reacts, “Such walls will worsen the situation as elephants may find an alternate route. They may enter nearby colonies and farms. This will lead to multi-fold conflicts”.

Ridhima, in tune, says, “Once animals intrude human habitats, we declare them as threat to people and try to shunt them down. But the truth is we are the one causing this conflict, not them”.

For now, the state government is silent on alternatives, while the fate of 10,000 trees, hundreds of elephants, birds and other wildlife hangs by a thread.

is a Dehradun-based independent researcher, exploratory writer and author of Stories of Success: Narratives from a Sacred Land. She writes on environment, climate change and concerned policies.