Home Environment Coal Mining in Dehing Patkai: The ‘Amazon of the East’ Must Be... 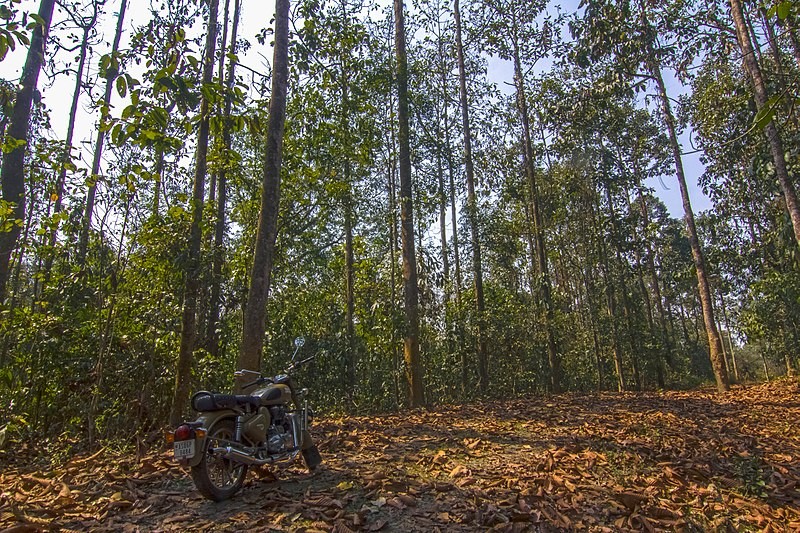 The year 2020 has been no less than a roller-coaster ride, but for all the wrong reasons. Bush fires killing over a billion animals, communal riots, earthquakes, volcanic eruptions, cyclones and a viral pandemic – it has been one rough ride so far.

There was already a looming economic crisis for many countries around the globe, but this virus has made conditions even worse. Now, as the COVID-19 crisis continues to flare, the Northeast Indian state of Assam faces a new disturbing challenge.

Last month, the National Board for Wildlife (NBWL), which falls under India’s Union Ministry of Environment, Forests and Climate Change (MoEFCC), gave its approval to the North Eastern Coal Field (NECF) for coal mining in Saleki Proposed Reserve Forest (PRF), which lies very close to the Dehing Patkai Wildlife Sanctuary (WLS) and an elephant reserve of the same name.

The move has triggered massive online protests, mobilised by environment activists who fear severe ecological degradation in the environmentally-sensitive area due to mining activities. The Chief Minister of Assam, Sarbananda Sonowal, has said that the government is assessing the situation and is “committed to protect Assam’s environment and biodiversity”.

Covering an area of about 111.19 square kilometers, flanked across the states of Assam and Arunachal Pradesh, Dehing Patkai is named after the second largest tributary of Brahmaputra river in Assam, Dehing (or Burhi Dihing), and the Patkai hill range in neighbouring Arunachal Pradesh. It straddles the Dibrugarh, Tinsukia and Charaideo districts of Assam and Tirap and Changlang districts of Arunachal Pradesh. Tirap district also shares a border with the state of Nagaland and has an international border with Myanmar.

As having grown up in the upper reaches of Assam, this rainforest-cum-wildlife sanctuary, also referred to as the ‘Amazon of the East’, holds a very special place in many of our hearts. It is home to several endemic species of flora and fauna and is an orchid heaven, given the ideal location and climatic conditions.

I have grown up in Duliajan, an oil township in Dibrugarh district, the residents of which are supplied with the water of the Dihing River. Most of us have memories of going for picnics by the riverside. After crossing this river, one would enter Naharkatiya, another small town on the southern bank of the river, which has some of independent India’s first oil wells.

Beyond Naharkatiya, after crossing several ‘beels’ or wetlands across both sides of the roads, lies Namrup, another industrial township responsible for providing power in some of the upper Assam towns. A few of these beels are being promoted as ecotourism projects under Corporate Social Responsibility (CSR) initiatives of various Public Sector Enterprises (PSEs) situated in the region. The Jeypore range, one of the three parts of the Dehing-Patkai Wildlife Reserve, lies near the towns of Naharkatiya and Namrup.

Digboi, a town responsible for putting India on the oil map, is also nearby. Like many others, I too have memories of visiting this quaint little township, which operates Asia’s oldest oil refinery, innumerable times with family and friends. An hour’s drive from Duliajan, one has to cross a stretch of the Dehing-Patkai reserve to reach Digboi. During this journey, It is fairly common to chance upon herds of elephants crossing the road or spot the rare Hoolock Gibbons.

Another township, called Margherita, which was named after the Italian queen by an engineer who had come to supervise the laying of railway tracks in this resource-rich area for transportation of coal. Coal India Limited (CIL), which is caught up in the current controversy, has big coal plants here.

The British were also responsible for laying the first railway track in Assam for transporting coal and tea in 1882. It was laid in Makum, situated in Tinsukia district, which consequently operated Assam’s first railway junction and is not very far from Margherita. Oil was discovered in 1889 in Digboi.

Why did I care to mention these details? Because it is necessary to know them to fully comprehend how eco-sensitive these places are. The forest ranges work similar to the idea of a watershed – they are demarcated for various purposes, be it commercial, community or administrative uses. These towns and many other villages around the revered forest area is home to many tribes, especially the sub-tribes of the ethnically diverse Tai tribe, such as Khamti, Turung, Phake, and Ahoms.

According to the recent NBWL approval for coal mining in Assam, 98.59 hectares of land from Saleki PRF will be mined for coal. So far, most of the news reports and social media posts on the issue have stated that Saleki falls within Dehing Patkai. But a recent report by Sentinel Assam suggests that it does not fall within the Dehing Patkai WLS, “but very much within the ‘Eco Sensitive Zone’ as the area lies within 10 km radius of the wildlife sanctuary and within the Elephant Reserve”. According to the Digboi Divisional Forest Officer, Saleki is located 9.1 km away from the Dehing-Patkai WLS.

According to reports in the media, illegal mining is already going on near Margherita and Ledo in Assam. One of these tactics used is rat-hole mining, a practice otherwise widely prevalent in the East Jaintia Hills in the neighbouring state of Meghalaya, despite a ban by the National Green Tribunal (NGT). The dangerous tactic has its own hazards. In 2018, fifteen miners perished inside one rat hole mine in Meghalaya.

At the centre of the controversy is NBWL – an advisory body chaired by the Prime Minister. Here, it is worth noting that its current chair, Prime Minister Narendra Modi, received the coveted UN Champion of the Earth Award in 2018. Yet, under his chairmanship, the NBWL seems to have been largely dormant.

Under provisions of the Wildlife (Protection) Act, 1972, the NBWL has to meet at least twice a year for policy-level discussions. But it has not met even once since 2014. On 7 April, when the country was amidst the first phase of the lockdown, Union Minister for Environment, Prakash Javadekar tweeted that the standing committee of NBWL had given out wildlife clearances for a number of developmental project proposals submitted by eleven states. Ironically, Javadekar also tweeted on 22 May – International Biodiversity Day.

In December 2019, the environment ministry released the India State of Forest Report (ISFR) 2019 in two volumes, a biennial report prepared by the Forest Survey of India (FSI). It claims that there has been an increase of 5188 sq km in the total forest and tree cover in the country. Out of this, the increase in the forest cover has been observed as 3976 sq km and that in tree cover is 1212 sq km.

Forest cover is divided into Very Dense Forest (VDF), Moderately Dense Forest (MDF), Open Forest (OF) and Scrubs. As per ISFR 2019, Arunachal Pradesh has recorded a decrease in the forest cover by 276.22 sq km whereas Assam has seen an increase of 221.51 sq km as compared to the previous assessment reported in ISFR 2017.

The biodiversity of trees, shrubs and herbs in different forest types across all the states and Union Territories is assessed using the Shannon-Weiner Index. It is found that the species richness for shrubs is the highest for Arunachal Pradesh. The state ranks second in the country in terms of species richness for herbs. Consequently, Arunachal Pradesh and Assam come under the top five states for shrubs and herbs. The report further states that Arunachal Pradesh has the maximum richness of species when all the three types (trees, shrubs, herbs) of plants are taken into account.

But the government’s e-green watch portal has no data on satellite imagery of tree plantation drives carried out by the government for the states of Assam and Arunachal Pradesh. Forest falls under concurrent list of the seventh schedule of the Indian Constitution. If there is a conflict between the centre and the states over forest-related matters, the central law gets an upper hand.

Forests have been an integral part of the tribes in India and with climate change, management of forests by these people become even more crucial. One must never forget that they have been living in these areas from time immemorial and traditional knowledge systems are testimony.

India ranked 5th in the Global Climate Risk Index report released by Germanwatch. Despite poor rankings in some of the most important indices related to climate change, hunger, health, education, and gender equality, India is heading towards a catastrophe that could unfold right in front of our eyes if such projects get cleared one after the other.

Dehing Patkai is called ‘Amazon of the East’ for a reason. It is a natural sink that is sequestering huge amounts of carbon, thus maintaining the required temperature levels. Even then, over the past few years, people have been complaining about soaring temperatures. The mighty Brahmaputra river, not very far off from this forest, is known for wrecking havoc through floods every year in downstream Assam. It is one of the most seismically active zones in the world.

Bulldozing these virgin areas is bound to have an everlasting impact on this region and its people. South Asia is already witnessing the emergence of climate refugees. Greater ecological destabilisation would only aggravate the situation. Reckless developmental projects tend to create a conflict between economy and ecology. If India continues to clear them without proper assessments, it can never achieve its eight targets under the National Action Plan on Climate Change (NAPCC), one of which specifically talks about the National Mission for Sustaining the Himalayan Ecosystem.

In Duliajan and other nearby townships of Assam, young poets, writers, singers and songwriters are doing their bit to raise awareness towards the proposed mining project in Dehing Patkai. Online activists have floated hashtags such as #IamDehingPatkai, #SaveDehingPatkai, and #SaveAmazonOfTheEast.

Popular Assamese icons have spoken out too.

Recently, locals spotted slow loris – a rare nocturnal primate found in Assam – roaming about residential colonies. They are believed to have have come from the nearby Dehing Patkai WLS. Leopards and elephants emerging in tea gardens or within residential areas are quite common in this part of Assam, and so are instances of man-animal conflict. But nobody wants to see a spike in such incidents.

One is reminded of Pablo Neruda’s poem, Keeping Quiet, which talks of introspecting oneself and developing a feeling of mutual understanding and altruism, necessary for the survival of humankind. Neruda talks of green or environmental wars, caused by anthropogenic activities bound by a hunger for power, pushing life to the brink of extinction.

But the perpetrators of war are often found walking, putting on clean clothes and deciding the future course of action which would affect communities and countries.

It is time we hold our powerholders answerable to questions that are critical to the survival of the planet and its natural ecosystem. It is time to raise our voices for Dehing Patkai.

Zeba Zoariah Ahsan is a water professional. She was previously helping the Meghalaya government in preparing the State Specific Action Plan (SSAP) for water sector.

is a Media Fellow at The Energy and Resources Institute (TERI), supported by the Earth Journalism Network. She was previously associated as a water sector analyst for the preparation of State Specific Action Plan (SSAP) on water for the Government of Meghalaya.