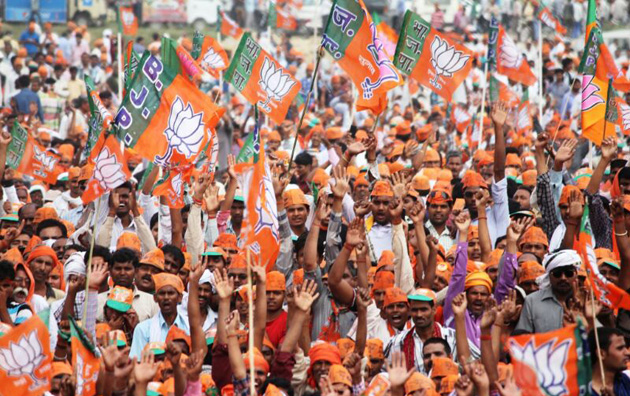 Hindutva neoliberalism in India is a specific variant of capitalism that enforces economic and political oligarchy in the name of ethnic and majoritarian nationalism.

It liberalises markets for few to establish dominant corporate monopolies. It does not allow complete free market competition as a distributive mechanism, but only a few crony corporations to control the production processes, coordinate the distribution mechanisms, and determine the nature of demand and supply in Indian economy.

The laissez-faire led ideological narratives of neoliberalism around ‘free individual’, ‘freedom of choice’ and ‘free market’ are absent within Hindutva neoliberalism in India. It does not completely break away from 19th century capitalism, but continues with its old foundations.

It provides a new but robust direction to 21st century capitalism in which the Indian state, the Bharatiya Janata Party (BJP) as a political party and the government of Prime Minister Narendra Modi work together in pursuit of corporate profit. The cultural nationalism of BJP and its ideological mothership, the Rashtriya Swayamsevak Sangh (RSS) is disingenuous. It marginalises the masses by spreading a false sense of nationalistic pride with the help of populist electoral democracy that is shaped by corporate media.

Hindutva neoliberalism helps break away from the ‘Washington consensus’, which advocates the framework of limited ‘capital-labour accord’ for the growth of capitalism. It helps in stripping away workers’ rights and other protective measures reformation of labour laws, as we saw before and during the ongoing COVID-19 pandemic.

There is absolute corporate consensus between obscurantist Hindutva politics and monopoly capitalism. The Hindutva forces make laws on agriculture, land, labour, water, mineral resources and environment to advance and insulate corporate forces from democratic discontents by declaring all forms of progressive political movements as ‘anti-national.’

Further, Hindutva neoliberalism facilitates capitalism in India by establishing political, social, religious and cultural dominance of the Brahminical caste order. Majoritarian social relations controlled by the established caste hierarchy helps neoliberalism to pursue its agendas without any form of political and social barriers.

The caste system not only normalises exploitation, but also naturalises all forms of inequalities in India. Such a feudal and authoritarian ideological framework established by caste and its cohesive order provides breathing space to both Hindutva and neoliberalism in India.

Hayekians, Keynesians, the Geneva school of policy-making, and the Chicago school of economists and policymakers were responsible in shaping neoliberalism as an ideological project of building a capitalist alternative to communism. These ideological adherents have naively believed and floated the idea that the liberal and welfare path can also defeat fascism and its other authoritarian variants by upholding ‘individual freedom and choice’ as sacrosanct.

These neoliberal ideologues have argued that the combination of individual liberties with desire-based capitalist markets can shape the future of democracy and prosperity in society. Such naïve philosophical formulations, economic myopia and political misunderstandings continue to expose themselves and their utopian outlook as global neoliberalism continues to assault democracies across the globe.

Global neoliberalism has formed alliances with the most illiberal forces in politics, culture and society today. Hindutva neoliberalism paves a new path for global neoliberal capitalism, wherein democracy, state and governments lose their public legitimacy in popular imagination. This is the best recipe to establish absolute control over the people, planet and resources without any form of political resistance.

Ethnic authoritarianism is an invaluable means for global neoliberal capitalism to survive and expand itself with the growth of ethno-majoritarian regimes like in India. The ethnic politics of Hindutva is not only sullying the unity of working people, but also diminishing citizenship rights by othering religious minorities (such as Muslims). Such processes weaken the conflicts between labour and capital.

The Karmic theory of reincarnation and salvation provides a philosophical foundation to Hindutva neoliberalism by shaping ideals and naturalising it in a way in which the individual blame their own Karma (destiny) for their miseries. Such processes of individualisation of ‘the self’ and demonisation of ‘the others’ help both Hindutva and neoliberalism in the pursuit of their political and economic projects in India.

The culture of neoliberal fragmentation and project of identity-based political mobilisation provide a coherent framework for Hindutva neoliberalism to establish itself as a formidable force in India. Both Hindutva and neoliberalism disciplines citizens and converts them into mere customers who are seeking satisfaction, utility and pleasure, as mere consumers of commodities.

The wholesale normalisation of the culture of consumerism under Hindutva neoliberalism dehumanises and dismantles societies, wherein unities and solidarities are becoming elusive. Therefore, even the beef-related lynchings, violence against women, children, Kashmiris, Dalits and tribals have failed to provoke a comprehensive mass struggle. This callous culture is an outcome of everyday Hindutva neoliberalism, which is practiced and promoted by the current government in India.

Hindutva neoliberalism marketizes every sphere of life in the name of Hindu cultural nationalism, at the cost of India and Indians. Prime Minister Modi and his party operate on market-led media mediation of public opinion as India’s ranking in the human development index continues to slide down.

The manipulation of the public psyche with majoritarian dominance and reactionary values led by Hindutva neoliberalism have failed to obscure the mass miseries and marginalisation in India. The struggles for citizenship rights, famers’ struggles against corporate control over agriculture, resistance movements against privatisation and liberalisation, struggle for justice led by women, students, Dalits, tribals and workers are the only way to reclaim India from Hindutva neoliberalism and its dehumanising values.

These resistance movements can only help in deepening constitutional democracy. The struggles are the only ways to repair a broken republic under the grip of Hindutva neoliberalism.