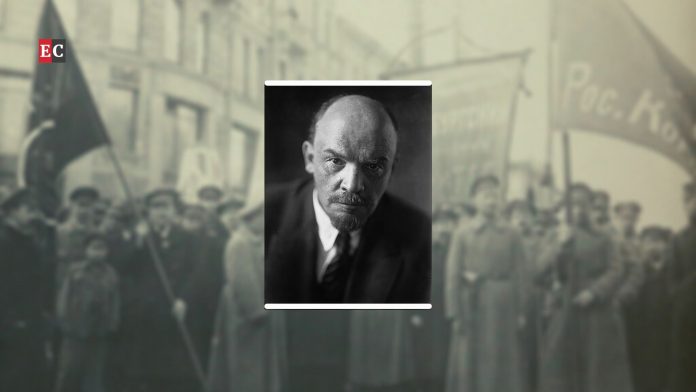 21 January 2021 was the 96th death anniversary of the great Marxist theorist and revolutionary, Vladimir Ilyich Ulyanov, popularly known through his alias Lenin.

Lenin and his most spectacular achievement, the great Bolshevik revolution, had a massive impact on international working class politics and anti-colonial struggles. The events of the ten days that shook the world in 1917, catapulted Lenin from merely one of the many Russians forced into exile by the Romanav dynasty into one of the most popular and influential global political figures.

During his lifetime, Lenin was subjected to vicious propaganda and vitriolic campaigns by the capitalists and ruling classes. Little has changed on this front even after 97 years of his death. In fact, the propaganda has only intensified as economic inequality and other forms of oppressions continues to grow.

Today, a vast majority of Indians, under the spell of nationalism, has succumbed to vicious propaganda surrounding Lenin, who was a great friend of India and advocated the complete independence of India from the British.

In 2018, immediately after the Narendra Modi-led Bharatiya Janata Party (BJP) came to power in Tripura, the first task undertaken by the Hindutva mob was razing down Lenin’s statue. In their defence, several BJP leaders as well as Hindutva supporters justified the action by calling Lenin a ‘foreigner’, ‘mass murderers’, ‘terrorists’ and what not, who had no place in India.

Hatred for Lenin is also shared by a section of the liberal intelligentsia. Last year, prominent public intellectual, Professor Apoorvanand, criticised Lenin in a The Indian Express op-ed. Ramachandra Guha, another public intellectual, endorsed Apoorvanand’s view on Lenin. In fact, Guha himself had penned an article for The Telegraph in 2018 criticizing Lenin.

Both professors who call themselves ‘Gandhians’, conveniently overlook the fact that Mahatma Gandhi himself admired the Bolshevik revolution and called Lenin a ‘master spirit.’ In an article in Young India published on 15 November 1928, Gandhi wrote:

“…there is no questioning the fact that the Bolshevik ideal has behind it the purest sacrifice of countless men and women who have given up their all for its sake; an ideal that is sanctified by sacrifices of such master spirits as Lenin cannot go in vain.”

As from centre to right, intellectuals and mobs criticize Lenin, a look at how his contemporary Indians saw him through a recollection of obituaries to Lenin after his death on 21 January 1924 is in order. These obituaries mostly appeared in nationalist newspapers and were written almost two years before the first communist conference on Indian soil.

“From this earth, the greatest man of our world had departed. It is a very painful experience to publish the news of Lenin’s demise. He was the man who by himself shook the world…He gave practical form, life, to the principle of equality. He demonstrated the world how happy can be the toilers’ social order and the leadership of the common working folk. In its selfish interest the capitalists were inimically hostile to him…but before the whole wide world he effectively proved the truth behind his revolutionary principles…All we can say is: May his principle triumph throughout the world, the creator give place to his soul in his own”

Another Hindi daily, Aaj, published from Varanasi, wrote in last week of January 1924:

“Humanity has suffered an irreparable loss by his death. May God give his followers strength to fulfill his mission of the emancipation of the world.”

“The noble minded Lenin, the friend of humanity, is dead. He was one of those noble-minded men who tried to find out the means of deliverance of humanity and entered the field of action at the risk of their lives…The history of the wonderful life and of the success of the noble minded Lenin has been painted in the black by his enemies and spread in the world in a perverted form. It is a heinous sin to paint as a blood-thirsty robber a person, at the moving of whose finger, hundreds and thousands of persons, oppressed by the heartless misrule of an autocratic monarch, have established a new empire of the unimpeded freedom of humanity”

Another popular Hindi daily, Deshbhakta, in the last week of January wrote:

“The death of Lenin means a serious loss not only to labourers of but also to all nations groaning under the burden of subjection. Lenin was the saviour of not only Europe but also of the whole world. Capitalists can have no peace even now, for although Lenin is no more on earth, he has planted his principles deep in the minds of people.”

The Hindi daily, Utsah, in a highly eulogistic obituary, wrote:

“Lenin’s policy was to serve his country and not become its master for his personal gratification. He was an enemy of despotism and territorial aggrandisement….The propaganda against Lenin in India is nothing but an attempt to take advantage of the ignorance of Indians and prevent them from breaking their chains… India also had a place in Lenin’s heart. Indians do not exactly know who are their real foes and friends. The truth, however, will be soon out…”

“Lenin stands before humanity a puzzle, a nightmare and a scare. Prejudice and passion twit our study. A relentless blockade screened him from outside view. Propaganda pictured him as eminently detestable. But half of Europe cannot be defeated from its map. One hundred eighty millions of Russian people bear testimony to hum and hold him on to history…He lives in the unrest of workers’ breast, and will shine in their triumph”

Another influential English daily, Bengalee, wrote on the same day:

“Lenin has passed away but the spirit of equality, which this Bolshevik leader has infused in the hearts of the general public, is today evident all over the world. In fact, none can say for certain that in the future every country will not have to accept Bolshevism”

The then popular Bengali Muslim paper, Soltan, wrote on 1 February:

“There are expressions of sympathy all the world over at the premature death of Lenin, who was a great enemy of monarchs, the aristocracy and capitalists and a great statesman and sincere well-wisher of humanity”.

A week later, on 8 February, the paper wrote again:

“Lenin’s heart was full of human qualities and the object of his life was to serve humanity. His enemies have described him as the captain of robber hordes. He was nothing of the kind. In fact he lived the life of a sincere sanyasi.”

The obituaries did not stop even after a year of Lenin’s death. The Hindi nationalist daily, Vartman, published from Kanpur, which had also urged common people to observe ‘Lenin week’ in memory of the leader in January 1924, published another article on his first death anniversary. It wrote:

“…it was he who broke the brutal authority of money and religion and laid the foundation of the destruction of those who on the strength of money were making the people of such a big world dance at their bidding. His gospel to the poor is being more honoured in the world than Vedas, the Quran or the bible. The working folk, the cultivators and the labourers regard him as their god. The sinful and the selfish fear him as much as murderers and dacoits fear a judge.”

For many Indians, Lenin was a friend, philosopher and guide in their own quest of liberation from the yoke of British imperialism and oppression.

The admiration for Lenin came not only from Socialist Indian revolutionaries, but also from nationalist leaders, like Balgangadhar Tilak and Lala Lajpat Rai, both of whom are held as icons by the Hindutva movement. Both Tilak and Rai admired Lenin and countered the vicious propaganda against him.

“When we read the attacks delivered by the hypocritical nations against the Bolsheviks, especially in columns of the Pioneer and the Civil and Military Gazette, it surprises us to find that there is no limit to the hypocrisy and lying indulged in by them. Some of our foolish Indian newspapers blindly support the hypocritical peoples in question”.

Similarly, Balgangadhar Tilak, in an editorial in Kesari on 29 January 1918, titled “The Russian Leader, Lenin”, wrote:

“We are publishing the main facts of Lenin’s life since mischievous propaganda is being carried on that the popular Russian leader has been bribed by the German government…. Lenin is an advocate of peace…”

The Indian contemporaries of Lenin were aware of the viscous propaganda hurled against Lenin and criticized it.

Perhaps contemporary Indians, the self-proclaimed nationalists, before falling to mindless and hate-filled propaganda and labelling Lenin a ‘terrorist’ or ‘mass murderer’ or rejecting him as a ‘foreigner’, should take out some time and flip through a few pages of real history, as against the WhatsApp-forwarded version of it.

is a PhD scholar in Sociology at the Jawaharlal Nehru University.