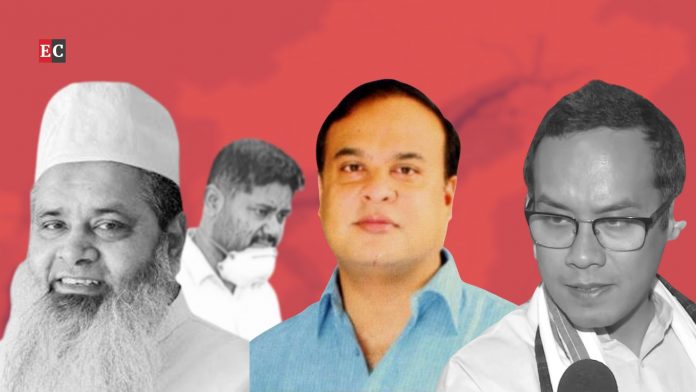 The recently-concluded Assam state assembly election, the result of which is due on 2 May, saw great drama and intrigue. This includes the Congress-led Mahajot’s (Grand Alliance) Tamulpur candidate, Rangja Basumatary, quitting Bodoland People’s Front (BPF) and joining the rival Bharatiya Janata Party (BJP) and an Electronic Voting Machine (EVM) ending up in a car owned by a BJP candidate’s wife.

But, the plot leading to the elections was equally exciting. It all began with massive protests against the Citizenship Amendment Act (CAA) in 2019, which gave birth to multiple political parties with the agenda to safeguard the language, culture and identity of the ‘sons of the soil’ (read: ‘indigenous’ people of Assam) against the allegedly ‘pro-Bangladeshi’ BJP government.

Then came the COVID-19-induced lockdowns that put the entire state on halt, except the government – or one man in the case of Assam led the show.

Defenders with a face and a narrative

Himanta Biswa Sarma, the incumbent BJP’s supremo in Assam and a senior cabinet minister in the state government, was all over the media, doing press conferences and executing strategies to control the pandemic.

In that moment, he was able to transform into a leader that the state needed during a crisis, a face to look for when things weren’t going right. Christened in popular media as ‘Mama’ (uncle), thanks to a whole bunch of viral social media videos, Sarma became somewhat of a people’s leader with a cult following.

The next stage was preparation and planning the elections. At that crucial moment, many new schemes were either announced or executed, like Pragyan Bharati or distribution of scooties among meritorious girl students, and certain populist and majoritarian decisions were taken, such as making Assamese a compulsory language till Class 10.

The anti-CAA movement was fueled by the student community, and so, schemes targeted at students have helped the party to neutralise, if not nullify, the effects of the movement. The opposition, on the other hand, had an aura of uncertainty surrounding this issue and it still has to some extent.

In this election, the coming together of Congress and All India United Democratic Front (AIUDF), along with other regional parties, to form the Mahajot was a positive sign, for it indicated a larger attempt to stop the Lotus (symbol of BJP) from blooming. But, on the way, few prominent blunders were made that aided the BJP in gaining the upper hand.

One of these was the fact that Lurinjyoti Gogoi’s Axom Jatiya Parishad (AJP) and Akhil Gogoi’s Raijor Dal (RD) couldn’t come together to form a coalition with the Congress-led Mahajot, further dividing the votes, whereas the BJP voter base remained intact. Himanta Biswa Sarma, in an interview, asserted:

“We had encouraged the formation of AJP and let our party workers attend their meetings so that they feel they have takers. Whether it is AJP or Raijor Dal or any other party, they have been floated according to the BJP’s strategy.”

Opposition without a face

During the entire campaigning, the opposition seemed to lack a credible political face to portray as their leader. BJP, on the other hand, had sitting Chief Minister, Sarbananda Sonowal, alongside their most popular minister, Sarma, to take the responsibility of the party on their shoulders.

There is no denial that in an ideal situation, the people should examine and vote based on the candidates standing in their constituency. But, in the real world, one cannot deny the power of a popular face. Prime Minister Narendra Modi has continuously done that for the BJP at national and to some degree, state levels, and this time, it looks like Assam found its face in Sarma who had been rallying all around the state. He became a powerful driving force for the BJP.

Though the Mahajot had the Gandhis and few popular faces campaigning for their candidates, none of them matched the popularity of PM Modi. This is partly due to the damage done to their images by BJP’s organised cyber trolls, and partly because of Congress’s own political decisions. In the state’s politics, they hardly projected anyone as a direct opponent to Sarma.

Although Ajit Bhuyan, a veteran journalist-turned-politician, helped the Mahajot, he lacked political experience to be the driving force of a rather dying party. In the case of AJP, Lurinjyoti Gogoi faced similar problems. He is very new to mainstream politics and lacks the political credibility to fight Sarma. The only one leader who could have made a difference was Akhil Gogoi, but he has been in jail for months now under charges of sedition and inciting violence during the anti-CAA movement.

BJP has been able to crush every dissenting voice through institutions and state apparatuses, moving the results in their favour whenever they needed to.The sudden silence of many vocal critics of the anti-CAA movement in this crucial time, the irrational political decisions made by some of the candidates, and the rise of one cult leader will be the factors that will help BJP to form government in Assam for the second time.

Moreover, the opposition, especially Congress, failed to bank on Gaurav Gogoi, Member of Parliament and son of veteran Congress leader and former three-time Chief Minister of Assam, Tarun Gogoi. They failed to link their campaign around the time-tested ideals of the senior Gogoi.

A cauldron of hatred

The void in the leadership of the opposition has allowed BJP to project AIUDF’s chief, Badruddin Ajmal, as the prime leader on the other side while building a communal narrative around him. Ajmal, for BJP, has become a symbol of the feared ‘outsider’ or ‘Miya’ (pejorative for Bengal-origin Muslims of Assam) with his appearance and history. His image would often be used as an acronym to that of Modi’s.

Modi has often portrayed himself as the preacher of Hindutva (often misunderstood as Hinduism by the masses), a saint doing his duty selflessly. His saffron image against the green image of Ajmal is just too perfect to be true for BJP.

Sarma, in an interview, has clearly dismissed Ajmal’s cultural lineage to Assam by saying:

“ I will not say Ajmal is an enemy of India. As an MP, he is certainly a citizen of India. But the issue here is not [one of legality]. The Assamese community doesn’t accept Ajmal as an Assamese, culturally. He can claim that he is Assamese, but the Assamese society will not accept such a claim. […] He is not a threat to India, but he and his community—a particular group of people—are threat to Assam’s culture and identity.”

That xenophobic emotion against a particular community, primarily Bengali-origin Muslims, is what the saffron party aims to capitalise on.

This can turn out to be masterstroke because of two reasons: one, it aligns with the BJP’s Islamophobic agenda and will make their core voters happy; and two, by bringing the linguistic aspect to it, it also coheres with the stance of the Assamese ethno-nationalists (who form the bulk of the opposition) and their position favouring the ongoing National Register of Citizens (NRC) updation exercise, which aims to identify “illegal Bangladeshis” in Assam.

By associating Ajmal to the proverbial “outsider”, BJP has tactically asserted that the Mahajot is pro-outsiders, a sentiment that will be repelled by many in the state. The ministers have continuously used Ajmal’s name in opposition to that of Modi’s, Sarma’s and Sonowal’s to draw on religious and cultural differences. By doing so, they are closing the ideological gap between itself and its rival parties, and blurring the lines of the CAA-NRC issue.

It also helps the BJP in another very important way. They have already established Congress as a corrupt, dynastic party across India. The Sonowal-led BJP government in Assam has, in the past five years, taken strict action against corruption and established their stance as clearly as possible. Therefore, if there is no difference between the two parties, people are most likely to choose the seemingly less corrupt one, which in this case is the BJP.

There is no other party that has any real ability to dethrone the BJP. AJP might suffer because of what BJP’s ally, Asom Gana Parishad (AGP) did as both have very similar inception points, and also their own inexperience. RD, on the other hand, will miss their leader Akhil Gogoi. So, if BJP can make Mahajot-led by Congress fall, they will conquer Assam for the second time, and become the first non-Congress political entity to do so.