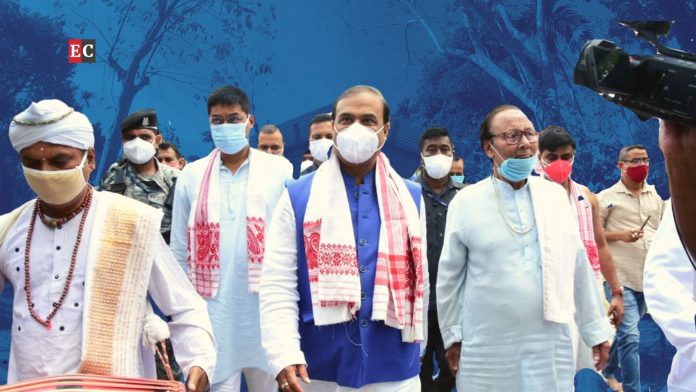 With rapidly COVID-19 cases in Assam, the Bharatiya Janata Party (BJP)-led state government issued a modified Standard Operating Procedure (SOP) on 13 May, outlining a stricter set of safety protocols for people to follow.

According to the new rules, not more than ten people can assemble in religious places or in any ceremonial events, that too only with social distancing. However, on the same day, the newly-elected Chief Minister of the state (and Health Minister in the previous BJP government), Dr Himanta Biswa Sarma, raised many eyebrows as he paid a visit to the renowned Majuli Island.

The visit had a stated objective of understanding the COVID-19 situation in Majuli. However, as visuals from the ground later showed, a significant part of it was spent in the notable religious sites of the island, which is known for its Satras (Vaishnava monasteries). These tours were followed by a not-so-intimate lunch with a group of people with little social distancing.

This event gives rise to two big questions – one about enforcement of COVID-19 protocols, and the other about the significance of the Chief Minister’s visit to certain religious sites where he conducted himself both as a tourist and a devotee.

Last month, it was reported that the Prime Minister of Norway, Erna Solberg, was fined Rs 1.75 lakh by the police for breaking COVID-19 protocol during her 60th birthday celebrations. Her government had allowed a maximum of ten people to gather for events, and she herself was caught inviting thirteen. The law took its natural course and Solberg faced action.

On the other hand, one wonders how seriously would the authorities in Assam take the clear violation of the new SOP by the state’s Chief Minister during his Majuli tour, and whether the rules were only for the common people.

The partial lockdown in Assam is leaving a devastating effect on the economic well-being of ordinary people, of which the poor are the worst victims. In such a scenario, can one hold those in power accountable for violating the official government order? With the rising numbers of active positive cases and deaths, how do citizens rely on a government that itself shows no consistency between its directives and actions?

To answer the second big question, one has to look back into Assam’s history. Within Assam, the Majuli Island, with its numerous Vaishnava monasteries, occupies a sacred space. Historically, these Satras have always been under the patronage of the ruling class.

The Ahom kings in medieval Assam contributed immensely in the upkeep of these monasteries by gifting them land and other assets, and most importantly, protecting their ritual power. The British left them undisturbed and in independent India, these religious sites rather became important tourist destinations due to the faith, art and culture that grew in them. Therefore, the sacred and the secular remained merged in this riverine island for centuries.

During the 2014 Lok Sabha election campaign in Assam, a growing emphasis was witnessed on the Satras of Assam, particularly the powerful ones of Majuli, in the speeches and rallies of different national as well as regional political leaders.

Within the broader umbrella of the BJP’s Hindutva programme, there was an unusual focus on praising and appropriating the founder of the Vaishnava faith in Assam, Srimanta Sankardev, as a mainstream Hindu figure. This effort remained intact and reflected in many further political engagements of the party. Even in the recently-concluded, high-voltage state assembly election, the BJP promised to sanction new funding for the Satras and protect them from ‘illegal encroachment’.

Powerful religious institutions have become an indispensible source of strength for political parties and figures to gain and maintain power. Therefore, there is little room for guesswork that the Chief Minister’s 13 May visit to the Satras in Majuli leaves.

We currently live in a world where a pandemic controls everything around us. Fear of death has become the guiding principle. A taxing and chaotic new normal has arrived. Healthcare systems across the globe are working relentlessly and often, failing to keep the ailing alive.

In such a dire situation, citizens helplessly look up to their leaders they have democratically voted to power. But, the questions remain – are these people’s representatives leading people in the right direction? In how many ways do their negligence impact the psyche of the general public?

Is it anymore possible to hold the powerful and the privileged accountable for their negligence that can have a catastrophic effect on the trajectory of the pandemic?

Featured image: Chief Minister of Assam, Dr Himanta Biswa Sarma, during his visit to Majuli on 13 May 2021 | Taken from Twitter profile of Sarma.

is a Doctoral Fellow at the Centre for the Study of Social Systems, Jawaharlal Nehru University, New Delhi. Her primary area of research is the sociology of religion and caste, while her doctoral research focuses on ritual hierarchy, authority structure and everyday social relations within the Neo-Vaishnavite religious order in Assam.