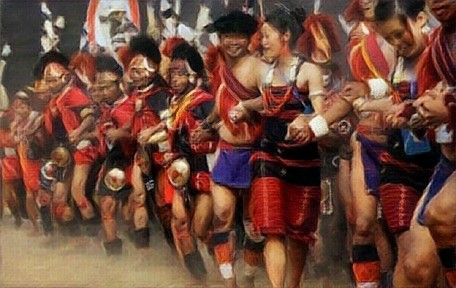 Northeast India, ever since independence, continues to be a region witnessing perpetual political and ethnic violence. It was one of the regions where the very ‘idea of India’ as a sovereign state was first challenged.

Owing to its immense diversity in terms of race, ethnicity, language, culture, religion and geography, the Northeast proves to be a very complex region.

In the words of Sanjoy Hazarika, a noted scholar from the region:

“There are many truths here, conflicting realities, especially in terms of perceptions. Indeed, it is these differing perceptions that lie at the root of most conflicts in the region, between India and its perceived Northeast as well as within the Northeast itself.”

The complexity of the region lies in the fact that it is home to more than 300 ethnic communities, each having its own conception of history and territorial claims. As a result, the interests of one community, more often than not, overlap with that of the other. This has resulted in a perpetual bloodbath.

“The conflict paradigm in Northeast is a mix of various types of conflicts, and the most violent ones aren’t just inter-community clashes,” says Angshuman Choudhury, researcher at the Institute of Peace and Conflict Studies, New Delhi, who also hails from Assam.

He adds, “The competing territorial claims are often juxtaposed against a general rejection of the Indian State and the desire for political sovereignty/autonomy. This political ambition often supersedes latent inter-community tensions. Also, on many occasions, different communities/groups have collaborated to fight the Indian State. The recent formation of a ‘Unified Command’ in Eastern Nagaland/West Myanmar is a point in case.”

Added to this, is the fact that the Northeast shares 98% of its boundary with other countries – China/Tibet in the north, Bhutan in the north-west, Myanmar in the east and south, and Bangladesh in south-west. Furthermore, the region is connected with India through a 22-km-wide corridor—the Chicken Neck Corridor—sandwiched between Nepal and Bangladesh at Siliguri in West Bengal.

This long international border is highly porous and poorly manned. As a result, it paves way for unabated infiltration (largely from Bangladesh), provides an easy escape route to terrorists/militants and facilitates illicit drug trafficking, to and from, Southeast Asia.

According to the South Asia Terrorism Portal, since 1992, about 2,727 defence personnel, 8,418 insurgents and around 10,216 civilians have been killed in the Northeast. The Controls Arms Foundation (CAF) — an organisation working with women from insurgency-affected areas of Northeast India — estimates that in the state of Manipur alone, there are reportedly around 20,000 registered widows due to conflict related violence.

This article basically attempts to find out the broad themes on the basis of which we can categorise the ongoing violence in Northeast India. It attempts to find the common grounds (if any) between different ‘insurgent’ movements in the region. This approach is expected to help a lay reader in understanding the problems in simpler terms.

The fear of losing control over land and natural resources is observably a common element in all insurgent movements or ethnic clashes in Northeast India. Whether it is the problems in Bodoland, Tripura, Meghalaya, North Cahachar Hills, Karbi Anglong, the plight of the Chakma refugees or the hill districts of Manipur inhabited by, among others, the Kukis and Thangkhul Nagas, this apprehension runs deep in the psyche.

The fear of losing control over land and natural resources is observably a common element in all insurgent movements or ethnic clashes in Northeast India.

This fear, in turn, emanates from the possibility of the ‘other’ community stretching its arms and engulfing a part of the land (and the natural resources) that the natives claim to have inherited down the generations. This element of suspicion becomes the breeding ground for potential violence — fueled by hatred, indoctrination and political opportunism. If the conceived ‘other’ community is an outsider, such as immigrants and inter-state migrants, the animosity only boils up further.

In this background, if we carefully analyse the nature of violence in the Northeast, we can find that almost all of them can be divided into two categories on the basis of their root causes — (a) trans-national migration: the native versus outsider problem, and (b) The issue of Nagalim.

Over the years, these two have been the source from which many different conflicts have originated.

Ethnic violence and insurgency in large parts of Northeast India is centred primarily on the issue of infiltration and ‘unwanted’ migration of ‘outsiders’ to the region. The infiltrators largely constitute of the Bengali-speaking Muslims from Bangladesh. Whereas the ‘unwanted’ migrants generally comprise of the economic migrant laborers, largely from Nepal and Bihar, who come to Northeast every year in large numbers.

Apart from these, the “outsiders” also include various indigenous communities/tribes which have undergone intra-state migrations at various phases of history. These are also known as the ‘Internally Displaced People’. The reason for their displacement varies from conflict, tribal animosity, riverbank erosion, floods, developmental projects, to better opportunities and the like.

This unrestrained and unaccounted influx, the natives fear, is converting the ‘sons of the soil’ into a minority in their own homeland

In Assam, Tripura and parts of Meghalaya, the tension is largely due to the highly porous international border with Bangladesh. Over the years, the unabated flow of illegal immigrants who come in search of greener pastures in India has resulted in catastrophically changing the demographic profile of Northeast India.

This unrestrained and unaccounted influx, the natives fear, is converting the ‘sons of the soil’ into a minority in their own homeland. There is an apprehension that if the present trend continues unabated, the ‘outsiders’ will rise to such a number that one day the native culture and their distinct identity in itself will be engulfed by the ‘outsiders’. It is this clash between the ‘natives’ and the ‘outsiders’ that has over the years escalated into violence in various parts of Northeast India.

Nagalim: The Dream Territory Of The Nagas

After migration, the second major cause of violence in the Northeast is the failure over the Naga talks between the insurgents and the Government of India (GOI). The roots of conflicts prevalent in Nagaland and Manipur, along with some parts of Assam and Arunachal Pradesh, in some form or the other, can be traced to this.

Broadly speaking, the insurgent groups NSCN (IM) and (K), who claim to represent the Nagas, demand that a territory called Nagalim— which would include the present state of Nagaland, along with roughly four districts of Manipur and parts of Assam and Arunachal Pradesh where Nagas inhabit— should be carved out to address the Naga issue. Not only this, the proposed region of Nagalim also includes a significant part of Myanmar too, thus making it an international issue.

Not surprisingly, these demands have triggered strong opposition in Manipur, Assam and Arunachal Pradesh. Particularly in the case of Manipur, several opposing insurgent groups have been formed to protect what they call ‘the interest of the people of Manipur’.

In the words of Sanjoy Hazarika,

The complexity of the Naga situation – sixteen tribes in the state of Nagaland alone and another dozen or more in the neighbouring state of Manipur – has meant that despite two decades of negotiations between teams from the Indian government and the principal Naga organisation, the National Socialist Council of Nagalim (NSCN), the two sides remain locked in discussions, which are signals both of hope and despair.

Apart from the failure of talks, the issue of Nagalim has also been further complicated by the factionalism between different Naga leaders. For a long time NSCN was the sole representative voice of the Naga people but the group is now divided into factions such as— NSCN (Isak-Muivah), NSCN (Khaplang), NSCN(Reformation), NSCN (Unification) etc.

Until March 2015, all of them were in ceasefire agreement with GOI, but they had no such agreement amongst themselves. This often resulted in clashes between the supporters of these groups on regular basis. According to an op-ed article in The Hindu, by R.N. Ravi— a retired Special Director of Intelligence Bureau in Government of India— “over 1,800 Nagas have been killed in some 3,000 fratricidal clashes since the beginning of the ‘ceasefire’ (1997-2013)”.

At present, the NSCN (K) has moved out of the ceasefire with GOI and is engaged in armed confrontation with Indian security forces for the last two years. In May 2015, the group killed eight soldiers of the Assam Rifles in Mon district of Nagaland, and in June launched the biggest attack on the Indian Army in recent times, killing 18 soldiers in Manipur’s Chandel district.

The government, on the other hand, has officially sidelined the group from talks. Prime Minister Narendra Modi in August 2015 announced the signing of a “historic” Naga peace accord. However, the details of it are yet unknown. Even the chief ministers of Nagaland, Manipur and Arunachal Pradesh, were reportedly clueless about it.

Now, with the death of SS Khaplang (founder and undisputed leader of NSCN (K)) and also of Isak Chishi Swu, chairman of NSCN (IM), it is yet not very clear what path these group will tread hereafter.

Wither Is The Road Ahead?

Due to the inherent complexity in the above mentioned two causes, an easy solution does not appear in the near future. The last state assembly elections in Assam, where the Bharaitya Janata Party (NJP) won for the first time,  were fought primarily on the issue of infiltration from Bangladesh.

The Prime Minister, on several occasions, has reiterated his promise to deport the infiltrators. However, in the last three years, there has been nothing that suggests that his government has any concrete plan to fulfill the promise. After winning a historic election in Assam, it will be a humungous task for his party to first identify who is an illegal immigrant and then convince Bangladesh that it should accept the identified people.

70 years of independence is a testimony to the fact that any meaningful solution for the region cannot be arrived at in isolation.

Similarly, even though the government claims to be working on a landmark solution for the Naga talks, the fact that one of the major factions of the NSCN, NSCN(K), is not in the equation raise serious doubts over its success. Furthermore, the Chief Ministers of Manipur, Assam and Arunachal Pradesh have made it clear that their respective state will not cede its territory at any cost.

71 years of independence is a testimony to the fact that any meaningful solution for the region cannot be arrived at in isolation. A solution that emanates from the region is more likely to be worked upon than one that comes from New Delhi. This is primarily because New Delhi is perceived (or made to be perceived) as a ‘dominating’ and ‘intruding force’ in the Northeast. Therefore, whatever solution it advocates has the potential of being interpreted as its attempt to ‘dictate terms’ on the region and homogenise it with the so-called ‘mainstream India’.

There is an immediate need to create platforms where members from different communities in the Northeast can come together and deliberate. The problems of the region can be amicably solved, but for it happen, the first requirement is the political will to do so.

The quest for this political will is perhaps the biggest hurdle.

This article has been curated from the author’s own blog, Nomadness. Read the original version here.

Mukesh Rawat is a journalist based in New Delhi, India.