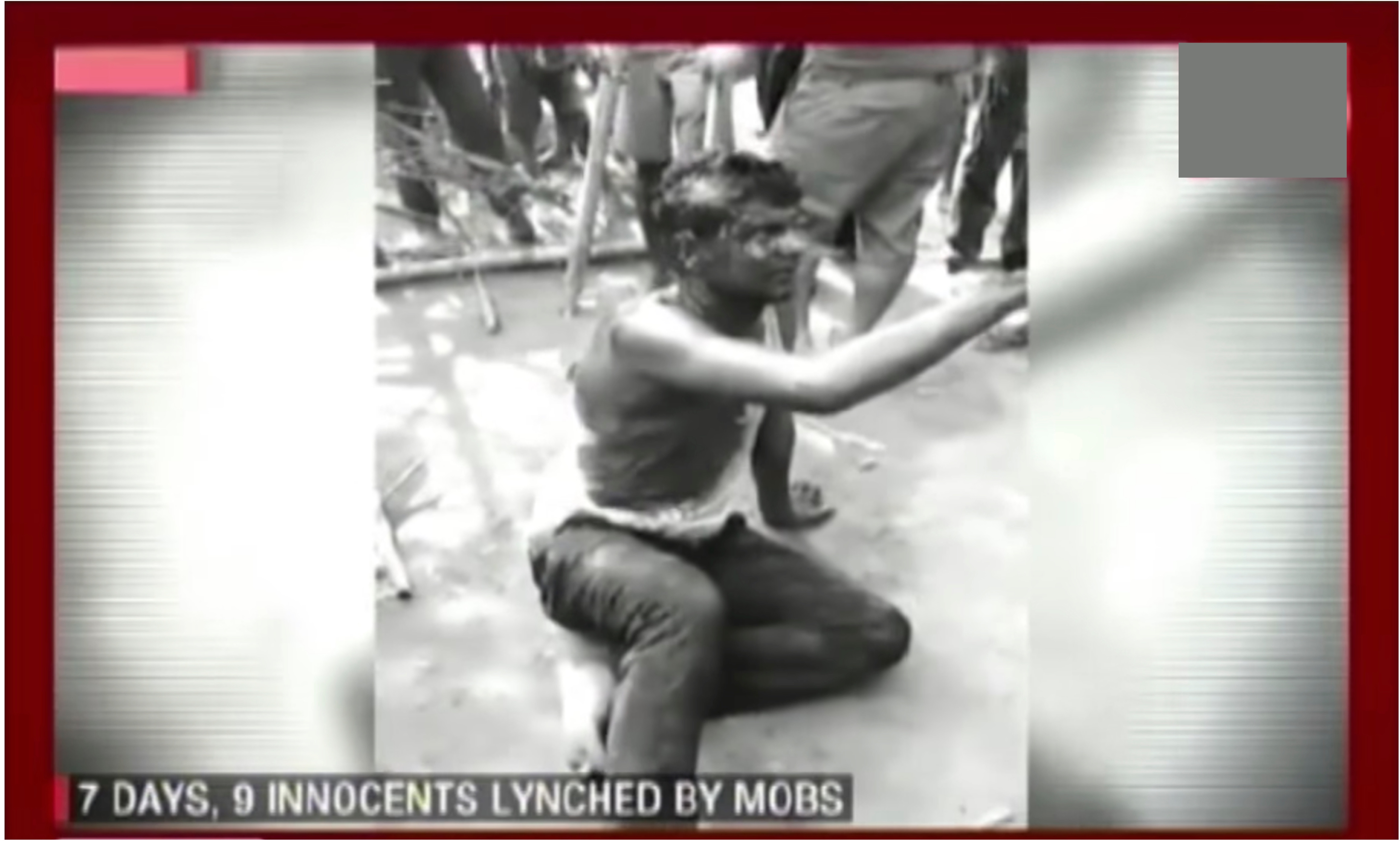 After the recent incidents of lynching in some parts of the country, there has been a debate whether such incidents have increased during the BJP rule. But, there is not adequate data to conclude. India needs serious reforms in Crime Reporting as the Supreme Court recommends a separate offence for lynching.

A series of mob lynching incidents have been reported in the media since December 2015. Even as politicians from opposing parties accuse each other of instigating communal violence, media and research organizations are reporting trends of spiked communal violence based on incidents reported in the press. It is concerning that newspaper reports are being considered as a yardstick to measure the increase or decrease of violence because it is common knowledge that media coverage is disproportionate and varies depending on the region of incidence, language of the platform used like print, broadcast and the market dynamics of the media houses.

Even as the government is pushing for a ‘Digital India’, the low priority and significance given to appropriate data and methods to collect it makes the entire exercise less credible and pointless. But the reality is that media reports in India are only form of data available to understand and analyse hate or lynching incidents. The government of India does not have any quantifiable data in this regard even as the Supreme Court recommended the Parliament to create a separate offence for lynching and provide adequate punishment.

There are two databases that are consolidated by two different agencies in the government that are used to understand crime data with respect to communal incidents in India. One is the Ministry of Home Affairs database (MHA) and the other is the National Crime Record Bureau (NCRB), a wing within the MHA that maintains its own database about crimes, criminals and law enforcement nationally.

MHA collects its communal incidents data from the states. Every year, the NCRB also collects data from the State Crime Records Bureau of the State Government and compiles it into a Crime in India Report. The data is collected with the help of a standard template. The report has detailed information on various types of crimes. The Bureau follows the ‘Principle Offence Rule’ for counting crime. Hence, among many registered offences in a single case, only the most heinous crime is considered as a counting unit in its data.

For example, in the case of Mohammad Akhlaq being lynched by a mob in December, 2015 – the FIR states that all the accused have been booked under the following sections of the Indian Penal Code (IPC).

Whether the state government has some system to report the above as a communal incident is not known. Hence the MHA data might or might not have included this crime. In the case of NCRB, only section 302 – Murder would be counted for data collection because it follows a principle offence rule by considering only the most heinous crime. Important details that give context and help define the nature of crime like rioting with deadly weapon and unlawful assembly of people in large numbers to kill will be automatically eliminated and will not be part of the data. Same would be the case of lynching of a Police Officer in Jammu & Kashmir.

Since the premise of both the databases is not uniform and very different, every year, there is a difference in number of crimes that the MHA and the NCRB report. The figures for communal incidents in the past three years are indicated below will help understand it better. It is not just the difference in numbers at a national level, there is no uniform pattern in the number of incidents in different states as well.

Categorisation of Crime – Need for a ‘Hate Crime/Lynching’ category

Certain sections of the Indian law and penal code do address the aspect of hate but do so in an isolated manner. The Prevention of Atrocities Act, which protects the members from Scheduled Castes and Scheduled Tribes (SC/ST) from hate offences, harassments, humiliation and indignities, is one such law. In the same way, sections of the Indian Penal Code (IPC) 295-298 deal with crime and punishment regarding places of worship, religious belief, religious assembly and intent to hurt religious feelings. IPC Sections 153A & 153B also deal with offences that promote enmity between different groups on the grounds of religion, race etc.

While Mohammad Akhlaq’s lynching was widely reported in the media as a hate incident with religious sentiments – on an unverified claim that he was carrying beef, the FIR has no such mention of sections related to the same. So, in all likelihood it will be counted as just another murder and not a religious hate incident. And this is exactly why we do not have any accurate data to measure particular categories like communal incidents or other hate incidents or incidents of mob violence/lynching.

Countries like the  United States of America (USA) and the United Kingdom (UK), have adopted a ‘Hate Crime’ category into their crime reporting.  The US Bureau of Justice defines hate crimes as “crimes that manifest evidence of prejudice based on race, gender or gender identity, religion, disability, sexual orientation, or ethnicity.” This allows collection of data and gives an accurate picture about violence and crime, which is prejudiced on perceived identity like religion, race, gender etc.

The Introduction of a ‘Hate Crime/Lynching’ category in India will help represent the extent and frequency of prejudiced hate incidents accurately. It will also make it easier for the law enforcement agencies like the police to primarily categorise it first as a hate incident and additionally add other sections based on the outcome of the crime. The current system eliminates the context and records only the outcome in many cases.

According to current law, information relating to an offence has to be given orally to an officer in charge at the police station, who shall put it in writing as a First Information Report (FIR) and register a case if he deems fit. In some cases, a police officer has right to conduct a preliminary enquiry before registering a case. It has been reported that this system is largely abused and manipulated to avoid registering cases and intimidate and harass victims who want to set the criminal law in motion. Some officers might not be inclined to register the case because they might not see any personal benefit – monetary or otherwise. In certain instances, the police stations might be over burdened with existing investigations and feel that the case might not come to closure. As a result, crimes tend be under reported and not investigated at all.

More reliable and effective tools to make this process of registering cases mandatory, making provisions to immediately report any rejection of registration to authorities online will make the officers in charge more accountable and binding. “A comprehensive central reporting system that prevents officers from back dating an FIR in an attempt to steer the case away from its normal course but allowing the same in unavoidable circumstances, where the onus should rest with the officer registering the case should be put in place. This will streamline the process in some way,” says Sushant Reddy Ramayyagari, an advocate at the High Court of Judicature at Hyderabad.

One of the biggest problems in the ground operations of law enforcement agencies is the widespread corruption and an existing system that limits itself to making the agency less transparent for citizen participation. Even though, law and order is a state subject, there is a need to have uniform crime reporting guidelines across the states and clear categorisation to link incidents into crime categories. Currently, the data is recorded by the states and then reported to the Central government – Ministry of Home Affairs (MHA.) The National Crime Records Bureau (NCRB) collects data from the State Crime Records Bureau, which is again a state government agency. Investigations and analysis by Factly in the past has exposed large discrepancies in data that the state governments possess and data that is shared with the centre. Data is being under reported at the central level. Creating centralised online data systems that register and store data at the state level but automatically accessible at the centre might be an efficient way to reform the existing system. This will reduce time and eliminate discrepancies. The Crime and Criminal Tracking Network & Systems (CCTNS) may be a step in that direction.

Due to the existence of two databases and difference in data collection methods, it is very difficult to conclude on the basis of either of them. The IPC sections in an FIR and the inadequate categorisation in the existing databases to represent the actual context of the crime makes the data invalid. The lack of uniform crime reporting guidelines that law enforcement agencies and crime reporting agencies share also makes it very difficult to collate data and draw points of similarity. The existing categorisation of crimes is very basic and deficient in representing the context, intent and prejudice in crimes that can be categorised as hate incidents. Unless an overarching reform in crime reporting is undertaken in the country, we will have no data to analyse crime and violence or invest in capacities and strategies to prevent the same in the future. This is precisely what the Supreme Court has recommended the parliament to do, a separate offence for lynching which includes hate crimes.

This report was originally produced and published by Factly and has been republished here under a CC BY 4.0 license. Read the original copy here.

Tejeswi Pratima Dodda is a communications professional. She is passionate about social justice, gender mainstreaming and conflict.