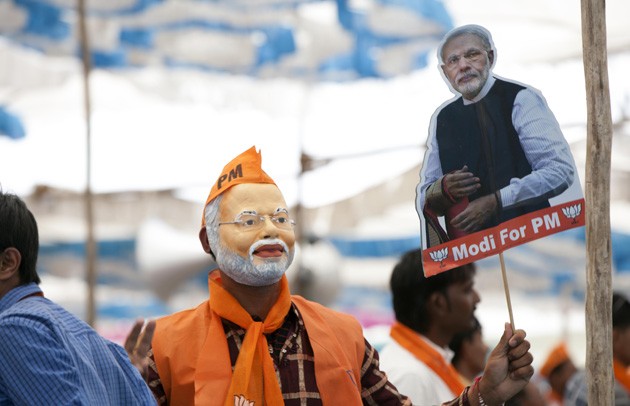 Narendra Modi, represents the contradictory character of Hindutva politics. He was elected with majority votes on the promise of good days (acche din), but has only upheld the exclusive interests of the capitalist classes after forming the government.

These contradictions are integral to the fascist politics of Hindutva in India. The political history of so-called Hindu nationalism is neither consistency nor chaos. But it is a methodological contradiction in shaping the power of national and international capital in India with the help of state power.

The people of India have been beguiled by the claim of Modi’s consistent false propaganda that the country under his leadership is moving towards the resolution of all problems. The groundless optimism did not take much time to reveal hopelessness in the republic.

All his promises and claims have been discredited by tragic realities of everyday life. All reasons and sensibilities have been assaulted by aggressive nationalism of false patriots. The agendas of people were put into the dustbin of politics by regular headline-grabbing cow vigilantes, terrorism, love jihad, cultural and moral policing of our young generation.

The despairs have been reduced to the result of past failures of previous governments and it is impossible for the current government to reverse the situation. This symbolises naive hope of people and the meaninglessness of despair lies within the structure of the Modi government, where corporates flourish and people face the death cult of hunger, joblessness, cultural police and their test of patriotism before journeying to burial grounds.

A non-response to COVID-19

The government’s COVID-19 strategy is, in fact, contributing to the deaths and destitution of the poor and marginalised migrant workers. It strips away the dignity of human lives in India. It is a Modi-made and Modi-led public health disaster in making. But the showman’s unfettered popularity, false promises, and deceptive propaganda continue to rise.

The directionless policy decisions of the government, explosion of misinformation, combined with Hindutva hangover with pseudo-science, creates challenges for India in its resolve against the pandemic. They undermine India’s credibility and international image.

Only a secular and multicultural democratic dividend can help shape India and the future of Indians during the crisis. The future of India depends on its people, irrespective of their religious, regional, cultural and social backgrounds. Empowering people and enlarging the democratic space is central to transforming India into a successful welfare state. Food security, public health, education, and sustainable development are some of the central issues Indians face today.

It is within this context that India needs planned interventions by mobilising its internal resources. India lacks infrastructure to mobilise its natural and human resources. So, it is imperative for the policymakers to create sustainable infrastructure with a long-term vision that can generate mass employment and other sources of income for the people, even during the pandemics. Success depends on sustainable leadership that empowers people with clear flow of progressive and scientific information. Therefore, digital revolution can be used as a tool to realise this goal.

All of these are missing in the Modi government’s policy framework, which seems to be following a very narrow reactionary vision of the Rashtriya Swayamsevak Sangh (RSS). The communal ecosystem nurtured by the regime, including the media, did not miss any opportunity to blame the religious minorities for the spread of the COVID-19. Death toll grows due to COVID-19 and the Prime Minister’s popularity grows due to propaganda.

The Modi-led Government of India is creating massive tax regimes for the masses but gives huge tax relief to the corporations. The neoliberal economists in Modi government have failed to understand the objectives of taxation as a concept and an economic tool.

Taxes are used to increase public investment to increase productive infrastructure for economic growth and development. They are used to augment social welfare of the masses by controlling market mechanisms. They help create economic stability by reducing inequalities and inflationary pressures within an economic system. The Modi government has failed to achieve the basic objectives of taxation. The corporates are the prime beneficiaries of taxation policies of the government. It is economic illiteracy that defines this government, which puts masses in miseries.

The Modi government also did not provide any form of relief to the masses. It surrendered to the Indian industrial capitalist class by withdrawing the policy of mandatory wage pay during the lockdown period. While the Modi-led central government surrendered before the Chamber of Indian Industries (CII), the Bharatiya Janata Party (BJP)-led state governments in Uttar Pradesh, Madhya Pradesh and Assam have abolished important legal protection for the workers. In this way, the Modi government has enabled conditions of bonded labour.

The postcolonial Indian state, as a political entity, is a product of anti-colonial struggles of the working class. But the state in India today is taken over by the upper caste and class segments. It serves the purposes of industrial capitalist classes and feudal landed elites. It does not represent the Indian working classes any longer. It is clear that Modi represents the political rule of the capitalist class, where the masses cannot decide the future of democracy with the perpetuation of misery.

Also read ‘COVID-19 in India: How the Middle Class is De-Politicising the Public Sphere‘

It is the farmers, youths, migrants, labourers, women, Dalits and tribals, who produce everything but suffer from misery in the midst of plenty. They produce food, but die in hunger. The migrants build the cities, malls, hotels, but live without a roof over their head. They build hospitals, but die of illnesses without basic medical facilities. The lockdown period is a time for self-reflection and realisation for the working classes, that they need to work for their own emancipation from the bondages of work within a system that does not give opportunities for a dignified life.

The Hindutva regime led by Modi is losing control over the very objectives that it had promised to the people of India. It promised strong leadership, economic prosperity and national security. But the government has failed to achieve these three important promises. It is using the COVID-19-led lockdown to control the masses by putting student leaders, human rights activists and opposition leaders in prison.

It is destroying Indian democracy by controlling the masses under the pretext of stopping the spread of the virus. In reality, the directionless lockdown has failed to achieve the objectives. The Modi regime began to turn against the people of India, accusing the non-existent opposition parties for the failure of the government. It ruined constitutionally-approved, well established norms and institutions of policy and governance, as a result of which people are facing a uncertain futures. The country is also facing a troubled neighbourhood.

The mass appeal of Modi and corporate character of his government reflect contradictory characters of Hindutva forces in India. It expresses itself in the way in which it seeks to achieve its reactionary objectives at the cost of the Indian republic. The contradictions are ways to hide the real objectives of Hindutva politics that is incompatible with modern India and its people.

The propaganda has failed to hide the contradictions and ideological elusiveness of BJP and RSS. The people of India are frustrated and the government has betrayed their hopes and aspirations. The impoverished migrants, students, youths, farmers, women, rural and urban poor witness the paradox of plenty and so-called strongman Modi – the prophet who failed them.

In such a context, Indian democracy is heading towards a street level chaos. The chaos needs political direction and leadership to convert itself into a revolution that can shake up the Modi regime and its medieval ideological apparatus led by the RSS. The failure of the government reflects the ideological bankruptcy and irrelevance of the RSS and BJP.

The alternative political forces cannot be repressed forever. It is time to struggle together to save the idea of India from the ruinous path led by BJP and RSS. India can only revive its progressive and democratic path by mobilising its own resources with the help of its own people. It needs change of political leadership, direction and ideological revamp to ensure its multicultural ethos.

Only the establishment of social harmony, devolution of power to people and economic decentralisation can guide India towards a path of economic growth and development. It is important to realise that peace and prosperity move together.

Featured image: A Narendra Modi supporter wearing his mask at a rally in Gujarat, 2014 | Wikimedia Commons