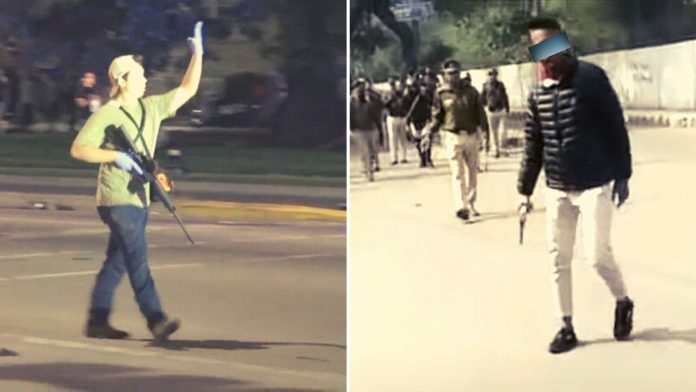 On Tuesday night, a teenager killed two people and wounded a third in Kenosha, Wisconsin, during protests against the near-fatal shooting of 29-year old African-American man, Jacob Blake, by a local police officer on Sunday.

The suspect was later identified as 17-year old Kyle Rittenhouse from Antioch, a village that lies just southwest of Kenosha in the neighbouring state of Illinois, right next to the interstate border. Rittenhouse, first identified by social media users from photographs and video footage, was later charged with homicide in Kenosha.

The Antioch Police Department told The Independent that the teenager “voluntarily surrendered” on Wednesday morning after an arrest warrant was filed.

Multiple Twitter users posted video footage from Kenosha that showed Rittenhouse strutting down the city streets, holding an AR-15 assault rifle, like its nobody’s business. That too as the police looked on.

Another footage from the scene showed local police officers offering him a water bottle and even thanking him for his ‘help.’

He even identifies himself by name in one video.

While the exact antecedents of the 17-year old killer remain unknown, social media users did some digging and discovered that he is a big admirer of the police, a passionate ‘Blue Lives Matter’ (an American right-wing movement in support of cops) loudhailer, and “affiliated to the police” in some manner.

According to a Buzzfeed News report, Rittenhouse was seen occupying a front-row seat at a Donald Trump rally in Des Moines, Iowa, in January.

Now, seven months ago, something very similar happened in New Delhi – a 19-year old man, who was also reported to be a minor, opened fire at anti-Citizenship Amendment Act (CAA) protestors near the Jamia Milia Islamia university. He did so while Delhi Police personnel looked on, as photographs from the scene unambiguously show.

Some reports claimed that the shooter had identified himself as ‘Rambhakt Gopal’, which is also believed to be the name of his Facebook account.

But Delhi Police ‘sources’ later told the media that his name was Ram Bhagat Gopal Sharma, a resident of Jewar in Uttar Pradesh’s Gautam Buddh Nagar district. He was later arrested and sent to a juvenile correction home on a 28-day protective custody.

According to NDTV, the shooter waved his gun for a full two minutes before firing, while the police simply gawked at him from behind. Fortunately, while no one was killed during the incident, one Jamia student sustained minor injuries and was treated at the hospital.

After the shooting, social media users, like in Kenosha’s case, did some burrowing and found that the shooter was affiliated to the right-wing Hindutva organisation, Bajrang Dal, which is linked to the Rashtriya Swayamsevak Sangh (RSS), the ideological mothership of the ruling Bharatiya Janata Party (BJP).

Srivatsa, national campaign in-charge for the Congress party, divulged photos of the shooter with right-wing social media influencer, Deepak Sharma, who was earlier photographed with a top union minister in the BJP government. Not very different from Rittenhouse’s proximity to Trump supporters.

Not unlike in the case of the Kenosha shooter, the ideological-political affiliations of the Jamia shooter were plastered all over his social media profile where he posted incendiary and often, openly violent, stuff about anti-CAA protestors, Muslims and Shaheen Bagh (a neighbourhood in East Delhi that hosted a women-led protest for nearly three months). He also shouted threatening slogans right before opening fire at protestors.

The Jamia and Kenosha shooting incidents have at least four things in common.

First, in both instances, the police sided with an armed vigilante. In Kenosha, the police, to their misfortune, were taped thanking the shooter. In the Jamia case, such platitudes were almost implicit in the police’s outright and protracted inaction against a man who was a clear threat to public order.

The two cases indicate the ideologisation or politicisation of state forces under right-wing ethno-majoritarian regimes. Both incidents took place in a deeply divided context, in which a certain majority group stands pitted against a minority (African-Americans in the US, Muslims in India).

Second, both acts were preceded by specific calls to violence by top leaders in the ruling government. In the US, it was the President himself who, back in May during the George Floyd protests, tweeted the following:

The subtext and essence of this freakish refrain isn’t lost on anyone. Trump was bluntly admitting that using gunfire against protestors is a legitimate way to “assume control.” Now given America’s obsession with firearms, this is a straight-out dangerous proposition by the President. It was bound, and perhaps even designed, to encourage vigilante action against protestors.

In India, three senior BJP ministers did the job. In January, union Minister of State for Finance and Corporate Affairs, Anurag Thakur, during a rally just before the Delhi assembly elections, led a crowd in cheering an openly threatening slogan – “desh ke gaddaro ko, goli maaro saalo ko” (shoot the traitors!). It was a direct reference to the anti-CAA protestors, particularly Muslims.

During the same time, two-time BJP Member of Parliament from West Delhi, Parvesh Verma, said this:

He too was hinting at extrajudicial action against protestors. Less than a week earlier, senior BJP member from Delhi, Kapil Mishra, had shot this off:

Verma’s incendiary statement won him a notice and temporary ban from the Election Commission. These statements were nothing short of dog whistles for those itching to take the law in their hands and go after protestors. And since they all came from elected government representatives or ruling party members, they seemed like pointed offers of impunity for those who wish to do so.

Third, both the Kenosha and Jamia incidents reveal the innate violence in right-wing ethno-majoritarian politics that is currently in vogue in the two countries. They show that such regimes that bank upon riling up majority sentiments have an in-built tendency to move outside the law and encourage street violence to establish their agendas.

Sometimes the cops do the dirty jobs themselves, and at other times, non-uniformed hostiles appear out of nowhere.

Fourth, and finally, male teenagers were involved in both cases. At a deeper level, this reflects the ideological weaponisation of masculine teenage rage. Beyond this angst, is an overwhelming quest for relevance, recognition and redemption that, when marinated in racial or ethnic discontent, can cross lines to take direct action.

Here, one is reminded of the Nazi league for young people, Hitler Youth, that took part in incidents of anti-Semitic violence, including the Kristalnacht (Night of the Broken Glass, 1938). Carson Phillips of University of New Brunswick refers to this as “fascist masculinity” that is “brutal, hypermilitarised and unrestrained.”

We see a similar pattern of male youth engagement within today’s right-wing, supremacist projects, such as those in the US and India.

The Kenosha and Jamia shootings are striking reminders of the polarised, volatile and threatening times we live in today. They are broadly reflective of the intensifying culture of politicised pop violence that so-called democracies, and their elected units, are breeding day in and day out.

At the same time, they are glimpses of a peculiar social crisis that is creating killers out of young boys in the name of ideology and politics.