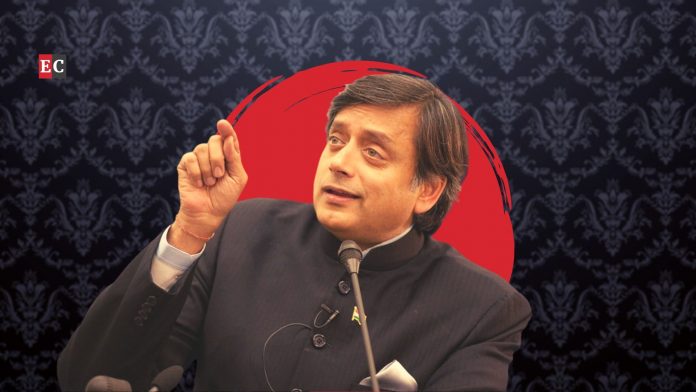 The Slovenian philosopher Slavoj Žižek speaks of the predominant mode of ideology today being one of disavowal. He gives the example of the Danish physicist Niels Bohr using a horseshoe amulet despite not believing in it. Bohr’s logic was that even if he didn’t believe in the amulet, it would work.

For Indian politician from Kerala, Shashi Tharoor, the same applies in reverse. Even though Tharoor, in his books such as Why I am a Hindu, believes in the ideology of majoritarian faith in India, he expects that it would not work in the diabolically violent and hateful way it does, often in experiential modes for the hapless many.

If for Bohr, the horseshoe would work despite disbelief, for Tharoor, casteism wouldn’t work in spite of his collaboration. Both are variants of the same fetishist disavowal.

Tharoor expects his belief in an ideology to shield him from its own negative aftereffects. This is similar to Žižek’s invocation of the ideology of disavowal in examples such as coffee without caffeine, beer without alcohol, eco-friendly bullets with built-in sprouting seeds, chocolate laxatives, copulation as exercise and others. Tharoor’s half-hearted disavowal of his own ideological positions occurs in the realms of race, class and gender.

In the racial realm of postcolonial praxis, if not theory, Tharoor has emerged as a notable voice after his famous Oxford Union debate where he apparently bulldozed colonial apologists with the very tools colonisation had provided – the English language, and European enlightenment notions of justice and reason.

Back home, his political pragmatism often slides into rank opportunism. This postcolonial irony is built into the super-articulate speech of Tharoor. But he seldom seems to be self-aware of the irony of his own position. As politician and stand-up comedian, Tharoor remains exposed since he spills his beans all too often, but that is the flipside of his vehement brilliance. His Malayalam is more hilarious than his English.

The ideological consistency of a Chandrabhan Prasad who identifies with English as a tool of emancipation, is sorely lacking in Tharoor, who perhaps is the exemplar of Macaulay’s vision of a class of people racially Indian, yet ideologically imperialist. His English is still an elitist and spectacular, aspirational tool of political power and not a universalist possibility for potential  emancipation.

Even as Tharoor denigrates British colonialism, he remains in thrall of its present-day variant in the form of US imperialism. From his days as a UN official to his political career with the Congress party, Tharoor has remained an apologist of neo-colonial imperialism. He has never bothered to condemn neo-colonialism, but rather, only disparages it slightly, hurrying to find excuses elsewhere.

As a mimic of the erstwhile colonial rulers, Tharoor’s suave posturing is sans post-colonial irony, which only serves the onanism fetish of liberal Indian middle classes. Due to his lack of strong ideological moorings, there have been speculations of Tharoor joining the right wing dispensation, which he himself has denied.

English as a language of the elite, and not as a language of liberation, has been Tharoor’s USP in his home state of Kerala, where middle class parents are invested, emotionally and otherwise, in procuring a world-class education for their children. Tharoor has managed to placate nativist constituencies by brushing up his rudimentary Malayalam, which is often more hilarious than his English. Tharoor’s role as an English language educator and trainer have immensely boosted his appeal for the Dravidian elite that have been in the same profession for long.

Back home in Kerala, Tharoor has managed to produce a veritable array of clones like Murali Thummarukudy, a United Nations disaster relief official. Tharoor’s proficiency in the language of the erstwhile colonial masters, has earned him bouquets as well as brickbats, even though the verbose language he uses has recently become the subject of ridicule and self-caricaturing by Tharoor.

Tharoor’s diplomatic French also comes handy once in a while, such as when introducing Czech filmmakers for international film festivals in Kerala. As Marshall McLuhan said, “the medium is the message.”

Tharoor’s articulation of ideology is resonant with echoes of colonialism even as he purports to criticise it. He brings very little theoretical awareness of mimesis or hybridity to such quasi political articulations and endeavours.

Tharoor’s disavowal of his own Shudra caste position has been brilliantly exposed by Kancha Iliah Shepherd in his coruscating critique of Tharoor’s apparently apologetic book on faith. Despite early memoirs that honestly related bitter experiences as a student in Delhi, Tharoor gradually veered away from a real critique of politics, to find refuge in the elitist veneer his geographical location in the south helps provide.

This quasi devotional stance towards the north Indian elite has been ironically called ‘Hanuman Complex.’ Tharoor deftly manipulates his ‘Hanuman complex’ into an ideological ‘Caliban complex’ whereby he externalises this internal complex outward as criticism of his own Prospero-like colonial masters in the West.

Tharoor, in his naivete of arrival, managed to offend a good section of Indians with his comment on the ‘cattle class’ and ‘holy cows.’ Such crass insensitivity from someone so suave was startling. Yet the incident exposed Tharoor’s position as a popular liberal leader. His nauseated disgust and expression of such while campaigning for votes amongst fish merchants in his constituency of Thiruvananthapuram, was also glaring.

The potentially negative fallout from this misdemeanour was handled by the Congress poll machine in Kerala which organised a quick photo shoot of Tharoor posing with marine animals (even though he would never be caught consuming them). Such mediatised ambivalence had been exploited previously by Congress politicians like PV Narasimha Rao.

But nonchalant Tharoor’s political ambitions seem to have been dampened to some extent by the ongoing investigative deliberations regarding the demise of his wife.

Tharoor’s posturing as messiah of sexual minorities and claims to gender sensitivity are contradicted by his nonchalant stance as a wronged aristocrat. His demands for token reparations from England for colonial injustices seldom translate into bold political positions for gender and caste justice back home.

Tharoor has never taken the bold stance of a critic of neo-colonial aggression, caste and gender oppression on a national stage. His claims to postcolonial angst derive from the flimsy grounds of his own quasi elite status as belonging to patrician feudal groups in Kerala. Aggressive pitching of himself as post-colonial liberal messiah both in the global and local arenas have not particularly paid off for this member of parliament.