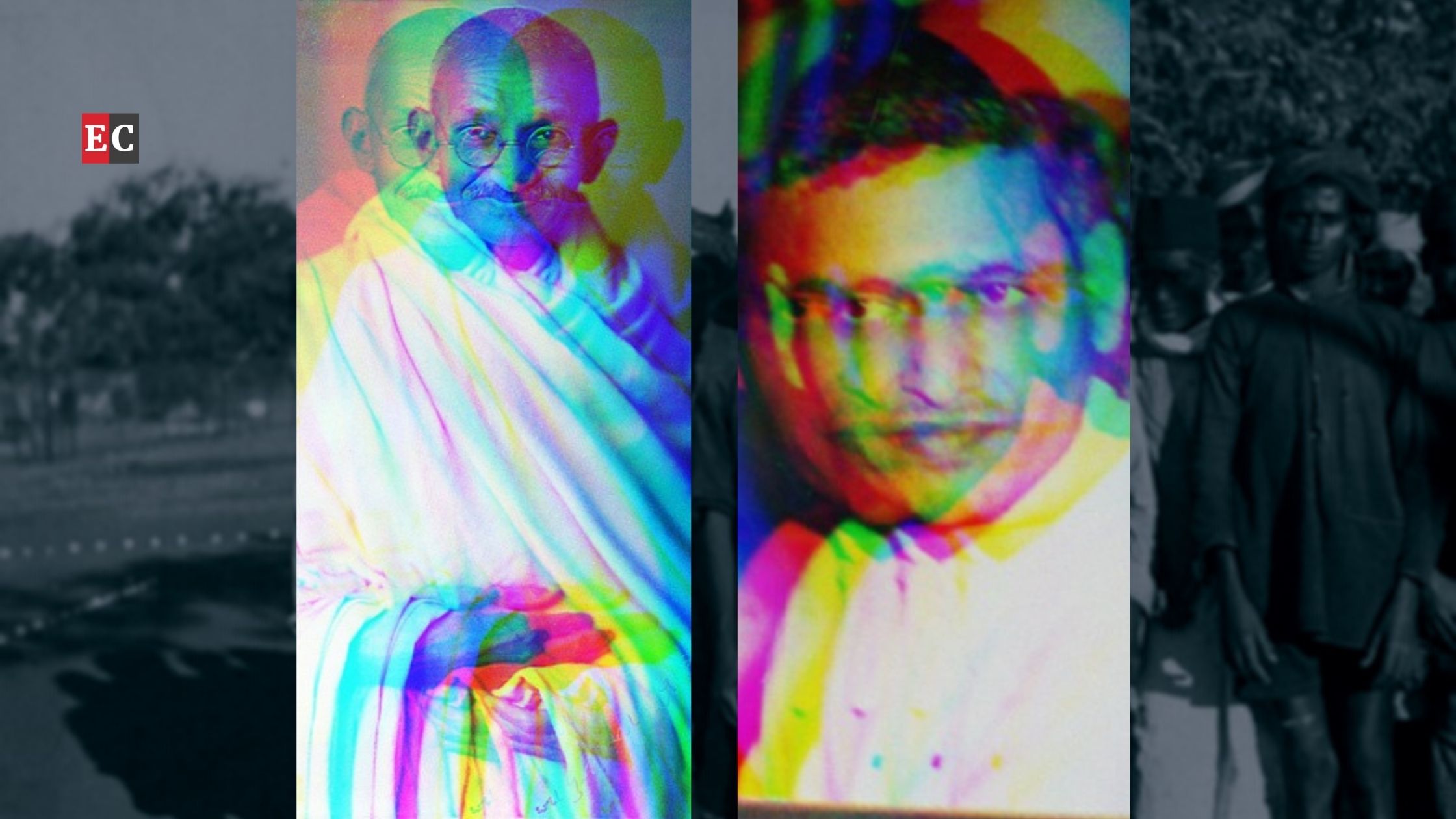 If Lord Vishnu’s avatars appear on earth to save Hinduism from ruin, then Nathuram Godse should be considered high in the running for being one.

Gandhianism, the vehicle of liberal Hinduism, could effectively work its poison precisely because people used it to counter orthodox Hinduism. On one side was Godse and on the other side Gandhi. The fact that from the perspective of the non-Hindus, Gandhi and Godse stood on the same side was completely elided.

Whenever Gandhi was called a representative of Hindu interests by the Muslims, Dalits, and Adivasis, the ‘liberal’ Hindus pointed to the fact that Gandhi had been murdered by an orthodox Hindu precisely for his sympathy for non-Hindus and thus, could not be called solely a Hindu leader. Gandhi gave his life for the minorities, the liberals argued, the least minorities can do is show some gratitude by accepting that Gandhians are different from those orthodox Hindus who killed Gandhi.

The good Hindus denounced Hindutva all the more enthusiastically so as to be able to hold on to Hinduism of the Gandhian kind. Till today, the distinction between Hinduism and Hindutva is a cornerstone of Indian liberal thought. Shashi Tharoor can be a ‘good’ Hindu while vociferously denouncing ‘bad’ Hindutva.

According to Gandhians, Hinduism isn’t the problem, its use by corrupt people is. Gandhi’s position was that the caste system is a corruption of the varnashrama. Ambedkar has already shown how this position is untenable as varnashrama would have no meaning without the rigidity imposed by caste.

The Gandhians today don’t take an open position towards varna but the asceticism and non-violence advocated by those like Medha Patkar, Vandana Shiva, Aruna Roy, and others is supposed to serve the same function of keeping Dalits in their place. Just like Gandhi asked the untouchables to continue being bhangis (caste group associated with cleaners and sweepers) because that was their work and all work is sacred, Gandhians ask the Dalits to give up their right ‘to swagger and swear and waste’— don’t do those things that upper castes do, don’t’ drink, don’t be materialistic, don’t amass wealth, make do with less, be better than them, be the children of god, and what not.

The Dalits are continually asked by Gandhians to take a principled non-violent stand against the Hindus. Gandhians are obsessed with non-violence for the same reason Gandhi was. Gandhi understood the cathartic role that violence played in psychologically freeing the oppressed of the oppressor. The violence itself has a humanising purpose because it demonstrates that the oppressor is made of the same flesh and blood as the oppressed and is not something divine.

This is especially pertinent in the case of Hinduism, which says that the Brahmin is made differently than the untouchable. In his Fanonian reading of Baburao Bagul’s revolt, Yogesh Maitreya posits the importance of violence to break free from Brahminism. He points out that freedom is hardly conceivable without violence because violence is a demand created by the system of oppression itself.

“The endemic tendency of the masses and the perennial preaching of non-violence both reveal the fact that the masses had already been driven to a situation in which violence had become inevitable for even a marginal amelioration of conditions. Hence the need for sacralizing non-violence and situating it at the heart of the so-called Hindu Indian tradition,” G Aloysius writes in Nationalism Without A Nation in India.

Many people say that movements like Narmada Bachao Andolan against big dams have failed. They do not understand that these movements were never supposed to stop the big dams. They were merely meant to divert the energy of the masses.

Non-violent protests are not intended to change the order of society in any manner or achieve any tangible results, like the stopping of big dams. They are only and solely intended as a safety valve or restraining force to prevent terrorism, revolution, disorder, and Naxalism – that is everything the Hindus are mortally afraid of. The aim of the Gandhians has always been to edge out the perennial threat of the revolt of the masses against the Hindu order by displacing the more radical ideologies by their differently-worded Hinduism.

Left alone, the masses are likely to go astray like they did at Naxalbari. Hence, one has to engage them in some innocent pre-occupation or another – like long walks, dharnas, hunger strikes, and others, until they are called upon to demonstrate to the Indian state their solidarity with the national (Gandhian) alliance of people’s movements through their sheer passive, inactive presence.

The autonomous growth of the masses would have been a disaster to the Gandhian understanding of a harmonious society in which the masses do not, at any cost, get to have a say in their own governance. The Gandhian agenda has always been to save the masses against themselves. The turn towards violence is always construed as disastrous for the masses and not for those who would be at the receiving end of the violence.

These Gandhians walk a tightrope with admirable skill and dexterity: they generate a controlled mass mobilisation for purely demonstrative purposes, never allowing the masses to take over the leadership (or in the accepted parlance ‘to turn violent’) and at the same time constantly send feelers to the rulers for negotiations.

The Gandhian suppresses political confrontation between Hindus and others in India by making Hinduism a matter of social reform. The Gandhian credo has been summed up by Gandhi himself:

While a political confrontation would pit the masses against the Hindus, these moral and religious issues became the domain of Hindu intervention solely, something to be dealt with between good Hindus and bad Hindus. The masses are not treated as human beings with political demands but simply as the oppressed whose oppression must be lightened by the well-intentioned intervention of the good Hindu.

Untouchables were the ones subjected to untouchability but got to have no say in how to remove it and the gains they needed to make from its removal. ‘We have to obtain not the salvation of the untouchables but ours by treating them as equals… ’.

The political demand for equality raised by the untouchables which should dynamite the Hindu order out of existence thus becomes merely a correction to be made to improve the Hindu social order. In Gandhian vocabulary, social reform represents the entire gamut of social changes that are minimally necessary to prevent the annihilation of the Hindu order.

Can Hinduism be reformed?

Nehru himself became the harbinger of modernity with his focus on science and industrialisation. The “modern temples of India” were supposed to unite the country by offering a place to everyone, unlike the old temples which had been divided on caste lines. The commitment to liberal democracy was used to mask the takeover of all modern institutions by secular liberal Hindus who claimed to be above caste and working for the entire nation.

Dalits saw through this bluff and said that Hinduism, whether orthodox or liberal, was inherently casteist and thus not acceptable. BR Ambedkar in his seminal work, Annihilation of Caste, wrote:

There is no agreed-upon definition of Hinduism, no book, no tradition, no Supreme Court judgment, nothing that specifies once and for all what Hinduism is or who a Hindu is. In this scenario, we have to look at the construction of Hinduism historically and see what the term has come to mean and what it represents.

The conception of Hinduism as common Indian tradition of all residing in the subcontinent became dominant only in the colonial period through collusive efforts of the ruling British and the socially dominant Brahmins. The British did away with the rajas and maharajas but needed people to man the bureaucratic structure they had created and to collect and deliver land and agricultural revenue.

Brahminised groups used this opportunity to become de facto heads and representatives of the larger public. The political unity of the subcontinent created by the British for purposes of administration allowed these Brahminised groups to project a social unity under the banner of an all-inclusive Hinduism read primarily through Brahminical texts.

The British thus became invested in upholding the caste system and in projecting Hinduism as a common religion for all. Brahmins gave birth to Hinduism to justify an extractive system and Hinduism has remained true to its origins ever since.

“Hindu/Hinduism is merely an alternate term to that of the Brahmin/Brahminism and as such it does not refer to any group or individual beyond those who accept and abide by the authority of the Brahmins and practice caste,” wrote noted Tamil anti-caste activist, Iyothee Thassar, as cited in G. Aloysius’ Dalit-Subaltern Emergence in Religio-cultural Subjectivity.

Since Hinduism has been projected as the default religion of all those born in India, there is no neutrality possible in the matters of Hinduism. One is either anti-Hindu or pro-Hindu. Similarly, if a person is not anti-caste, then they are pro-caste. BJP or Congress, Prakash Karat or Mohan Bhagwat, Ravish Kumar or Arnab Goswami, Medha Patkar or Baba Ramdev — none are for demolishing Hinduism and thus they are all Hindus and ultimately pro-caste.

One does not have to be an orthodox Hindu to be pro-caste. As Ambedkar showed, even a secular person who thinks Hinduism can be reformed and does not need to be destroyed lock, stock, and barrel is pro-caste. According to Ambedkar, Hindu shastras have to be rejected outright. He did not suggest reforming caste or said Hindu shastras should be modernised.

There is no way of modernising Hinduism because the very principle of Hinduism is pre-modern ascriptive hierarchy. Caste is the only thing that is sacred to Hinduism and Hinduism is not possible without caste. Just like a religion that rejects Jesus can be called many things but not Christianity, anything that rejects caste cannot be called Hinduism.

Vote for Gandhi, they say, if you don’t want Modi or Godse. Liberals say that all those people who do not want Godse should unconditionally support Gandhi. They blackmail the population into supporting Gandhi by saying all those who don’t support Gandhi are Rashtriya Swayamsevak Sangh (RSS) agents. What the liberals said about Sharjeel Imam when he criticised Gandhi in his speech at Aligarh Muslim University (AMU) is a very good case in point.

To the liberals, it does not matter that Gandhi is an apologist for Hinduism. They say all that matters is that Gandhi is against the RSS, never mind how he brutally suppressed all minority assertions, supported feudal relations in villages, and essentially guaranteed the rise of the RSS by giving uncontested power to Hindus.

Besides, even if we agree that Gandhi is against the RSS, that doesn’t mean anything because we do not want to get rid of orthodox Hinduism only to be stuck with liberal Hinduism. Gandhi and Godse are both complicit in the same system that allows Hinduism to survive. This is why both Gandhi and Godse have to be rejected together in favour of the invisibilised third choice — that of non-Hinduism.

is a writer based in India. He uses the Jain debating methodology of Syādvāda to make arguments.