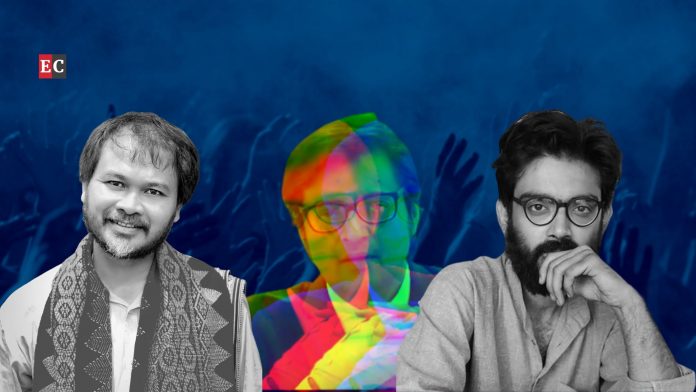 When Mumbai Police arrested Republic TV editor-in-chief Arnab Goswami some days back, India erupted in a fierce debate about democracy, freedom of speech and expression, and freedom of the press. While some believed that the dramatic arrest was Maharashtra government’s revenge against Goswami for taking it on, others brushed it off as karma. Goswami, they believed, was getting a dose of his own medicine.

Needless to say, the nation became polarised into various camps. The ruling Bharatiya Janata Party (BJP) and its allies firmly held the view that the Maharashtra government, led by Shiv Sena, Nationalist Congress Party (NCP) and the Indian National Congress (INC), and police were trying to intimidate Goswami and silence his voice. Pro-BJP voices on social media even complained about fascism.

But ironically, a few days later, on 19 November, in Goswami’s own home state of Assam, police detained four artists while they were drawing a mural of jailed political activist Akhil Gogoi. What is even more astonishing is the fact that this is the same BJP-led state government that had boldly supported Goswami’s constitutional right to express himself.

Even the Chief Minister condemned the Goswami’s arrest, calling it a “Black Day for Indian democracy.” But the drastic action taken against the artists in his own state shows the redundancy and futility of his entire statement.

Akhil Gogoi of Krishak Mukti Sangram Samiti (KMSS) has been in jail under several charges for the past many months. He and his associates were put into prison during the Anti-CAA (Citizenship Amendment Act) protests in Assam to strategically undermine the impact of the entire popular movement.

Though the artists were let off after some time, and eventually they completed the mural, the act is symbolic of the witch-hunt currently underway across the entire India, wherein voices who dare to disagree to the ideology of the ruling dispensation are being imprisoned, intimidated or killed. The charges of vandalising government property against the artists also seem like an attempt to cover up personal grudges of the government against the subject of the mural.

From time to time, many such murals have been drawn, be it of the Assamese singer, Zubeen Garg, or other famous personalities of the state, but no one was arrested by the police then. In these partial times, we must ask, why is it so crucifying to the authorities that a bunch of nondescript artists painted Akhil Gogoi on public walls in the state’s capital? Is it because of his role in the anti-CAA movement or is it just a way to traumatise supporters of Gogoi because of the latter’s decision to contest the upcoming state elections in 2021?

These artists don’t stand alone. There is a long queue of intellectuals, activists and artists who have been hunted down by the government for their dissentious performances. It was not long back when we heard of the assassination of Gauri Lankesh, Narendra Dabholkar, Govind Pansare and MM Kalburgi.

The wounds hadn’t even recovered fully when news of fresh political imprisonments started gushing in like water in a rapid – from an ailing 79-year old poet to a Delhi University professor who is intensely popular amongst his students, the state went after a whole bunch of people who dared to speak up against its atrocities.

The same happened during the Emergency in 1975. Just that silence then was enforced whereas silence now is traded. Indian mainstream media largely decided to remain loyal to the state when it arrested public intellectuals like Hany Babu and poets like Varavara Rao. The casteist roots of Hindutva politics were exposed when the infamous Bhima Koregaon arrests were made, contradicting the ‘divine’ words of the Prime Minister and his gimmick of washing the feet of lower-caste sanitation workers.

The Assam government was eager to arrest Sharjeel Imam, and the people of Assam cheered without even taking the trouble to listen to his entire speech. His arrest was celebrated as a win of the state over an ill-educated young boy, further portraying how people can be victims and supporters of victimizers at the same time. Ignorance is the differentiator between their dichotomous stances.

In the case of the artists, the people knew the circumstances and the political angle to the entire arrest, whereas while considering Imam’s arrest, they ignored an important fact. His political opposition to the BJP government was ignored completely while choosing sides. And so, a political arrest was manipulated into being an answer to the bogus, propagandist questions of a state’s pride and honour.

It was made to look as if Imam was trying to say that Assam should be ‘cut off from the rest of India’ in a separatist sense, whereas all he proposed was a chakka jam (motor vehicle strike) to protest against the CAA and other divisive regimes like the National Register of Citizens (NRC).

What’s more, internet connections were shut down in the midst of anti-CAA protests and forces were deployed to put an end to protests. People were beaten and shot at. Manhandling protesters seemed the only way of the state’s resistance. In that regard, Imam’s statement only seemed like a statement of solidarity if heard in totality. But the silence of most of the Assamese intellectuals on Imam is unfair on the young Muslim leader’s part.

To be more specific, even freedom of the press, and not just the broader freedom of speech, has also been attacked time and again by BJP governments in Northeast India. In December 2018, Kishorechandra Wangkhemcha, a local cable network journalist in Manipur, was arrested under the National Security Act (NSA) by the BJP-led coalition government in the state.

In Assam, during the Anti-CAA protests, the police entered the premises of a local TV news channel, Prag News, and used force on a few staff members outside the office. Then, they did the same near the reception area. As the internet was suspended in the area, the press was the only way of knowing what was happening, between armed men in uniform parading on the streets and protesters agitating against the government they elected.

An advisory was also issued to TV channels by the Narendra Modi-led government to not to show any footage that might affect law and order or ignite anti-nationalistic feelings among the public.

Populism and its propaganda can’t be resisted by picking and choosing the subjects of solidarity. All political prisoners are victims of the oppressive state. There must not be any differentiation between Gogoi and Imam as both of them were targets of the same Hindutva regime that has a history of violence and unconstitutional aggression. When the state is not discriminating, why are the people?