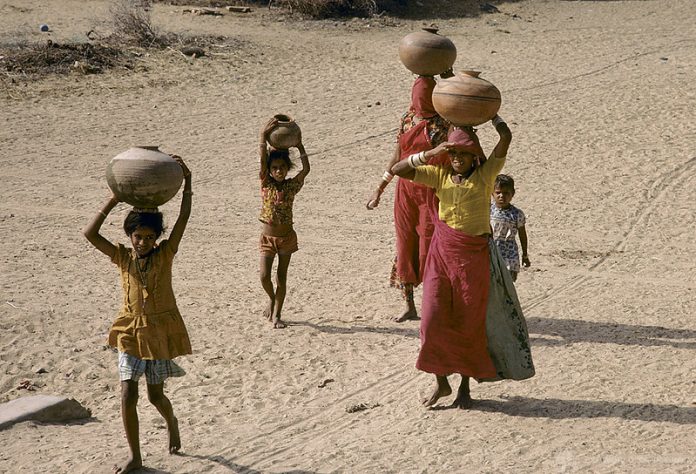 Water, the elixir of life, is a complex and multi-faceted subject of study. There are various nuances associated with this natural resource, the scrutiny of which has picked up over the past few decades with an aim to to give an ethical outlook, and an understanding and approach targeted at addressing issues of inclusivity and human rights.

Gender roles and relations in the water sector have been very rigid since many years, mostly because of stereotypes, cultural norms and notions of segregation, such as caste barriers. These roles and relations have become fluid over the years and a lot more needs to change.

Women in the water sector have gained significant traction in the developed world, showing a way for gender equality. South Asia, on the other hand, is lagging behind on various aspects of gender equality. In the Indian context, the representation of women in positions of power is still very scant despite constitutional provisions being in place.

This is another reason, out of many, why India is consistently performing low in the Global Gender Gap report published every year by the World Economic Forum.

There is a lack of representation of women in Water Users Associations (WUAs) in rural areas and also a gender-skewed representation in the context of hydro-diplomacy. Recently, a webinar series on hydro-diplomacy in the Brahmaputra basin was hosted by the Indian Institute of Technology Guwahati (IIT-G) wherein experts from the European Union (EU) argued on the importance of water and gender relations with respect to transboundary water management.

The power relations at the household levels are reproduced outside in the professional environment. Male dominance in the quinary sector, which involves government bodies, policy-making, universities to name a few, paves way for a male-female gap in the processes of high level decision-making.

Pre-conceived notions about gender and behaviour have a huge role to play when it comes to shifting power dynamics. The fact that in a world ruled by alpha-males, a woman just became the Vice President in the world’s oldest democracy could bring about a paradigm shift in behaviour and thinking about gender roles. It only goes onto build hope and determination for greater representation of women, that in turn, has an impact on domestic politics and geopolitics.

We need to understand that women are not a homogeneous whole. There is a great degree of intersectionality involved. In India, intersectionality in terms of water is varied for women across different states. The aspects of caste, tribe, culture, patriarchy and geography can never be looked down upon. They have as much role in popular folklore as much as in modern day policymaking.

Even technologies are not gender-neutral. Outside the domestic front, very few women are found in roles pertaining to control and management of technology. This holds true for water technology as well.

For instance, in a rural setting, men, and not women, install hand pumps. On the other hand, collection of water is often designated to women who also have to attend to domestic chores. Even mainstream or core engineering courses, like mechanical, civil and electrical, have a highly skewed-gender ratio in a classroom scenario.

Hence, the stereotyping starts very early on and makes it very difficult for women to break them. The need of the hour is to have more women in core engineering (or broadly, STEM) fields that deal with dams, water resources, groundwater management, hydrology, and the likes. Gender mainstreaming thus plays a pivotal role in water governance.

Lack of access to toilets, taboo around menstrual hygiene

In the developing world, women have been left behind in sanitation needs that compromise with their health. The Swachh Bharat Abhiyaan, which is India’s flagship programme on cleanliness, was responsible for building a discourse around toilets and pushing states towards achieving an open defecation free (ODF) status.

It was popularised to such an extent that Bollywood ended up making a commercial film called Toilet: Ek Prem Katha on the issue. The protagonist of the film fights at great length to persuade his family to build a toilet in the vicinity of the household in order to win the love of his life, who just left him because there was no toilet.

Going out in the fields to defecate compromises with women’s health and dignity. Dignity is important because of India’s notorious track record in violence and crimes against women. Women and children mostly go out in the open fields to attend to nature’s call in the wee hours of the day.

Not having an access to toilets is another reason for girls dropping out of schools. In many areas, parents willingly send their children to school because they are ensured free mid-day meals and basic sanitation needs through toilets. This clearly renders toilets a make-or-break point to win the hearts and minds of the downtrodden and gaining electoral traction.

Development and healthcare policies have time and again remained silent on menstrual hygiene and the associated water, sanitation and hygiene (WASH) practices. Deemed to be the largest sanitation survey in the world, Swachh Survekshan (a survey on cleanliness ranking of Indian cities) has also failed in incorporating the same. It is only from this year’s edition that the country will get to know how well we manage our menstrual waste and its implications on environmental sustainability.

The aspiration for a better quality of life has compelled people from rural India to migrate to urban areas. Most of the times, it is men who migrate to big towns and cities in search of better opportunities, thus putting the additional burden on women to manage agricultural fields in a changing climate.

In water scarce regions, women are involved in looking after households because of set gender roles and this gives rise to women’s water burdens. It is defined across two main indicators – time needed to collect water and the distance travelled to the nearest water source. Women queuing up in long lines to collect water are a very common sight in water deficit regions of South Asia. It is during this time of water collection that women seek to socialise with other women to create bonds and build social capital.

Ecofeminist perspectives can also be used in understanding traditional water harvesting systems of India. Two such examples are the Dongs of Assam and the Apatani system of Arunachal Pradesh.

The Dong system is akin to canals that make sustainable use of natural water resources, mostly small rivers, wetlands that are locally known as beels, perennial swamps, and the likes to irrigate paddy fields. It is a prevalent traditional knowledge system among the Bodo plains tribe of Assam.

I had to interview Misso Anu (a PhD scholar in Rajiv Gandhi University, Itanagar and an Apatani) for a story on adaptation strategy in a changing climate in the Himalayan region. The story was part of a fellowship that I had taken up at The Energy and Resources Institute (TERI) supported by the Earth Journalism Network.

Misso tells me over a telephonic interview that more women are taking up agriculture, as men tend to migrate to cities or take up government jobs. She elaborates that women play a very important role, wherein the tapping of streams is done by men, tilling of soil is a combined work of men and women, and transplanting of paddy is essentially done by women.

Women who cannot take up businesses or government jobs prefer taking up laborious tasks like working in the fields. Even such traditional water harvesting systems meant for agriculture could be used as case studies to understand the issues surrounding women’s water burdens.

The second term of the government of Prime Minister Narednra Modi lays a great focus on water conservation and supplying water to the needy through various schemes like ‘Nal se Jal’ and ‘Har Ghar Pani Yojana’, apart from state-specific water schemes.

Schemes need to be designed for the upliftment of marginalised communities and bringing them under the ambit of the decision-making process. As water is a multi-disciplinary subject, it calls for the involvement of multiple stakeholders in order to ensure the principle of equity and social justice in the allocation of this natural resource.

India’s National Water Policy (2012) talks about Water Users Associations (WUAs) being given statutory powers to collect and retain a portion of water charges, manage the volumetric quantum of water allotted to them and maintain the distribution system in their jurisdiction.

This paves the way for reducing water conflicts and facilitating water security in rural areas. To augment women’s role in water-livelihood linkages through decentralisation and community water management, Jal Saheli and Pani Panchayats have been brought together to mitigate drought in the Bundelkhand region. Through adequate capacity building and training programmes, women are taught to conserve water by constructing water ponds, undertaking rainwater harvesting to recharge wells and building check dams.

These ‘Jal Sahelis’ or ‘water friends’ also influence the local authorities to install water pumps wherever required. Such initiatives ensure women and public participation at the village level in an otherwise patriarchal society, thus giving hope for women in leadership roles for equitable water allocation. Water flows are also determined by power relations.

In the water-food-energy-ecosystem nexus, gender mainstreaming needs to be foregrounded. Progressive policy interventions are often critiqued as promoting only women’s issues, while at the hindsight, the idea is to highlight gender norms, roles and relations and why they need a revamp with changing needs and aspirations. The world truly needs more women in leadership roles in the water sector more than ever now.

is a Media Fellow at The Energy and Resources Institute (TERI), supported by the Earth Journalism Network. She was previously associated as a water sector analyst for the preparation of State Specific Action Plan (SSAP) on water for the Government of Meghalaya.