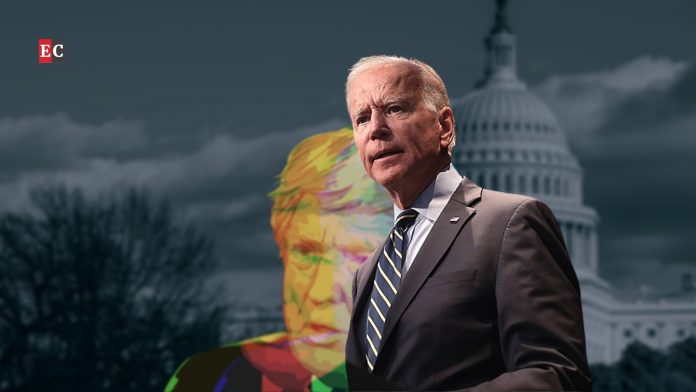 “Democracy under attack” has become a common refrain in the United States over the past four years, buoyed by Donald Trump’s blatant disregard for either the surface or substance of responsible governance, and more recently, his direct and meritless attacks on the country’s electoral system.

This view’s culmination sees President Joe Biden as a comforting reversion to the American mean, a President capable of re-instilling a politics of decency (at least at the rhetorical level) and scruple inside the institutions manned by executive prerogative. Its danger lies in a view of Trump as aberrational instead of symptomatic.

The localized events of 6 January put into perspective the immediate dangers of an aspirational anti-democrat and his mob of followers, fundamentally too lazy to muster purposeful violence in a society with little recent history or appetite for widespread domestic political brutality aimed at any but the most marginalized of its members. This is not a society on the precipice of destructive large-scale anti-institutional mobilization. At the fringes, it remains to be seen.

Biden’s ability to successfully label the Capitol insurrection as a manifestation of Trumpism’s latent authoritarianism quite clearly has allowed him to argue for a return to party politics within institutional confines and traditions. This argument underestimates the Republican Party’s cynicism and misunderstands the way Trumpism emerged from institutional frailty.

In some ways, the quiescence of the vast majority of Trump supporters, egged on by a President congenitally incapable of manufacturing coherent conspiracies, yet consistent in his determination to undermine public support for electoral mechanisms, reveals something about the Republican Party’s broader calculus.

Cynically and perhaps criminally, a variety of unsavory elected officials heeded the President’s call to question and cast aspersions onto the election. Yet, in the body where it mattered the most, the United States Senate, a majority of Republicans abandoned Trump’s machinations and voted to certify the election.

That an act, which as recently as 2016 has been universally considered a pro forma expectation, emerged as a noteworthy signal of independence testifies to the broader system’s degradation.

Republican Senators, much like Republican presidential candidates, benefit from recent demographic trends that have furthered their structural advantage in the electoral process. Effectively, Biden won the election by 0.6% — the margin at which he took his 270th electoral vote — instead of the 4.4% national spread. In the Senate, where representation remains even across states regardless of population, the grotesqueries only surmount.

The unchecked vicissitudes of history have constructed an upper chamber whereby the 1.6 million residents of North and South Dakota have twice the legislative power of the almost 40 million people in California. The Republican base remains highly electorally efficient. With advantages this large, the GOP can bide its time.

Biden’s immediate role, as envisioned in his inaugural address, encompasses the performance of wizened comity, though whether this can be transformed into the “unity” on which he dwelled requires a definition so sparse that it foresees little more than a rhetorical ratcheting down and an elimination of the derogatory and crass politics and policies of his predecessor.

Biden’s immediate hopes rest on his being so familiar a presence as to cause little consternation amongst those most willing to view the average Democrat as transformational leftists and, in turn, giving cover to Republicans willing to work alongside him. On a superficial level, as the erstwhile Presidential candidate Andrew Yang ascertained, Biden’s familiarity and normalcy give his policies the appearance of moderation regardless of their content.

This is no mean advantage given the current crop of bills being bandied about within the Democratic caucus. Whether his personal appeals can motivate Republican cooperation, in turn allowing for the passage of legislation capable of improving lives and mitigating the cynicism and frustration on which Trump thrived, remains an open question.

Biden’s immediate challenge will be the federal supervision of a massive COVID-19 vaccine distribution project and the passage of additional economic relief through Congress. His $1.9 trillion proposal offers a host of excellent policies and remedies both for short-term economic dislocation and for broader policy goals aimed at the economically marginal.

A team at Columbia University estimated his proposal would reduce child poverty by 50%. It is a comprehensive and thoughtful plan. Its price tag indicates recognition that Barack Obama’s 2009 stimulus was not sizeable enough. The successful resolutions of these two challenges have the opportunity to increase voter appreciation for government capable of redressing societal inequities.

The question remains whether this legislation can pass a 50-50 senate controlled by Democrats through the Vice President’s tie-breaking vote.

As with most things over the next four years in the domestic policy sphere, the Republican Party will remain key.  Electorally advantaged, institutionally nihilistic, the GOP discovered a newfound love for the filibuster — the ability to assign bills to purgatory unless 60 votes can be secured to end senate debate — during Obama’s term when its usage skyrocketed to levels never before seen in US history.

Filibuster reform, requiring an alteration of Senate rules, needs a mere Senate majority to pass. Its removal will be a requisite for legislative action in accordance with Democratic campaign promises. Elimination of the filibuster does not push the United States towards greater majoritarian democracy. Rather, it eliminates the innovative ways in which supermajority requirements can stymie majorities, and as such, helps rectify the perennial standstill of US politics from which figures in the vein of Trump benefit.

The moment will be pushed to its crisis sooner than later as Republican intransigence towards Democratic policy begins to manifest.

The other pressing issue remains democratic reforms capable of better aligning majority opinion with its representation in Washington. Headlines indicating a split in the GOP appear premature and hasty. The incentive to reform, given an electoral playing field as advantageous as theirs, dissipates over time, particularly given opposition parties’ historical track-record in midterm elections and the clear pull Trump has demonstrated on his party’s base of voters.

Here, Democrats have the opportunity to both redress, however partially, the longstanding injustice whereby a minority of Americans control a majority of the Senate and have elected the President in two of the past five elections for that office. At the Presidential level, the most straightforward way to accomplish this would entail a Constitutional Amendment eliminating the Electoral College. The supermajorities required for this path render it an impossibility.

The second alternative involves adding additional states to the Union, namely Puerto Rico and Washington DC, which appear the two most viable candidates. The expectation that both these states will elect Democrats would help rectify current imbalances (at both the Senate and Presidential level). Each can be added to the Union through an Act of Congress — though a court challenge remains likely in the case of Washington DC.

The lambasting of proposals extending federal representation to American citizens as radical by Republicans only underscores the GOP’s concerns about competing in a more democratic landscape given the party’s current configuration. This will be the test for Democrats and will expose fissures in the party between those who view Trump as a historical aberration and those who view him as the product of a party untethered from majority opinion and indulged by a set of structural advantages incapable of incentivizing reform.

To merely continue the Union in its present state, hoping Biden’s soothing presence indicates normality returned, remains akin to an alcoholic taking a month away from drink.

is a doctoral student in History at the University of Pennsylvania.