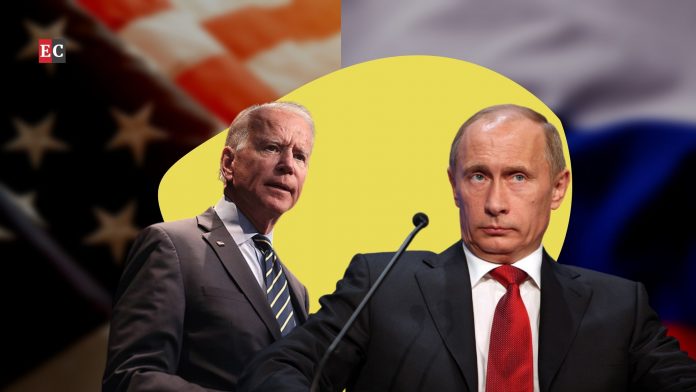 Hours after signing an executive order on 15 April, which imposed sanctions on Russia, US President Joe Biden stated that the door for diplomacy and engagement with Moscow was far from closed. He said:

“Throughout our long history of competition, our two countries have been able to find ways to manage tensions and to keep them from escalating out of control.”

Days before the imposition of sanctions, Biden had spoken to Russian President Vladimir Putin. During the conversation, Biden had indicated that he would be taking action against Russia for interference in the 2020 US Presidential election (a US intelligence report had pointed to Iranian and Russian meddling in the 2020 election), as well as cyber attacks against the US government.

While emphatically stating that the US would firmly safeguard its interests and not refrain from strong retaliation in response to any provocative actions by Russia, Biden also proposed a summit with Putin in Europe.

Significantly, during his conversation with Putin, Biden according to a White House release “discussed a number of regional and global issues, including the intent of the United States and Russia to pursue a strategic stability dialogue on a range of arms control and emerging security issues, building on the extension of the New START Treaty.”

Soon after the Biden administration had taken over, US decided to extend the treaty that came into force on 5 February 2011 and would have ended on the same date in 2021. The treaty limits the number of deployed strategic nuclear warheads to 1,550 and deployed missiles and bombers to 700 for each country.

The sanctions imposed by the Biden Administration on 15 April include expulsion of ten Russian diplomats stationed in Washington DC, sanctions on six Russian technology companies that allegedly provided support to Moscow’s hacking operations during US elections, barring US financial institutions from participating in the primary market for rouble and non-rouble denominated sovereign bonds from 14 June, and individuals and entities associated with Moscow’s actions in Crimea.

Significantly, Biden’s predecessor, Donald Trump, had defended Russia against allegations of interference in the US Presidential election of 2016 that got the Republican President to the White House.

Russia responded to the imposition of US sanctions by expelling US diplomats, imposing sanctions on eight US officials, and proposing to put an end to the activities of American NGOs in Russia given that they allegedly interfered in Russia’s politics.

‘Weak’ sanctions by US?

According to many observers, the sanctions imposed by the US on Russia were not particularly harsh and underscore the point that the Biden administration, while seeking to send a strong message to Russia, also realises that it cannot permit the bilateral relationship to slide down any further for several reasons.

First, US needs to cooperate with Russia on a number of global issues, such as jointly battling the COVID-19 pandemic, confronting challenges posed by climate change, and working together to resolve the Iran and North Korea issues.

Also read ‘Russia and India: As Close As Lips and Teeth?‘

Second, it needs to prevent Moscow from moving closer to Beijing. Last month, after Biden’s strong attack on Putin, Lavrov and his Chinese counterpart, Wang Yi, held a summit in China, days after Biden had attacked Putin in an interview. The Russian foreign minister criticised the US for its role in ‘underming the world order’ and both sides also proposed the need for reducing their dependence on the US dollar.

An anonymous paper recently published by the Atlantic Council had emphasised on the need for a pragmatic US policy vis-à-vis Russia, not least to prevent Moscow from moving closer to Beijing. The paper, titled The Longer Telegram, argued:

“..United States must rebalance its relationship with Russia whether it likes it or not..Allowing Russia to drift fully into China’s strategic embrace over the last decade will go down as the single greatest geostrategic error of successive US administrations.”

Third, a number of US allies have strong ties with Moscow, and the US cannot expect them to make clear choices – an important point also made by a large number of US commentators.

In conclusion, Biden’s approach on Russia has so far been a blend of diplomacy and firm measures. His focus on dialogue and finding common ground on important bilateral security issues and global issues is significant.

Washington DC, while giving precedence to its own interests, needs to adapt to the changing geopolitical situation, especially the warming relationship between Moscow and Beijing.