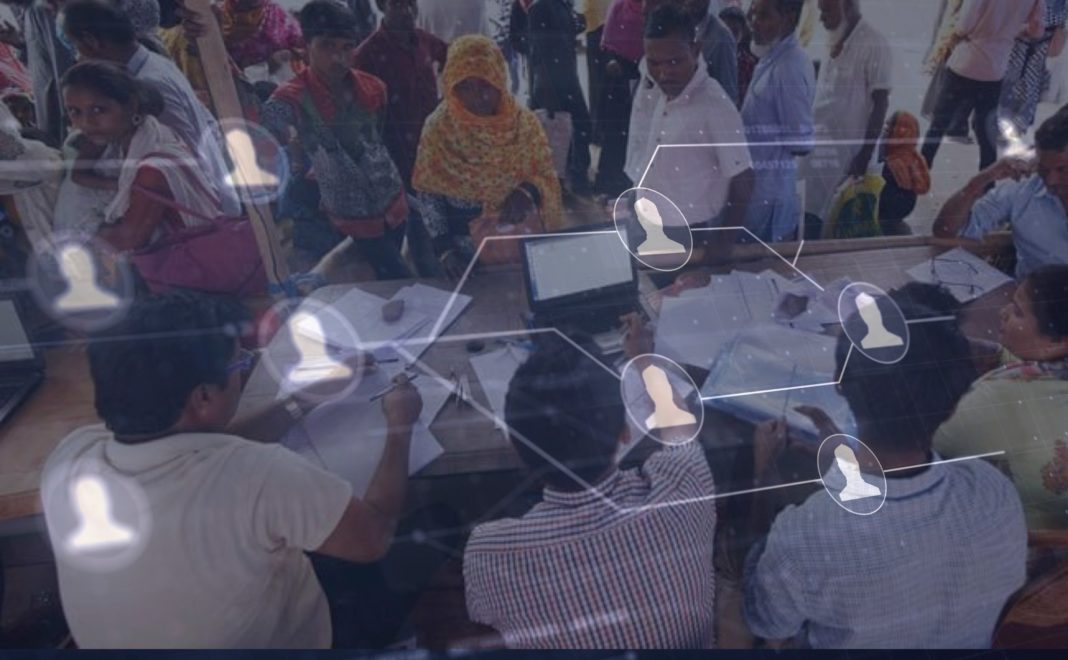 In February, the online data of Assam’s National Register of Citizens (NRC) suddenly went missing from its website. Authorities attributed the mysterious vanishing act to their failure to renew the subscription to the cloud server, which hosted the data. This server is owned and maintained by Wipro, an Indian multinational IT company headquartered in Bengaluru.

The updation of the NRC is a Supreme Court-mandated headcount exercise, exclusive to the state of Assam, that began around 2015 and is aimed to filtering out “illegal immigrants” from Bangladesh. The final list, released on 31 August 2019, left out close to 1.9 million (19 lakh) people. It is currently in the appeals stage, but remains stalled due to the COVID-19 pandemic.

The disappearance of the NRC data from the Wipro-managed server should be an entry point to understand how capitalistic infrastructure is shaping critical issues like citizenship in India. It shows that technology combined with capitalistic ventures is no neutral, ‘apolitical’ site.

In fact, technologies can add new layers of complexities to a state-making project like NRC. These complexities need to be deconstructed.

So how did an IT giant like Wipro even get involved in an enumeration project in Assam? It is reported that Wipro was the sole bidder for the second time when the government released tender notices for the project on system integration in 2014. Once it was successfully hired, it sub-contracted the task of hiring data entry operators and paying their salaries to Integrated Systems and Services (ISS).

Unlike Wipro that boasts of the NRC project on its website, ISS, on the other hand, has avoided publicising the association.

Notably, the proprietor of ISS, Utpal Kumar Hazarika, was a former Customer Services Manager in Wipro Limited. Now, considering there is little public knowledge and discussion about the process through which ISS came on board, one can only speculate.

The technical and administrative parts of the NRC, starting from the softwares used to the labour recruited to handle those softwares, are not monolithic. Several other companies, apart from Wipro and ISS, were involved – such as Bohniman Systems, Madoc Technologies, Trans Technologies Solutions, RJ45 Technologies etc.

Hence, it is important to understand that the capitalistic technological infrastructure involved worked in an intricate and an extremely dependent network. The working of this infrastructure in networks was important so that the NRC updation process could be a profitable venture for the parties involved without having to take accountability for glitches.

During my conversations with several data entry operators and supervisors, it was revealed that the softwares that were introduced and asked to be installed in every NSK had regular issues and always needed updating. This meant more updated softwares needed to be purchased using taxpayers’ money by the government.

According to media reports, the administrative cost of the whole NRC project has nearly touched 16 billion USD (Rs 1600 crore). There would also be a recurring cost for perpetuity, wherein these capitalistic infrastructures would continue to earn for hosting, securing and maintaining these data. So the ‘loss of NRC data from cloud for non-payment’ should not be seen as a mere ‘technical glitch’, but as one manifestation of the neoliberal state-capitalistic infrastructure combine mocking and teasing people whose bare lives and rights depend on this process.

It is almost as if the capitalistic infrastructure is indicating that it can hide, disappear or hijack the data that can decide the future of millions based on ‘payment or non-payment of dues’.

Also read ‘Crisis of Citizenship: A Critical Reading List on Assam’s NRC and Beyond’.

Further, the fact that this infrastructure worked in networks with several parties involved, helped it evade accountability, while letting it reap profits. Operators and supervisors revealed to me that the ISS owed them three months’ worth salary. On being asked why they were not putting any pressure on their employer, a supervisor retorted that when they go to ISS, the firm blames Wipro, and when they go to Wipro, the government is blamed for non-payment of funds. They really had no idea whom they should even approach.

This ambiguity that is brought about by the involvement of multiple parties in an intricate network is how capitalistic infrastructures routinely evade from accountability. This network has also engaged in corruption, which came to light when eight data operators filed a case alleging they were being paid a meagre Rs 5050 (66.08 USD) per month, instead of the government-stipulated amount of Rs 14,500 (190 USD). In fact, the Labor Commissionerate of the Assam Government recently slapped a lawsuit on Wipro for not obtaining the mandatory contract labour license for the NRC project.

Most data operators who were recruited in the later stages were not even given any contract. But the neoliberal, xenophobic, Islamophobic state turned a blind eye to such information for the longest time while guiding public discussion towards how Muslim data operators were helping ‘Bangladeshis’ enter into the NRC in return for money.

Last year December, the original NRC petitioner, Assam Public Works (APW), filed a petition at the Supreme Court to sanction a high-level probe into corruption by state authorities. According to one source interviewed by this author, limited verifications were even carried out in Lower Assam’s Barpeta District.

The technological and capitalistic infrastructure around the NRC project is a political site of similar nature, and its politics need to be looked at critically to understand how it contributes to erosion of rights and adds to the anxiety, xenophobia and deaths surrounding the whole process.

Also read ‘The Normalisation of Xenophobia in Assam‘

Just like in the case of the introduction of Electronic Voting Machines (EVM), the technology brings in changes to our behaviour, consciousness and politics. The contracts, softwares, firms, tenders, labour involved are all political devices of this capitalistic infrastructure and have impacted the politics surrounding NRC.

As Susan Leigh Star argues, all infrastructures are experienced relationally. This capitalistic infrastructure around Assam’s NRC, with all its political devices, are also experienced by different people differently. People who have the least political, economic and sociocultural capital are the most vulnerable, largely because this infrastructure is inaccessible and illegible to them.

Hence, the poor, lower caste, women, children, the uneducated, people from Chars (riverine islands in Assam), and other similar vulnerable groups had hardly any idea how the ‘technical-administrative’ part of the NRC worked. This absence of knowledge is the politics of capitalistic infrastructure.

In fact, through my interviews with the people involved with the NRC project it became clear that no one had absolute and complete knowledge of the NRC process, particularly with regard to how all its softwares functioned, the various rules and vocabularies introduced, and the firms engaged.

Thus, capitalistic infrastructure that includes firms like Wipro and ISS need to be seen not in opposition, but as an extension of the discriminatory neoliberal state that is engaging in xenophobic and exclusionary projects like the NRC. This is because such infrastructures are creating their own regimes of data-sharing and handling, turning citizenship into money-minting projects with little accountability, and producing more vulnerable people in the process, be it in the form of contract labourers or stateless subjects.

Bhargabi Das is a PhD Research Candidate at the National University of Ireland, Maynooth, working on imagination of the State in riverine ecologies of Assam.