Home Conflict Strategic Affairs Why India Must Take a Leading Role in Securing the Indian Ocean... 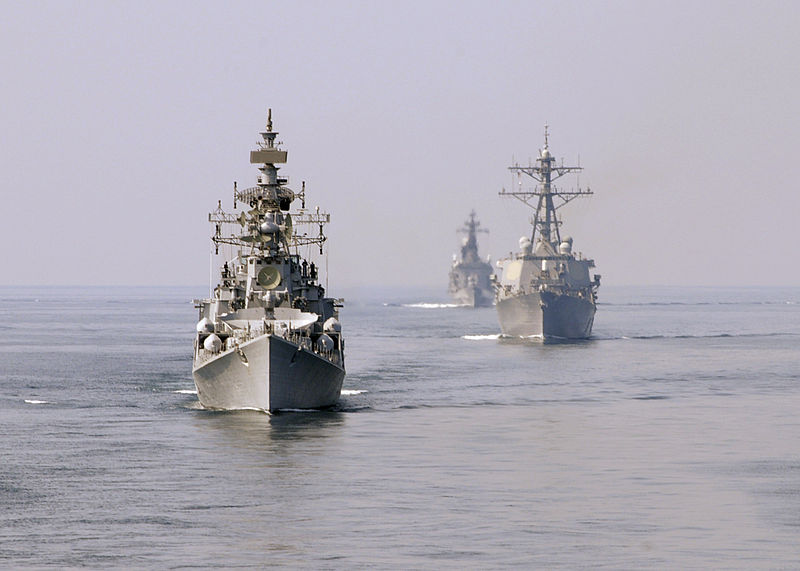 It is often claimed that India aspires to become the leading power in what is known as the Indian Ocean Region (IOR). As expressed by politicians, military figures and the wider elite, these aspirations have developed progressively.

The IOR is the most densely populated region within the world, containing one-third of the global population. The Indian Ocean is the third largest. This region is endued with vast reserves of natural resources. Over the last few decades, the IOR has witnessed a dramatic shift at both the economic and strategic level. An array of new major powers possessing immense potential to influence international affairs with their rising economy have made forays into the region.

Though India’s relation with neighbours are not entirely stable, it has been making friendly overtures through the Neighbourhood First Policy (NFP) and SAGAR (Security and Growth for All in the Region). As noted by former ambassador Achal Gupta, “the constituent countries — individually as well as collectively — represent a world of historical linkages, shared legacies, commonalities and diversities, which are elaborately reflected in their respective ethnic, linguistic, religious and political fabric.”

India is already engaged in a host of projects across the IOR. For instance, it is developing an LNG terminal, a water supply project and container terminals in Sri Lanka’s Colombo and Trincomalee ports. There are also other community projects worth Rs 250 crore that are in various stages of completion, in collaboration with Japan.

India’s outreach in the IOR must be seen in the context of a larger Indo-Pacific framework, which includes complementing SAGAR and NFP with the Act East Policy (AEP, an upgraded iteration of India’s Look East Policy).  New Delhi is cooperating with Japan, the US and Australia in the IOR and beyond by finding common interests in the region, such as freedom of navigation and overflight, freedom of commerce, securing sea lines of communication (SLOCs), counterterrorism, anti-piracy operations, and balancing China’s maritime presence in the region.

Apart from engaging in joint naval exercises with partner countries – AUSINDEX with Australia, Exercise Malabar with the US and Japan, and JIMEX with Japan – India has also been active in consulting these nations within the Quadrilateral Security Dialogue (Quad) framework. Further, India also participates in naval exercises with other regional and extra-regional partners – Varuna with France and Samudra Shakti with Indonesia, among others.

India’s role as a dominant power in the IOR compels it to take up a maritime leadership role in the region, especially when Japan and Australia haves limited presence in the IOR. In this regard, India’s access to naval bases in Mauritius, the Maldives, Seychelles, Singapore and Djibouti is crucial.

In the Maldives, two India-sponsored projects pertaining to the coastal surveillance radar and the Composite Training Centre for Maldives National Defence Force are being undertaken. With the help of Singapore, the Indian Navy has permanently deployed a frontline warship at the mouth of the Malacca Strait to keep an eye on the increasing Chinese movements in the Indian Ocean as part of its mission-based deployment. India has also sought to augment its maritime security interests through cooperation with some of the countries in the IOR.

In Mauritius, it is engaged in upgradation of facilities in the Agalega islands, and has been trying to enhance its security cooperation dialogue with Seychelles and Djibouti. India faces the impact of the current tensions between the US and Iran in the Strait of Hormuz, as it depends heavily on the region for its oil and gas supplies. Indian Naval ships are deployed in the Gulf of Aden for anti-piracy missions. Specifically, naval access at Djibouti — which was possible after India’s recent logistics pact with France — and Singapore are crucial given their proximity to their respective choke points, that is, Gulf of Aden and Malacca Strait.

India has deployed fifty of its ships on ‘Mission Based Deployment’ in the IOR, including in the Malacca Strait, to conduct surveillance through network-centric operations that allow every ship to receive and examine feed in a coordinated manner, thus improving the Indian Navy’s maritime domain awareness. Importantly, in April 2018, it was reported that Indian Navy’s deployment in Malacca spotted Chinese naval ships heading to the Gulf of Aden from Ombai Wetar in Indonesia for anti-piracy missions.

Beginning 2017, the Indian Navy deploying warships aimed at countering Beijing’s bulging presence in the Indian Ocean. According to reports, under the new plan, 14-15 mission ready warships are deployed across multiple regions, including the Malacca Strait and Andaman Sea; North Andaman Sea and Bay of Bengal, Lakshadweep islands and Maldives; Madagascar; the Persian Gulf and the Arabian Sea.

For security purposes, India has deployed a total of 15 war vessels — including top-of-the-line destroyers, frigates, corvettes and large patrol vessels — all of which now patrol seven areas of the waters around India beyond the country’s Exclusive Economic Zones, keeping an eye on all entry and exit routes to and from the Indian Ocean. This includes the important SLOCs and ‘choke points’ in the Indian Ocean, from the Persian Gulf and Gulf of Aden to the Malacca and Sunda Straits.

As pointed out by Abhijit Singh, senior fellow at Observer Research Foundation (ORF), “the Navy proudly claims” that these are “tasked ’round the clock, round the year’, and are supported by naval satellite Rukmini (GSAT-7), as well as daily sorties by Poseidon P-8I maritime patrol aircrafts.”

India’s mission operations come handy for its Quad partners as well. India has already signed a Logistics Exchange Memorandum of Agreement (LEMOA) with the US, and is about to finalise similar agreements with Australia and Japan in the near future.

India’s increasing naval accesses and cooperation with Japan, Australia, the US and France must also be seen in the context of increasing naval and geo-economic footprint of China in the IOR through ‘String of Pearls’ and Belt and Road Initiative (BRI). The much-touted BRI includes the China-Pakistan Economic Corridor (CPEC) that passes through Pakistan-Administered Kashmir — over which India claims to have sovereign rights — and ends at the Gwadar at the Arabian coast.

Also read ‘Is India in a Catch 22 Situation in the Indo-Pacific?’

The Malacca Strait in the Eastern Indian Ocean and other choke points in the Western Indian Ocean are crucial for Chinese trade and energy supplies. An estimated 16 million barrels of oil are transported across the Straits of Malacca daily. India also gets over 70 per cent of its oil supplies across the sea routes of the Indian Ocean. India has better leverage compared to China in the IOR and through its dynamic naval strategy, it is seeking to retain its primacy in the area.

Piracy in the Gulf of Aden, Somalian Coast, Omani Coast and the seas between the African coastline and Maldives is a global menace, being fought not only by Indian, but also by other navies. India, on its part, is actively engaged in anti-piracy operations in the Gulf of Aden and the Eastern Arabian Sea. Besides escorting Indian-flagged vessels, ships of other countries have also been provided protection. No ship under Indian escort has thus far been hijacked by pirates.

Organised crime, trafficking and smuggling are increasingly linked to global patterns of violence. Drugs and arms smuggling is rife in much of the Indian Ocean. The sea provides an easy way for international crime syndicates, unscrupulous traders and non-state actors to distribute their wares, or to provide belligerents with highly sophisticated weapons.

So, finally, once may conclude that the IOR holds particular importance for India as the littoral’s most populous country. The IOR is one among the busiest commercial and primary energy supply routes in the world, which makes it even more imperative for India to strengthen its strategic apparatus in the region. The IOR has also been a key determining factor of India’s cultural footprint, with people, religion, goods, and customs spreading from India to Africa, the Southeast Asia, and the Middle East, and vice-versa.

Indeed, for the remainder of the Ocean’s littoral states, and even those outside the region, India’s leadership role is important in determining the region’s strategic future.