Home Politics Resistance With Trump in the White House, the Fight for Racial Justice Gets... 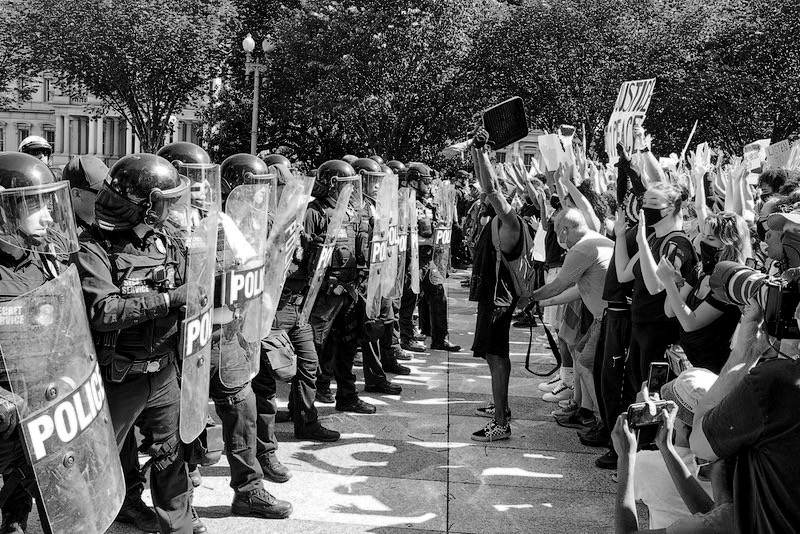 King was lynched to near-death by four white Los Angeles Police Department (LAPD) officers on 3 March 1991 after a high-speed car chase. The incident was filmed by a local resident and the disturbing videotape caused a national stir.

The LA riots were the last time any US President invoked the Insurrection Act and deployed the military to quell a civil unrest. As the violence intensified, President George HW Bush federalised the California Army National Guard and deployed federal troops as part of Operation Garden Plot. Washington DC’s military occupation of the city successfully quietened the unrest.

Before this, regular American boots were deployed domestically on just a few occasions. In the fall of 1957, President Dwight D Eisenhower sent 1000 US Army paratroopers to Little Rock, Arkansas, to escort nine African-American students who wanted to enrol in a high school, following the historic Supreme Court desegregation order three years earlier. The state’s governor had earlier deployed the national guard to stop them from doing so, in open defiance of court orders.

The other deployments also took place during the civil rights movement years, once during the 1962 Ole Miss riots and then again during the 1968 Washington DC riots following Martin Luther King Jr’s assassination.

Thus, by no measure are racial police violence against blacks or riots or internal federal troop deployments out-of-routine in America. What is, however, starkly unique about today’s situation is a certain whitish man occupying the Oval Office (and the bunkers underneath).

This man, Donald Trump, isn’t the usual American President with the political tact that the job ordinarily demands. He isn’t a Harry S Truman, a Dwight D Eisenhower or a Lyndon B Johnson who understood the shifting tides of time and moulded themselves accordingly, despite their personal beliefs.

He isn’t even a George HW Bush who sent the US army into LA to push back rioters, yet had the acumen to call the Rodney King lynching “revolting” in a national televised address two days after the riots erupted.

“I felt anger. I felt pain. I thought, ‘How can I explain this to my grandchildren?” Bush Sr. had said in an emotional 12-minute speech in May 1992.

For an entire week since a white Minnesota cop murdered George Floyd in cold blood, Trump refused to deliver any national address or appear in an exclusive press conference to talk about the incident or the ensuing protests.

Instead, he spent his time in the White House calling the protestors “thugs”, threatening them with gunfire, “vicious dogs” and “ominous weapons”, and asking state governors to “dominate” protests or “look like a bunch of jerks”.

And of course, for a brief while, he shut off the White House lights and hid in the Presidential bunker, as if a foreign enemy was attacking the homeland.

Only on Tuesday, he emerged on to the White House’s Rose Garden to talk about the fires around him.

“All Americans are rightly sickened and revolted by the brutal death of George Floyd. My administration is fully committed that for George and his family, justice will be served. He will not have died in vain,” Trump said, refusing to take questions from reporters.

He told Americans that he is their “President of law and order and an ally of all peaceful protesters”, and vowed to crack down on “professional anarchists, looters, criminals, antifa and others.” He also said he would deploy “thousands and thousands of heavily armed soldiers, military personnel and law enforcement officers” to quell the unrest.

There was, however, no word on reconciliation, equality or racial justice, which could have gone a long way in instilling some faith amongst the agitating masses, particularly African-Americans. But that wasn’t the most revolting part of his monologue.

While Trump went on about defending “the great country and protecting the American people”, military police and law enforcement officers tear gassed protestors who had gathered in Lafayette Park outside the White House.

As Trump wrapped up his 8-minute speech and walked up to the nearby St. John’s Episcopal Church with his aides for a photo-op, it soon became clear what the deal was. Trump, like some bitter monarch, had ordered the streets to be cleared by force for himself.

“We have the greatest country in the world,” Trump said outside the partially-burnt church, while flashing the Bible. It was an absurd sight, to say the least. According to CNN, the charade was aimed at mending some of the bad press that he received over the previous night’s bunker retreat.

The whole thing reminded many of a popular, unattributed American adage:

“When Fascism comes to America, it will be wrapped in the flag and carrying a cross.”

Fortunately, the Washington clergy immediately condemned the Biblical photo-op, accusing the President of using the church as a “prop”. Others across the country followed suit, with the Bishop of the Episcopal Diocese of Central Florida calling it “blasphemy in real time”.

On the same day, Houston police chief, Art Acevedo, appeared on CNN and delivered an unusually stinging rant against the President, asking him to “keep his mouth shut” if he didn’t have anything constructive to say.

What we’re seeing now is extraordinary even by Trump’s own miserable standards. By constantly threatening to deploy federal troops through executive fiat and encouraging states to use force against protestors, he is openly flirting with militaristic authoritarianism while testing the limits of the law.

But by flashing the Bible in front of a church while the country seethes in anger, he is also throwing in a dash of classic Christian conservatism. In the politico-racial context of today’s America, that largely means outreach to white religious conservatives – a key voter base for Trump.

Interestingly, recent surveys have indicated waning support for Trump amongst white evangelical constituencies, assumably over his COVID-19 response. Last month, he ordered state governors to reopen all churches and other places of worship amidst the pandemic – a move that many commentators flagged as evangelical appeasement.

By flashing the Bible in front of a historic Washington DC church, did Trump play another white appeasement trick? One could certainly say so. Whatever it was, the act did nothing to restore calm, and only made the President look like himself – a supremely narcissistic and rudderless guy merrily lost at rough seas.

Trump’s constant bluster, delivered in capslock through his Twitter loudhailer, and the indignant sultanism, conspicuous in his weeklong incognito since Floyd’s murder, has become so unbearable that even his own party members and establishment moderates have started losing it.

“Many of the President’s traditional defenders — from campaign donors to Republicans on Capitol Hill to some in the conservative media — privately grumbled that Trump allowed several days to pass without addressing the nation or making any formal appeals for unity.”

Conservative columnist, George F Will, even called for a complete defeat of not just Trump, but also the entire Republican Party in the upcoming national elections. In his recent column for The Washington Post, Will had something very interesting to say about Trump:

A cursory look at the modern history of US politics makes it amply clear that racism is a bipartisan agenda, spread out thick across the political spectrum. Both the Republicans and Democrats have actively abetted the institutional marginalisation of blacks through the decades, either by omission or commission.

Yet, during and after the Civil Rights Movement, the bipartisan establishment continually attempted to keep black anger in check through a mix of tactful negotiations, smooth-talk, co-option and rosy promises. But by some Satanic intervention, Trump has managed to irk even this lot.

At the risk of sounding hyperbolic, these discontents could foreshadow the first full-fledged political crisis in Capitol Hill under the Trump presidency, particularly as the President spiritedly seeks re-election in the upcoming elections.

Yet, the absence of an establishment moderate at the top could also lead to broader and fiercer civil society resistance. After all, more people would be willing to join the movement to oppose Trump than to oppose someone like a Kennedy or a Johnson.

Today’s activists, unlike their predecessors from the 1960s, won’t have to deal with a politically-expedient, smooth-talking moderate who fights a long, cold war of attrition. Today, they’re faced with a guy who is frothing in the mouth with boiling aggression and unambiguous hatred.

It is easier to mount a resistance to such leaders than to the ambiguous ones, because they pick sides very easily and are predictably tactless. They also tend to shoot at their own feet frequently, making the protestors look more credible than ever before.

And being the brazen provocateur that he is, Trump makes the crisis of equality in America look graver. This is good for popular mobilisation, grievance-building and coalitioning.

In more ways than one, under a Trump presidency, racial justice does become an even more urgent imperative than ever before. It is a glaring window to fix America’s racial malaise once and for all, and deliver justice to not just Floyd, but the entire black community in the country that is gasping for breath.

Angshuman Choudhury is a New Delhi-based commentator and policy researcher, currently working with the Institute of Peace and Conflict Studies (IPCS), New Delhi. He is a former GIBSA Visiting Fellow at the German Institute for International and Security Affairs, Berlin. He tweets @angshuman_ch.