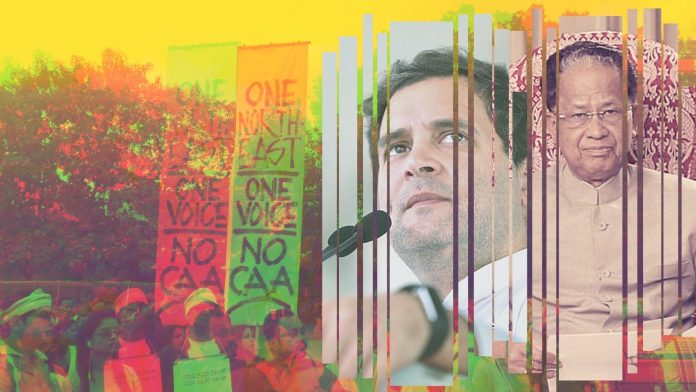 In the present time, three issues are animating politics in Assam.

While demonstrations against the Citizenship Amendment Act (CAA) faintly drag on, speculations about recommendations made in the Report to implement Clause 6 of Assam Accord are beginning to gain much traction. These developments have surfaced in a context rife with the cries, anxieties and allegations over the National Register of Citizens (NRC) updation exercise.

As these issues have moved to the centre stage, fissures within Assam’s principal opposition party, the Indian National Congress, on the question of NRC, CAA and Clause 6 have also come to the fore. Such differences are seen in the contradictory positions taken by the party on these issues at the national and provincial level, between the party unit in Brahmaputra and Barak valley, and also at an interpersonal level among senior leaders.

At a time when the Congress party is rapidly losing ground across the country, including Assam, such dilly-dallying further erodes its credibility in the eyes of an electorate, which on the other hand has the option of choosing a certain party that seems to be extremely confident about its ideology.

As nationwide protests against the NRC and CAA raged on, the Congress party could be seen voicing its opposition against both. National leaders of the party have been frequently speaking of the undesirability of a nationwide citizenship register like in Assam. The party’s High Command has directed Congress-led state governments to pass resolutions against the citizenship amendment legislation.

But curiously, the strong opposition of the Congress party to the NRC dilutes into an enthusiastic endorsement of the exercise carried out in Assam. Leaders of Assam Congress are now often found using a strong anti-immigrant rhetoric and unhesitatingly take credit for initiating the updating exercise, with former Chief Minister Tarun Gogoi even claiming that the NRC is his ‘baby’.

Party leaders have often sought to rationalise this deviation by talking about the specificity of Assam’s so-called ‘immigration problem’. The strength of such kind of arguments to justify an exception in the party position is deeply questionable.

People across the country are protesting against a nationwide NRC, because in the final instance, the exercise is grounded on a majoritarian and anti-plural logic that strives to structure homogenous social identities. This is true not only for other regions of India, but as much for Assam where demands for the NRC was rooted in the cultural anxieties of the dominant Assamese-speaking community.

Opposing the nationwide NRC without disapproving the exercise in Assam as such, point towards a distressingly instrumental attitude that the party has towards serious issues.

Also read ‘Reading Proof as ‘Proofs’: The Search For The Elusive Bangladeshi in Assam’

But, this is not the only point of difference in the party regarding the NRC. The Assam Congress is also divided on the NRC’s cut-off year. While both the State Party President and Congress Legislative Party (CLP) leader accept that only the individuals living in Assam upto 24 March 1971 should be included in the NRC, Tarun Gogoi has been demanding the inclusion of all names that are part of the 2014 electoral list.

Neither the All India Congress Committee (AICC) nor the Assam Congress has, however, made any proper effort to reconcile these divergent positions. The party has rather chosen to function through these ambiguities, hoping perhaps to gain political mileage by appealing differently to different social constituencies.

In fact, the Assam Congress went into the 2019 General Elections by projecting two positions on the Citizenship Amendment Bill 2016. In the Brahmaputra Valley, party leaders articulated their opposition to the Citizenship Amendment Bill 2016, which was the de jure position, while leaders in Barak Valley, with a predominantly Bengali population, openly demonstrated their support for the amendment legislation.

There is also a difference in the raison d’être of opposing the CAA between the AICC and the Assam Congress. The party’s central leadership disapproves CAA on grounds that the Act discriminates among persecuted communities on the basis of their religion. Abhishek M. Singhvi, national spokesperson, has clarified that the party is not against granting of citizenship to persecuted Hindus, but opposes the denial of similar rights to persecuted minorities in countries like Sri Lanka, Nepal and Myanmar.

But, the Assam Congress opposes CAA because it would confer citizenship rights to Hindu Bengalis among others, which it fears would threaten Assamese identity. There is a broad difference between both these grounds of opposition and translate into very different political worldviews that are incompatible with each other. But, here again, the party is yet to clarify which line of opposition it endorses and which it considers to be the aberration.

Differences over Clause 6 of Assam Accord

Alongside these issues, the Congress party also seems to be divided over the desirability of constitutional, legal and administrative safeguards for the Assamese people. In its presentation to the Committee for implementing Clause 6 of Assam Accord, the Assam Congress has formally backed proposals for having such safeguards.

But the proposed move has been vehemently criticised by AICC leader and the party’s face in Barak Valley, Sushmita Dev, who considers such safeguards to be a means of disempowering Bengalis living in Assam.

So what explains these inconsistencies on these critical issues?

To some extent, the Congress’ contradictory stances on NRC, CAA and Clause 6 could be seen as the natural outcome of a party apparatus that has become deeply factional. At a time when both the central and state leadership have become significantly weak to enforce its line, the different factions within the party function with much autonomy and frequently override formal positions on issues according to local political expedience.

But this is only one part of the explanation, for these inconsistencies are also indicative of a more fundamental shift that the Assam Congress is currently undergoing.

Until the first few decades of Independence, leadership and policy of the Assam Congress predominantly represented the interests and anxieties of the caste Hindu Assamese. As the party came under the grip of leaders like Dev Kant Barooah, Fakiruddin Ali Ahmed and Moinul Haque Choudhury, public perception began to change and the Assam Congress gradually began to lose the caste Hindu Assamese popular base – first to the Janata Party, then to the Asom Gana Parishad (AGP), and finally to the Bharatiya Janata Party (BJP).

At this moment, when the ruling coalition in Assam is facing the flak of the people for bringing in the CAA, and the Assamese civil society led by different pressure groups are on the ground protesting against it, many in the Congress party see the situation as an opportunity to rebuild its base among the caste Hindu Assamese. Leaders of the Assam Congress are beginning to adopt a strong ethno-nationalist posture, hoping to make inroads into this social constituency.

The strong anti-immigrant rhetoric endorsing the NRC, opposing the grant of citizenship rights to persecuted minorities on the pretext of preserving indigenous identity, and enthusiastic support for the government’s decision to provide safeguards to the Assamese all point towards this. However, at a time when the Assam Congress has already lost significant support of the tribals, ethnic and linguistic minorities, the salience of such a strategy is questionable and could only further shrink the heterogeneous popular base of the party.

Abhinav Borbora is a Guwahati-based political commentator and writer. He can be contacted at abhinav92ac@outlook.com.