Home Politics The Hagia Sophia Reconversion Is a Cynical Undoing of What Turkey Used... 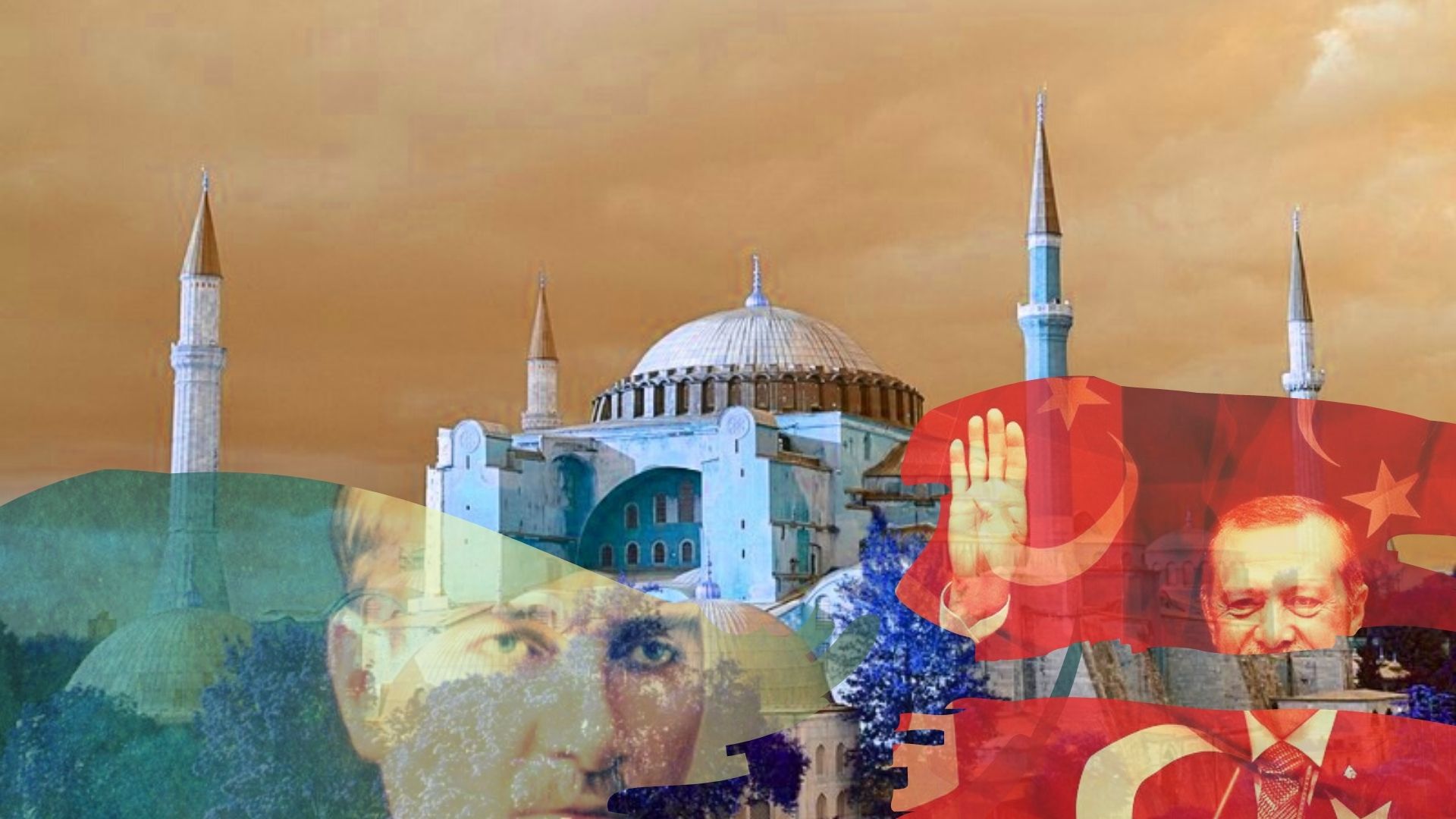 “O Solomon, I have surpassed thee!”

This statement by Roman Emperor Justinian-I, who consecrated the monumental Church of Holy Wisdom (Hagia Sophia) in Constantinople (modern Istanbul) in the sixth century AD, perfectly delineates the nonpareil spectacle that the majestic 65,000-square-foot stone edifice is.

Initially built as a Byzantine cathedral, the hallowed premises has changed hands and religious identities several times — from being at the centre of Christendom for nearly a millennium, and later, a Mosque following the Ottoman conquest in 1453. It was converted to a Museum in 1934 by way of a decree by Mustafa Kemal Atatürk, the founder of the Turkish Republic.

Ergo, the building complex is not only symbolic of magnificent architecture and cultural diffusion, but also that of Muslim-Christian rivalry and iconoclasm. Recently, moments after a top Turkish Court annulled the 1934 Cabinet decree that turned the Hagia Sophia to a museum, President Recep Tayyip Erdoğan issued a decree ordering the building complex to be opened for Muslim prayers — a move that is being seen as an act of cultural cleansing by critics and political rivals who have also questioned its timing.

Istanbul (formerly Constantinople) is integral for the world as well as the Turkish psyche. It is the only city in the world that sprawls across two continents. It is a microcosm of the country as a whole. President Erdoğan, who is wholly conscious of the colossal significance of the metropolis, is believed to have reportedly, during the 2017 mayoral polls, said: “If we lose Istanbul, we lose Turkey.”

The very essence of Istanbul lies in its monuments and artefacts whose troubled history has yielded cultural diffusion and religious tolerance. Founded in 330 A.D. by Roman Emperor Constantine, the city has strategic importance by virtue of it being located on the Bosporus Strait, covering the entire area of the Golden Horn, a natural harbour.

The first church on the disputed site was built by his Constantine’s son and was known as the Magna Ecclesia (literally, ‘The Great Church’), a name which is perhaps adequately descriptive of the majestic grandeur of the Basilica. It was where the patriarch conducted the services that were attended by the Emperor and Empress, along with the local populace.

The current structure was dedicated as an expression of might and piety by Emperor Justinian-I in 537 A.D. who, true to his Roman antecedents, sought to expand the original structure on an unprecedented scale. For nearly 1000 years, it was the largest cathedral in the world until the iconic city was conquered by the Ottoman Turks in the 15th century, who set about converting the sanctified site into a mosque.

So as to commemorate the depths of its history, Atatürk converted Hagia Sophia into a museum and a monument of universal legacy. These paroxysmal acts of the past not only earned Istanbul, the status of a preeminent global tourist destination, but also that of a land where multiple cultures and faiths intersect.

In 2019, Erdoğan’s Justice and Development Party (AKP) lost power in several major Turkish cities, including Istanbul, which had otherwise been its stronghold for nearly twenty five years. Erdoğan’s recent decisions, including the reconversion of Hagia Sofia into a mosque, seem to be motivated by the desire to avenge his electoral loss. At best, they are meant to consolidate his own position and popularity, which appear to be severely threatened in light of the growing discontent against his authoritarian regime.

What is certain is the fact that Erdoğan, by stoking the popular, yet hitherto dormant, radical Islamist sentiments, has managed to undermine the country’s short lived secularist traditions. The particular Hagia Sofia reconversion act of the beleaguered autocrat is, in his own personal opinion, aimed at reclaiming Turkish Sovereignty from the clutches of modernism and ‘forced’ top-down westernisation.

One of the first biographers of Atatürk, H.C. Armstrong, in his controversial account of the Turkish leader titled Grey Wolf, Mustafa Kemal: An Intimate study of the Dictator, had once remarked that he was a dictator in order that “it may be impossible ever again that there should be in Turkey, a Dictator”.

But any casual observer of Turkey would agree that Erdoğan’s purges in the recent past make him the most dictatorial leader to head the country after Atatürk. Erdoğan, who claimed to uphold Ataturk’s legacy, has made little secret of his distaste for the latter’s staunch secularism and his inclinations that tended towards liberalism and democracy.

The shrewd politician that he is, Erdoğan was successful in out-manoeuvring the plotters of a dead coup against him in 2016. Since then, he has come down heavily on almost all autonomous institutions of the country, fiercely determined to clamp down on his domestic adversaries – military, media and the judiciary – which have often challenged his administration over its record on several issues, including human rights and separation of powers.

In 2017, Erdoğan won a controversial referendum, which enabled him to change the Constitution to an Executive Presidency. Following a ‘demonise-and-polarise’ strategy, he has propelled and asserted his own brand of politics – abandoning inclusive politics in favour of exclusionary narratives, which have further hastened the polarisation of Turkey along conservative-religious lines. Apart from this, a botched accession to the European Union and plans for demographic engineering in the region are a sure recipe for disaster.

The existing secular and religious tensions, accelerated suppression of minority rights (especially those of secular Kemalists, Gulenist grass-roots families, Sunnis, Kurds and Alevis), curb on civil liberties, state control of media conglomerates, initiation of Constitutional reforms so as to strengthen the institution of the President, policy decisions aimed at usurping judicial powers are just a few exemplars from recent times that are emblematic of the fading democratic traditions of Turkey.

Lack of a credible opposition has further precipitated the issue. With Erdoğan in the driving seat, democratic competition and tolerance are headed for further setbacks, and Turkey’s free society, as a result of oppressive policies of the autocrat, is fast disappearing into a sarcophagus.

The 1963 Ankara Agreement, aimed at strengthening economic and trade relations between the member states of the EU and Turkey, was a path-breaking development as it not only opened the doors of the European market to Turkey, but also gave flight to Ankara’s ambitions to join one of the most formidable alliances in international economy. The road to accession has, however, not been easy.

Turkey’s candidature to the EU was confirmed at the 1999 Helsinki Summit. Formal accession negotiations began in 2005, but the progress has been painfully slow, with only 14 of the 33 Chapters of the Acquis that require negations have been opened (the last one in November 2013) and just one provisionally closed. Turkey, just like any candidate in line to join the EU, was required to satisfy a set of values and norms, formally known as the Copenhagen Criteria, that are sine qua non for the membership.

The same necessitates democratisation of the political regime, liberalisation of state-society relations, rule of law, respect and protection of human and minority rights – basically everything that is opposite to the prevailing political order in Turkey. Also perceptible is the fact that under Erdoğan, Turkey was initially on a path to get in shape, so as to secure the EU membership by pioneering radical legal and societal overhauls.

But now, in a twist of historical irony, extreme Islamism and cronyism have come to dominate public life. Turkey seems to be sitting down to a banquet of consequences, thanks to the reckless acts of the imperious tyrant.

Undoing of a legacy

Democracy is an arduous journey – a complex of norms, values and institutions, and insufficiency in any domain have the effect of disqualifying it. It can never be a la carte or a la Erdoğan. The Turkish President’s stentorian nationalism, with a tinge of staunch religiosity, is the hallmark of his politics, and it certainly falls afoul of democratic principles.

The veteran is yet to realise that the infusion of religion into politics spawns sinister connotations. For Erdoğan, who claims to be a legitimate successor to Atatürk’s bequest (which sought to liberate Turkey from its Ottoman cultural moorings by touting it as a model of secularism in the Muslim world), his grand vision is largely centred around restoring the country’s power and influence to that of the Ottoman Empire.

Seventeen years into his rule, Erdoğan seems to ride roughshod over postmodern multiculturalism and secularity that were once revered for being the founding ideals of the country.

Akriti Sharma is a student of law at the University Institute of Legal Studies, Panjab University, Chandigarh. She has a keen interest in international relations, defence and security issues.