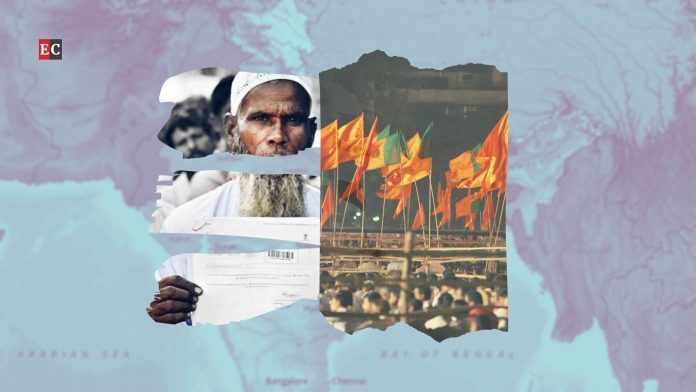 Gripped with allegations of sexual harassment and his questionable role in Assam’s National Register of Citizens (NRC) process, the previous Chief Justice of India, Ranjan Gogoi, was the centre-point of the Ayodhya verdict a year ago.

A year after, on the anniversary of the verdict, it became clear that we have become an economy and society that Kautilya envisaged in Arthasastra. Among many in India, the politics of Hindutva has established with some authority that tolerance and freedom are futile categories.

Kautilya’s writings, as Amartya Sen noted in a lecture titled Human Rights and Asian Values, are often cited to show that freedom and tolerance were not valued in the classical Indian tradition. In Arthasastra, Sen says, liberty is only reserved for the upper classes.

Seemingly, they have managed to successfully cement the idea that anything is legitimate if it is done for the benefit and safety of the Hindus. We can only look at our past and to the future with sufficient horror.

The verdict was celebrated then by Hindutva supporters and even after a year, the thrill isn’t gone for the dominant groups and the ruling class. From Amul India to Sashi Tharoor, the thrill is visible everywhere and that is some range. Here, one is a witness to a kind of filial benevolence that the ruling classes extend to the state and the dominant ideology with disturbing regularity.

Such filial devotion is also seen from the mainstream media in India in its solidarity towards the ruling party. In Europe, and almost everywhere today, we see that the media largely mirrors the middle-class sentiments. This class of people are the major consumers of popular culture.

The Hindu middle class in India forms the larger chunk of the support base of the current ruling party, making anti-minority sentiments a popular commodity. The same media ties the sacred thread of such culture that the middle class aspires and extends their solidarity to its politics by manufacturing propaganda news that benefits the ruling party.

Thus, the kind of popular culture we have inherited receives the scared stamp of the mainstream media. When the desires and dreams of the state, ruling class and media compliment each other, the filial devotion grows stronger. Based on its commitment to the ruling party, the media enjoys a ritualistic sanctity among the supporters of Hindutva.

There is an uncanny similarity between the reaction of Indian National Congress and the Communist Party of India (Marxist) to the Ayodhya issue on one hand, and how the Assamese middle class and the civil society behaved after the verdict last year on the other.

The sentiments were high in Assam, for former Chief Justice of India, Gogoi, an Assamese, was involved. The regional media and larger civil society hailed him for amicably resolving the matter in the regional media. Such political emotions seemed obscene, but not shocking to many of us. Time showed us a year later that the kind of political emotions displayed in Assamese public sphere was not an aberration.

The responses surrounding Ayodhya tell us that its supporters have perfected cultural doping. ‘Cultural dope’ as a concept had its own grammar, as Simon Grafinkel theorised, to think about our everyday life in what he would go on to call as ‘ethnomethodology’. Grafinkle, in his book Studies in Ethnomethodology, explains that ‘cultural dopes’ as those persons who ‘produce the stable features of the society by acting in compliance with preestablished and legitimate alternatives of action that the common culture provides.’

The draconian Armed Forces Special Powers Act (AFSPA) is an exception that is applied to regions such as Kashmir and Northeast India. What makes it an exception?

The selective application of this Act to specific locals within India makes it an exceptional practice of the Indian state on the people and region where it is applied. The experiences of AFSPA shows us that making an exception to a politics or a region can be hurtful and ridden with violence. I have personally seen the violence that comes with that exception having lived in a region in Assam that was the hotbed of insurgency and counterinsurgency operations.

This is not to take away in any way the injustice meted out to the region and its people in itself by structures such as AFSPA or other forms of state-making in the region. However, the fact remains that any kind of exceptions made to such nationalisms only gives space to cultural dopers to justify the dominant class.

Commentators and activists such as Yogendra Yadav and Shekhar Gupta have maintained their exception to a process such as Assam’s NRC and the solidarity towards little nationalisms in the Northeast. Their support towards nationalism stands in stark contrast to their hardline approach towards Hindu Nationalism.

Is such a position a result of their myopia, selective amnesia or are they cultural dopers too?

Also read ‘The Myth of ‘Secular’ Anti-CAA Protests in Assam’

Cultural dopers, for me, are those individuals who reproduce the dogmatic and popular perceptions of society that are always aligned with the ruling class and caste. They cannot be a true ally in the fight to establish human freedom and dignity. They seek to create a homogenous society by destroying the multiple ways of relating and belonging in a community, neighborhood, society, or nation. The actors who are devoted in producing the ‘stable features’, in turn, maintain the oppressive, violent and humiliating practices, such as the Indian caste system.

Cultural dopers are also those who are strongly anti-immigrant and racist in their outlook. In the case of Assam or with Hindu fanatics, we see that the perpetrators enjoy impunity from both the law and society. The perpetrators of beef lynchings in India are a case in point here. In such a milieu, the public sphere becomes so narrow and suffocated that the most basic of cultural expression becomes unthinkable.

Cultural dopers are also individuals who share historic amnesia towards violence committed by its cultural community on its minorities. With the Ram Mandir ‘Bhoomi Pujan’ (ground-breaking ceremony) on 5 August 2020, we saw that people have forgotten about the vandalism and violence of the Ram Janmabhoomi movement, in much similar fashion how the excesses carried out in the name of Assam movement, like the Nellie massacre of 1983, are erased from public memory.

Such amnesia is nothing but a dressing on obscene nationalisms of a variety.

Seemingly, cultural dopers find the support of the intellectuals and the larger civil society who lend their intellectual support to narrow nationalism, as we see in the case of Assam or to the idea of a Hindu rashtra (nation). Any kind of narrow nationalism is obscene and there is no soft or hard xenophobe, racist, sexist or a fascist. In every nature and form of their existence, the horror is always felt, and it degrades our beings and a possibility of sharing this world with love and respect with others. All of it only further amplifies with time.

Cultural dopers at once uphold the narrow visions of the society and the interests of the ruling class and caste. They are the ones who uphold ‘the other’ as the category to be hated and weeded out. However, the irony remains, as Alain Badiou reminds us, that we can only be free if we recognise the freedom of the other. Cultural dopers are masters who are never free and thus, lack an amplitude for love and freedom.

They are messengers and gatekeepers of the dominant culture.