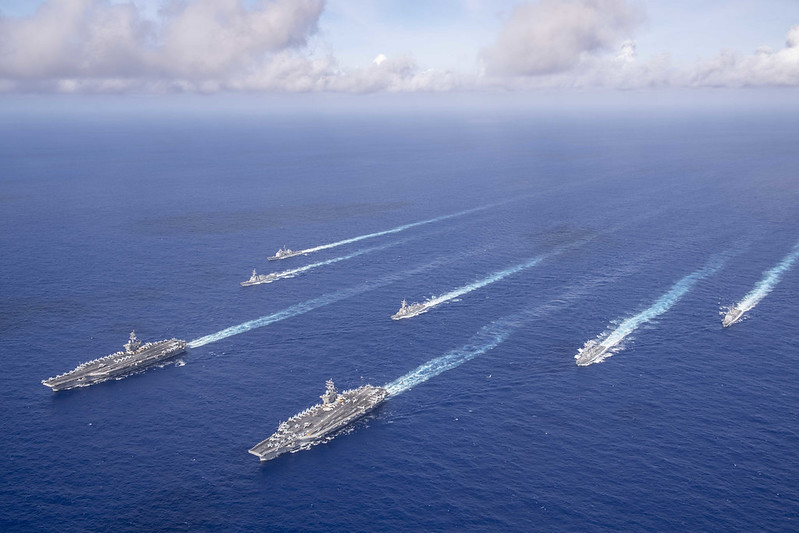 Day by day, the US–China confrontation is heating up. The trajectory now appears irreversible. The nations of the Indo-Pacific, Japan included, are sandwiched between the United States and China. It is high time for them to consider strengthening effective regional cooperation by building on ASEAN-centred processes.

The key players are Japan, Australia, India and South Korea, which could be called a ‘middle power quad’ (MPQ). Souring Japan–South Korea relations could be subsumed in the regional cooperation an MPQ grouping would create. If realised, the grouping could become a step towards creating a larger ASEAN–MPQ framework.

China’s recent behaviour signals its resolute determination to ‘recover’ its traditional sphere of influence in Asia and beyond. The enactment of the Hong Kong national security law virtually ends Hong Kong’s political autonomy and democracy. Many worry about its tacit but intrinsic implications for Beijing’s Taiwan policy, with worries compounded by the build-up of Chinese anti-access and area-denial capabilities against US military intervention in the East China Sea and the Western Pacific.

The United States sees Chinese assertiveness as a challenge to US primacy in the Indo-Pacific as well as a danger to democratic institutions and values. The pandemic further complicates the bilateral relationship and accelerates the rivalry between the two countries.

Left unattended, deteriorating US–China relations will have a two-fold impact on the future regional order in the Indo-Pacific.

First, the space for independent action of countries in the region will continue to shrink as confrontation intensifies. Second, COVID-19 has caused many countries to tighten border controls and take unilateral action to cope with the spread of the virus, discouraging them from thinking and acting regionally. As a result, countries are being forced into choosing sides.

Revitalised multilateral cooperation is needed to avoid these countries losing autonomy. Many in Japan consider the Free and Open Indo-Pacific (FOIP) strategy a means of achieving this. The FOIP concept, as advocated by Japanese Prime Minister Shinzo Abe, is considered a counterweight against Beijing’s Belt and Road Initiative.

Yet in mid-2018 the Abe administration stopped calling this initiative a ‘strategy’ and instead labelled it a ‘vision’. This coincided with Abe’s official visit to China in October 2018 — the first in seven years by a Japanese prime minister. Abe met President Xi Jinping and Premier Li Keqiang, confirming the bilateral relationship was back to normal. Xi’s proposed state visit to Japan has since become an important item on the agenda to strengthen relations, though the visit has been postponed due to COVID-19.

Also read ‘COVID-19 Shows Only Multilateralism Can Save the World’

The Japanese vision of a FOIP has now become a rebranded version of long-held regional policies since the end of the Cold War, including re-affirmation of ASEAN-centred processes and institutions. ASEAN itself adopted an ‘ASEAN Outlook on the Indo-Pacific’ in June 2019 and declared that the ‘ASEAN way’ is still effective in managing Indo-Pacific cooperation.

Key elements of the ASEAN way are institutions such as the ASEAN Regional Forum, established in 1994, ASEAN+3 since 1997, the East Asia Summit created in 2005, and the ASEAN Defence Ministers’ Meeting-Plus, held since 2010.

But the ASEAN way is a double-edged sword under intensifying US–China rivalry.

Inclusiveness is an important precondition for cooperative security but ASEAN could equally become a venue for big powers to control smaller members. Differing ASEAN member state attitudes toward China and the United States are said to have already weakened the group’s institutional solidarity.

The new approach proposed here is to create a framework of regional security cooperation that excludes both the United States and China.

Before involving the two superpowers, the long-standing ASEAN way needs to be reinforced by greater engagement with non-ASEAN countries such as Japan, Australia, India and South Korea—most of whom have increased cooperation with one another in recent years.

If Japan–South Korea relations were improved by a similar security agreement, then a trilateral arrangement that involved Australia would be conceivable. According to a former South Korean official, Seoul studied the 2007 Japan–Australia declaration before making a statement on security cooperation with Canberra in 2009. The contents of the two documents are quite similar — they mostly concern non-traditional security cooperation in such areas as international peace and disaster relief operations.

Japan and Australia concluded an Acquisition and Cross-Servicing Agreement (ACSA) — which would permit the exchange of the most common types of military support, including fuel, transportation, ammunition and equipment between the two militaries — in May 2010 that was revised and upgraded in January 2017. Japan and India started talks on a bilateral ACSA in late 2019.

In the end, the prospect of realising the MPQ and eventually ASEAN–MPQ cooperation depends on sound strategic thinking and political leadership. This is easier said than done, but the alternative is a loss of autonomy for Indo-Pacific countries in the US–China confrontation.

This article was originally published in East Asia Forum and has been republished here under a Creative Commons license.

is Professor Emeritus of Political Science and International Relations at the Faculty of Law, Keio University.