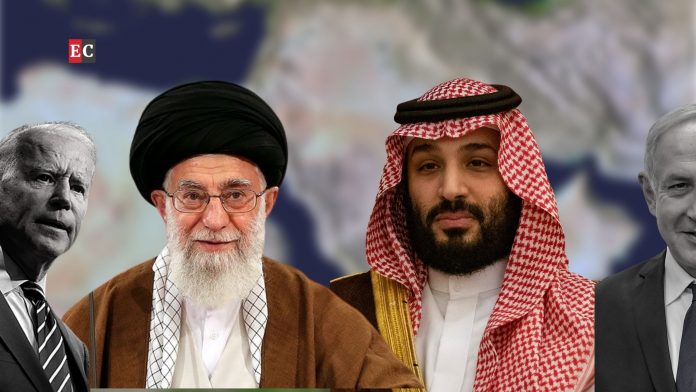 In recent months, Saudi Arabia and Iran have been working towards improving their bilateral relationship. Ties between both have steadily deteriorated in recent years since they snapped all diplomatic relations in 2016.

Officials from both countries held talks in the month of April in Baghdad, and some important progress seems to have been made with Iran in the latest round of discussions held in the first week of May. Tehran appears to have asked Riyadh to help sell its oil, and circumvent American sanctions in lieu of limiting Houthi attacks on the Kingdom’s oil facilities. The important aspect is that neither side has denied that talks are taking place.

Recently, Iranian foreign minister, Javad Zarif, also made the point that better ties between Iran and Saudi Arabia were essential for regional security. Tehran has also not denied that it is engaged in talks with Riyadh.

The US has been cautious in its response to the attempts being made by both countries to ease tensions. An official in the Joe Biden administration, while commenting on the same, said:

“It is the goal of the United States to de-escalate tensions in the region, and we feel that all parties speaking with each other is a positive step in that effort.”

A better relationship between Saudi Arabia and Iran will make revival of the Iran nuclear agreement (or JCPOA) far easier. Saudi Arabia has repeatedly stated that it should be kept in the loop, and the Biden administration has been reaching out to Riyadh and other GCC countries in recent weeks.

At the same time, it is believed that the US is not completely happy with the talks between Iran and Saudi Arabia, since these are being held independently of Washington DC.

Saudi Arabia has been reaching out not just to Iran, but has Qatar and Turkey with a view towards reducing frictions. The Turkish foreign minister, Mevlut Cavusoglu, was in Saudi Arabia recently to fix ties, in his first visit since the Jamal Khashoggi murder in 2018.

One of the reasons cited for this is the change in tone and tenor of US on Saudi Arabia under President Biden. Recently, the Biden administration withdrew support for the Saudi effort in Yemen, and did not shy away from bringing out a report, which clearly pointed to the involvement of MBS in the murder of Khashoggi.

Iran’s outreach towards Saudi Arabia and recently towards the United Arab Emirates (UAE) is driven not merely by the realisation that for the revival of the JCPOA, Gulf Cooperation Council (GCC) countries have to be on board, but also that it is not isolated in the Middle East.

While there is a churn taking place as far as ties between GCC countries and Israel are concerned, it remains to be seen as to whether Israel will support the revival of the JCPOA. So far, it has opposed the deal, saying that it is does not address Israel’s important security concerns over Iran, a point conveyed during meetings between senior Israeli and American officials.

The Biden administration has taken a strong posture on Riyadh, but it is unlikely to do so regarding Israel due to a bi-partisan consensus in support of Israel and pressure from various lobbies within the US.

While commenting on the recent violent escalation between Israel and Hamas, the US President has said that Israel has the right to ‘defend itself’. A White House read-out of a call between Biden and Israeli Prime Minister, Benjamin Netanyah, stated that the US President “conveyed his unwavering support for Israel’s security and for Israel’s legitimate right to defend itself and its people, while protecting civilians.”

Biden’s statement in favour of Israel faced fervent criticism from policymakers within his own party. Alexandria Ocasio-Cortez, a Democrat representative from New York, while speaking in the House, said:

“The president and many other figures this week stated that Israel has a right to self defense … But do Palestinians have a right to survive?”

The Republicans, on the other hand, blamed Biden for not being fervent in his support for Israel. Republicans have also been using the recent violence as a pretext for ending negotiations between US and Iran on account of the support lent by Iran to Hamas. In a letter to Biden, 44 Republican senators said:

“the United States should take all steps necessary to hold Tehran accountable and under no circumstances, provide sanctions relief to Iran.”

In conclusion, the efforts being made by Saudi Arabia and Iran are important, not just in the context of the JCPOA, but also the overall geopolitics of the Middle East. But Israel’s obduracy in opposing the JCPOA, and its increasingly belligerent approach (which is not likely to be questioned by the US) mean that not only is the revival of the Iran nuclear agreement likely to be tougher, but the Middle East is in for serious turbulence.