Home Politics Resistance Why #BlackLivesMatter Is Relevant to India: Common History of Discrimination 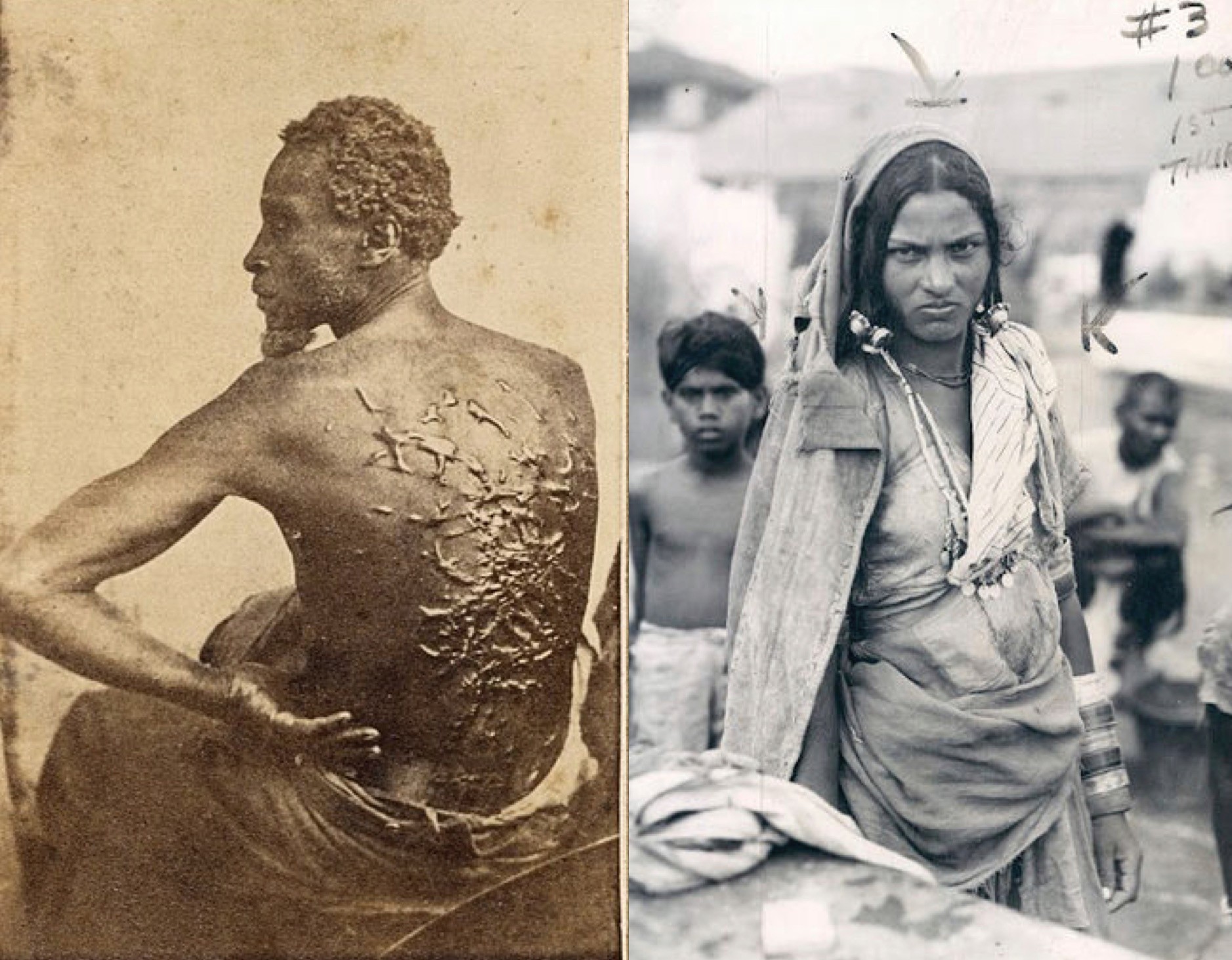 The uproar over the recent murder of George Floyd, a 46-year old African American man, by Derek Chauvin, a 44-year old White Minneapolis police officer, has assumed centre-stage in the United States and other parts of the world, prodding countries to introspect and cleanse their own tainted societies.

It is an opportune moment for us Indians to reflect too. The twin scourges that led to Floyd’s murder and are now being protested against throughout the world are – discrimination (racial) and police brutality. Both of these evils are ubiquitous in India.

This two part series explores the congruences between India and the US on the two common themes – discrimination and police brutality. The first part deals with the former.

The social structure of a country, at a particular point of time, finds its basis in its sui generis culture and history. Thus, the fact that Indian history is saturated with incidents of discrimination and prejudice, reflects, to a certain extent, the present inequities in Indian society.

Indian history endorses a wide magnitude of discrimination that was prevalent in society. The practice of untouchability and the labelling of certain people as “untouchables” in ancient India was one of the most stringent forms of discrimination practiced anywhere in the world. It remains a glaring reality even today.

The mistreatment of selective groups of people was based on more than one grounds. People were looked down upon based on their caste, sex, religion, region, race, ethnicity and their ilk. What can depose the ubiquity of discrimination in ancient Indian society more than the fact that the pièce de résistance of the immensely followed ‘Varna system’ was its inherent discrimination on the basis of the caste they are born into?

A cursory look at Indian history reveals a story of multi-dimensional discrimination and segregation.

The inaccessibility of Dalits to public wells, assigning jobs to people on the basis of their jati (social order), barring the so-called “lower castes” from reading the holy scriptures, the ghettoisation of women within the four walls of the household, the colonial policy of disallowing Indians from being the members of administrative groups, and violence over people belonging to a particular religion, are all testimony to the prolix history of discrimination in India.

The ‘Legal’ Way Out

The timely recognition of discrimination as one of the biggest stumbling blocks to India’s prosperity and stature by the makers of its constitution is laudable. Thanks to their sapience, we have had the right to equality articulated in our ‘grundnorm’ (basic norm) since the formation of India as a Republic in 1950.

This ostensibly put an end to the prolonged reign of discriminatory social practices in our country, threw open the public spaces and employment opportunities to all and sundry, irrespective of their religion, race, caste, sex or place of birth, and defenestrated untouchability making it an offence punishable by law.

Instead of discrimination, India adopted the provision of ‘special discrimination’ (or positive discrimination) in the form of caste-based reservations to bring the systematically-discriminated at par with others. Other anti-discrimination legislations of the country have guaranteed the payment of equal remuneration to men and women alike, granted rights to daughters at par to those granted to sons, and mandated to prevent atrocities against marginalised communities, such as the Scheduled Castes and Scheduled Tribes.

Since we consider the precedents as one of the sources of law, the Supreme Court of India has also been instrumental in setting the anti-discrimination narrative in the country. The landmark judgment of in Navtej Singh Johar v. Union of India whereby Section 377 of IPC was pronounced to be unconstitutional ‘in so far as it criminalises consensual sexual conduct between adults of the same sex’ is a perfect example of the “legal” establishment of toleration and abnegation of prejudice in the Indian experiment with democracy.

The true spirit of democracy does not lie in written words. Instead, it lies in the routine practice of the rule of law. Just as how the Civil Rights Act of 1964, Voting Rights Act of 1965 and Fair Housing Act of 1968, all of which gave full citizenship rights to the Blacks in America, could not prevent the maltreatment and brutality that the community continues to face, Indians too, despite being successful in codifying non-discrimination, have drastically come a cropper in its practice.

There are various reports, which quote India’s miserable position on discrimination prevalent in its society. According to a 2018 study by the International Institute for Applied Systems Analysis published in Lancet Global Health, an average of 239,000 girls under the age of five die each year in India because of their gender.

The norm of ‘equal remuneration for equal work’ still waits for its full application. A survey conducted by the International Labour Organisation in 2018 pointed out the humongous gap between the earnings of men and women in India, as big as 34% in many cases.

Combining the twin facts that a day rarely passes in India without the newspapers carrying the news of a Dalit being killed and that various atrocities or other discriminatory behaviour meted out to Dalits go unreported, one can imagine the quantum of prejudice being faced by them.

According to available data, a crime is committed against Dalits every fifteen minutes and six Dalit women are raped every day. Further, according to National Crime Records Bureau (NCRB) data, not only have anti-Dalit crimes risen by 25 percent over the decade to 2016, the conviction rate for such crimes has also declined substantially.

Another form of discriminatory behaviour that is a clout to the written word is anti-Muslim bigotry. The brutality they face on a daily basis is not hidden from anyone, and neither is their growing sense of alienation. Their faith is constantly likened with terrorist ideologies, further intensifying their alienation.

The recent Citizenship Amendment Act (CAA), which selectively gives impunity from being flagged as ‘illegal immigrants” to only non-Muslim immigrants from Bangladesh, Pakistan and Afghanistan, adds fuel to the fire. It not only makes India renege on its promise of keeping itself open to every religion, but also serves as a blow to the country’s secular credentials that play a critical role in maintaining its soft-power.

Another visible form of discrimination is against people belonging to the LGBTQIA+ community. They are often harassed or bullied in schools and workplaces, forcing many of them to drop out. The International Commission of Jurists has found in its report that ‘educational and training opportunities are often denied to LGBTQ persons due to harassment, bullying and violence.’

Although in 2014, the Supreme Court in NALSA v. India acknowledged transgender people to be a ‘third gender’, affirming that the fundamental rights will be equally applicable to them, the reality is not as pleasant. For instance, the community does not even have access to public toilets, rendering the grant of fundamental rights almost nugatory.

America has always seen people standing against the iniquitous behaviour to black people, but some things are different in the ongoing protests. This time, the protesters are an amalgamation of people from various backgrounds. It is inspiring to see White people carrying #BlackLivesMatter placards and participating in the protests with the same zeal and enthusiasm with which the Blacks are out on streets. And in this, lies the biggest lesson for us.

We Indians must realise that discrimination is the outcome of parochialism and lies in the minds of people. Although law has a pivotal role in rooting it out from society, it is not enough. It does not have the potential of extracting the hatred and bigotry out of people’s minds. Herein comes the role of education.

As cities like Washington DC and London are reviewing their public structures and altering the names of public spaces (like streets) to make them more reflective of the diverse communities in the wake of #BlackLivesMatter protests, India too should review the content of its textbooks and render them more illustrative of accommodation, tolerance and the diversity.

Featured image: A slave in the Baton Rouge Union camp during his medical examination, US, March 1863, WC (left); Dalit or ‘Untouchable’ Woman of Bombay (Mumbai), 1942, WC.