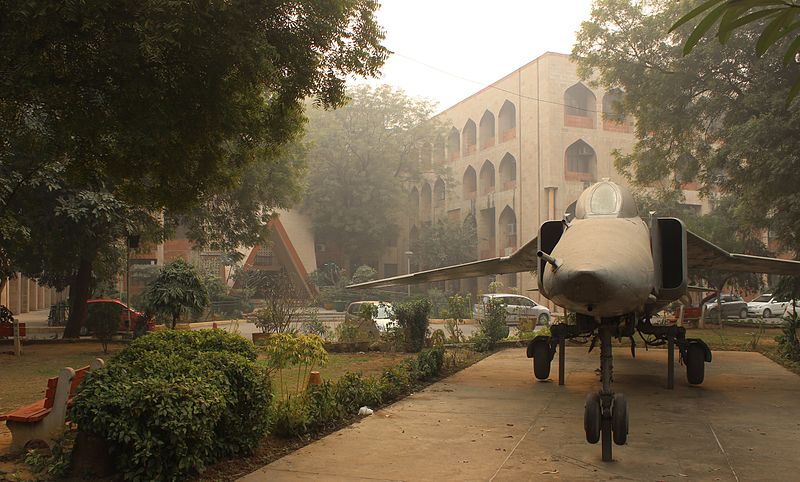 The online conference produced some very shocking discourses on disciplining university students and keeping a check on their behaviour, as this report by The Indian Express suggests. In fact, the press release put out by JMI before the conference and the discussion reported read like some kind of Foucauldian handouts on social control, discipline and surveillance.

As per the JMI press release, the conference was premised on the understanding that universities are mandated to undertake “not just teaching learning activities”, but also “the highly valued task of character formation for the generations to come.”

For long, regulation of students’ “character” has been the bedrock of India’s primary and secondary educational regimes. Schools, through their self-imposed disciplinary norms and ‘moral education’ routines, have attempted to domesticate its students and ‘rectify’ their behaviour. The French philosopher, Michel Foucault, calls it “governance of the self.”

Here too, the idea is to schoolify universities and institutionalise its student communities. But it is also something more than that.

The press release talks about exploring the “pitfall when the focus on knowledge gathering shifts to participation in activities that are non or counterproductive and carried out at the very cost of learning.” Such activities, according to the organisers, contribute to “deviating from the premise with which the student actually entered the temple of learning — the university in the first place.”

With temples, come rituals. And that is precisely the attempt here — to ritualise the university space into a site of mechanical, depoliticised learning. By “non or counterproductive” activities, the JMI administrators and their compatriots mean what they mean — political or ideological activities, such as protests. In the current political context, that denotes anti-BJP campus politics.

Thus, what really lies at the heart of this is an attempt to completely depoliticise the university space and put in place a bureaucratic, socially-reclusive and docile regime of learning. Such a system of education aims to cut off student communities from social and political realities of the world around them, and turn them into mere rote-learners.

The JNU chief proctor, Dhananjay Singh, makes this “hidden” agenda a little more blatant during his remarks. According to him, JNU is becoming a “space to initiate and launch political agendas” and that is a “serious challenge.”

The subtext of this is a no-brainer. The ruling party and its like-minded administrators in JNU detest the university’s dominant Left-liberal student culture (and vice-versa). So the motive here is to neutralise this source of resistance once and for all by criminalising dissenting students, even if they protest peacefully.

Terms like “rowdy elements”, “deviant behaviour”, “problem creators” — which the webinar participants used in copious amounts — become instruments for what Foucault calls “normalising judgment.” First, a certain gold standard of ideal social behaviour is set and then, the “deviants” are weeded out. Eerily, Singh even directly speaks to this idea by proposing that such individuals be “marginalised, segregated and kept out of the campus at any cost.”

What is even more concerning is Singh’s proposition for university administrators to work closely with the police. In fact, the presence of two senior police officers in the meeting itself suggests the central role that hard policing will play in this new disciplinary regime.

“No university campus would like the police to intervene and take over. But we are not capable, as teachers and administrators, to deal with serious law and order situations. So it’s important to have more interactions with the police,” Singh said during the webinar.

This comes nearly eight months after masked goons, reportedly affiliated to right-wing organisations, went on a rampage in JNU, injuring 36 people. The police, at that time, was widely accused of failing to stop the attacks despite being present in the campus.

It was also accused of doing the ruling party’s bidding and going after Left student parties, despite overwhelming evidence of right-wing organisations, like the RSS-linked Akhil Bharatiya Vidyarthi Parishad (ABVP), being involved in the attacks.

So the key issue here isn’t ‘law and order’ in university campuses, but the politicisation of the police force. When the JNU chief proctor, who is a part of the Central government’s administrative apparatus in JNU, talks about “having more interactions with the police”, one wonders if he means creating a safer and more democratic campus for common students or tighter clampdowns on student critics of the ruling party.

In other words, he seems to propose a greater militarisation of the campus to deter political resistance. But this isn’t all.

What the JMI vice-chancellor, Najma Akhtar, said about the police’s role during the webinar is even more startling. While praising the police, Akhtar said that she is “happy to see the role of police has changed drastically in recent years.”

According to her, “before, or after the problem, they are friends of the students” and they “know how to handle (the problem) in a more humanistic way.” Akhtar further said that the police is “no longer feared by students” and are “softer” than before.

There cannot be a more stinging insult to the Jamia students’ community than this. The V-C’s sunny remarks come nine months after Delhi Police barged into the university’s library and brutally assaulted students during an anti-CAA protest.

CCTV footage from the library showed cops in riot gear baton-charging students at random, many of whom appeared to be simply studying, and smashing security cameras before assaulting students. One fact-finding report by PUDR also claimed that the police barred injured students from seeking medical attention. Later that day, Aligarh police launched a similar attack on protesting AMU students, causing grievous injuries.

Thus, for the Jamia V-C to claim that the police are “softer than before” is simply preposterous. It is far detached from the hard reality of growing police violence in India’s universities at the moment.

Notably, one day after the police action in JMI, Akhtar had said that the police entered the campus without her permission and caused “a lot of damage”, including psychological damage. She said this was “not acceptable”. Sadly, Akhtar seems to have forgotten her own words within less than a year.

What is also gravely worrying is a certain proposition in the JMI press release to extend university disciplinary policies to “off campus activities” and “explore the need of reformative mechanism or process” for “errant students”.

Not unlike Jeremy Bentham’s vision of a circular prison or ‘Panopticon’, which Foucault uses in abundance in his own work on surveillance and society, the university administrators seem to be proposing an all-encompassing, non-negotiable and deeply pervasive system of surveillance to keep close watch over dissident student communities.

For a country where universities have served as vibrant sites of debate, discussions and political dissent, this is a terrifying and squarely anti-democratic proposal. The fact that today’s university administrators show such a strong desire to control the lives and thoughts of educated young adults should worry us all.

One of the speakers, BHU chief proctor, OP Rai, went as far as to say that the “new youth is less exposed to scolding and beating” and, hence, there was a “problem in how to handle them.”

His nostalgic liking for corporal punishment is hardly surprising when one looks at India’s schooling system. Teachers thrashing and verbally abusing students is far from uncommon in Indian schools.

With a sharp rise in political authoritarianism backed by violent forces, it is only natural that the impulse to discipline students using force is revived or rejigged in some other form. In fact, the government ordering the police to lathi-charge protesting students must also be seen in this context.

Tuesday’s JMI-organised webinar should be seen as a forewarning of darker things to come. It is a pointed indication of where Indian universities are heading under the ruling regime — to a point where they begin to look like schools with students immersed in their books, without as much a worry about the world around them.

At a time when a new National Education Policy proposes to make education “well-rounded, useful, and fulfilling to the learner”, administrators of India’s top Central universities only want to tame their students.

This article was first published in Firstpost with the title ‘Jamia Millia’s webinar on ‘Discipline in Universities’ suggests control and surveillance will be key part of education in India’, and has been republished here with permission.