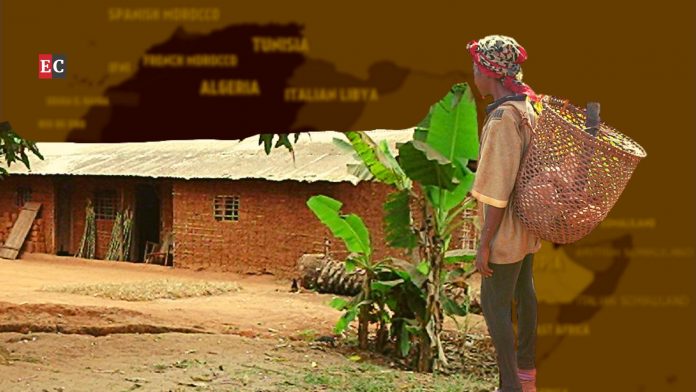 The following is a critical engagement with Peter Geschiere’s text ‘Imposing Capitalist Dominance Through The State: The Multifarious Role of The Colonial State in Africa.‘

For European colonial administrators, exploitation in the African continent came with tremendous problems and issues. Many new means of exerting pressure on African producers had to be devised in different ways and measures.

Geschiere, through his first series of reports that he consulted in the colonial archives of Yaoundé (Cameroon’s capital) while preparing for his field-work among the Maka of Southeast Cameroon, came across striking example of such characteristics.

As per the reports dated 1938, French officials tried to carry out a number of drastic measures that year itself, mainly aiming at a complete reorganisation of village life. For instance, the Maka peasants were irredeemably forced to produce more. Why would the civil servants have such total control over life in the villages?

To answer this, there are only a few general discussions on the role of the colonial state in Africa.

There is a celebrated dialogue on the differences between British and French rule, that is between indirect rule on the one hand and assimilation on the other. While the concept of assimilation is incompetent of explaining why French officials attempted such a drastic organisation, the concurrence of indirect rule and assimilation can hardly clarify the example of French colonial policy in Makaland.

However, a more analytical view of the role of the colonial state can be deduced from the theories of French anthropologists who tried to apply Marxist concepts to anthropological data available at that point of history. In their terms, the changes in the African continent in the 20th century can be characterised as a process in which the old pre-capitalist communities became increasingly compliant to the functioning of the dominant capitalist mode of production.

The Maka live in a dense and swampy forest traversed by numerous brooks and creeks. This gave them ample opportunity to evade the German expeditions or to make surprise attacks. The Germans were the first colonial rulers of Cameroon.

But the main hindrance for the Germans in their attempts to pacify the region was the social organisation of the Maka reflecting their love for liberty and their aversion to any outside authority. Around 1900, German merchants estimated that this region was one of the richest rubber areas of Africa. However, under German rule, rubber trade grew so chaotic that it became sheer plunder. The rubber trees were so often simply chopped down instead of being tapped. So, production soon began to decrease.

In due course of time after the outbreak of World War II, the French conquered this part of German colony. However, they faced certain labour problems which they tried to solve through the usual coercive measures. For this, they had to levy taxes, which they did by imposing a complete resettlement of the Maka communities.

Patrilineages, for example, until then, were scattered throughout the forest, but were later forced to settle alongside the new roads. Each village was placed under the command of one village chief, a completely new type of leader appointed by the colonial authorities. The mounting under-population due to heavy migration resulting from wide spread of old and new diseases, threatened to make colonial exploitation impossible.

The authorities reacted by organising campaigns against sleeping sickness. They also instituted strict police checks along the borders with other provinces in the hope of stabilising the population, largely to make sure that a sufficient number of workers remained. The different measures taken by the authorities mirror their totalitarian measures.

However, this type of undertaking would be problematic anywhere, but within Maka society, it was totally feasible. To them, it is still implausible that anyone could command a man to work on his own land. The right of every-able-bodied man in the villages to run his own life as he sees fit is virtually unaffected and the same goes for women.

However, it must be made prominent that farming tasks which are much more extensive than those of the men and their domestic duties do require a greater degree of uniformity. However, it is of curiosity to know how and why did French officials were led to such measures.

The truth is, they justified it in racist terms. According to the officials, the native was afflicted with a gentle inertia which ‘kept him from expending energy and engaging in productive activity.’ They referred to the sluggishness of people whose evolution has not yet reached a stage enabling them to accept the principles of our economy. However, later developments among the Maka by no means established this kind of racial stereotype.

After 1945, there was little evidence of any ‘inertia’ or ‘indolence’ on the part of the Maka when there was a considerable rise in the prices of coffee and cocoa on the world market and these new market products did offer obvious benefits to the villagers. The developments in Makaland are good examples of the difficult imposition of a capitalist market economy on a ‘domestic mode of production’ in which until then, market trade had played only a trivial role.

The difficulties encountered by the colonial state in Makaland were not extraordinary. Of course, the conquest of the Maka region was part of a much larger process, the notorious ‘scramble of Africa’ at the close of the nineteenth century. Until 1880, the European presence in most parts of the African continent was still restricted to a few settlements along the coast.

However, there was a growing competition between the various European powers for access to the interior of Africa and after 1880, the conquest of the continent took place at a rapid pace. Capitalist relations were introduced in vast areas which had hitherto experienced hardly any capitalist influence.

In Rey’s view, old production communities can effectively resist capitalism by defending their autarky. As is the case sometimes, the objections that can be raised seem to be presented here as if they were acting persons. Consequently, any possible inconsistencies between the conscious motives of the human actors and the structural implications of modes of production may be overlooked.

However, as long as a peasant community lives off its own products and makes its own means of production, it is difficult to involve it in the development of capitalism. Capitalist expansion presumes that labour is recruited and new markets are opened up within the pre-capitalist communities or that capital can be invested there.

The possibility of autarky continues to exist as long as a peasant community is not dependent on the market and not really incorporated into the money economy. The colonial state had to dismantle the autarky of the old production communities so as to facilitate further capitalist expansion.

The first establishment of colonial rule in Cameroon is important. It became a German colony rather than a British one. The reasons for bringing the Duala coast under German rule were many.

First, there was the need to protect German traders from the British and French competition. Also, the Hamburg traders considered the establishment of colonial rule to be necessary to open up the almost inaccessible market potential of the inland regions.

At the turn of the century, the colonial economy became more complex. Exploitation of the colony turned out to be feasible not only by means of trade, but by means of a plantation as well. In the course of the 1890s, the German discovered that just beyond the Duala coast, conditions were quite favourable for setting up European plantations.

However, with time, the development of the plantations did not turn out to be an unmitigated blessing for the colony. The planters came to have an insatiable need for new labourers. Initially, they recruited many of their African labourers from outside Cameroon. However, this recruitment became more and more difficult because France, England and Spain objected to the drain of labour from their colonies.

At first, the population in the immediate vicinity of the plantations could satisfy the German demands of labour. The peasants who had formerly worked this land had little choice now but to engage in wage-labour. The ‘Strafarbeiter’ or the convicts who served a term of two years or longer could be used for government projects such as the construction of railways. They were requited from the defeated population after the conquest or after the quelling of a rebellion.

After 1900, the colonial authorities had to constantly juggle the conflicting demands of the traders and planters. However, in the end, the planters as well as the traders turned out to be completely dependent on the government for the solution to their ‘labour problem’.

Labourers working for the traders encountered conditions that were hardly any more favourable. As porters in the trade caravans, they were often chained together to prevent them from absconding. Nonetheless, the German government assumed absolute responsibility in the end for solving the labour problem of the traders and planters in the colony.

In conclusion, it can be said that the capitalistic and colonial dominance in the Maka-ian story was extremely influential and remarkable. Locating the ecological and economic dynamics in the background of the geographical boundaries shows up as necessary.

is an Assistant Professor in Sociology at the School of Social Sciences, Kaziranga University, Assam.