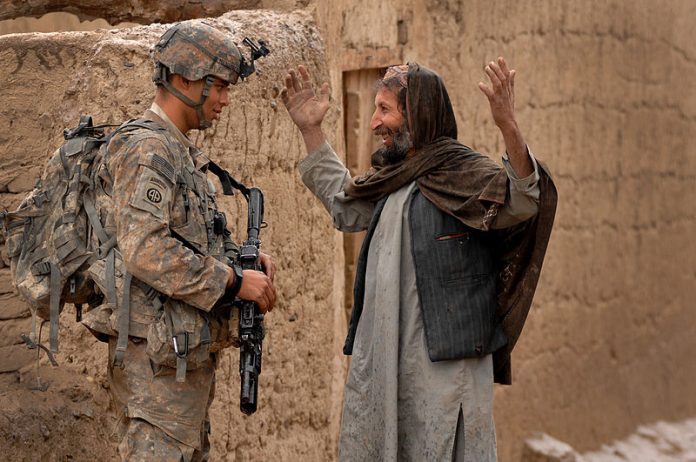 For example, if a certain people have always rejected a country’s constitution and continue to do so, then that document will not confer any legitimacy with regard to them. In other words, a government that is constitutionally elected can still be illegitimate because neither the government nor the constitution enjoy the approval of the people.

In this vein, one may argue that the American-controlled puppet regime in Afghanistan, currently being run under the presidency of Ashraf Ghani, is not the legitimate government of Afghanistan. It may be compared with the Vichy regime of Nazi-controlled France – a regime of collaborators rejected by the people for betraying their country to an occupying force. Far from being legitimate, one may assert that these people are the most hated and reviled because they oppress their own people to get benefits from foreign aggressors.

The stretch of liberal logic required to favour an American puppet regime over the arguably people-backed Taliban is astounding. It would be completely incomprehensible without the global context in which liberals think American occupation is better than a ‘conservative’ government formed by the people.

Despite all the big talk around the ‘democratic process’ in Afghanistan, one wonders if the sitting Afghan President, Ashraf Ghani, would be able to win ‘democratic’ elections without American support. He may not even be able to survive in Afghanistan without American security forces protecting him day and night. This is a good reason for him to support foreign occupying powers and keep stating that he wants those foreign occupying powers to stay in their land.

After the flight of US forces, Afghanistan has become completely embroiled in a struggle between those who had supported America and those who had opposed America. The two sides remain so fundamentally opposed to each other that one side has to give way completely for any stability to prevail. If the Ghani government was willing to peacefully give up power, there might be a fighting chance of peaceful transition. But, if it clings to power, as it is doing right now, it will be challenged. Needless to say, the fallout of this would be bloody as many will be killed or forced to flee for being traitors to their country.

There are those who make a show of supporting the Ghani government because it is ‘secular’. One has to be wary of elevating secularism to a sacred cow that stands beyond analysis. One may ask if the discourse of secularism in Afghanistan is merely being used as a weapon against what many might call a “people’s struggle for freedom”. The regime’s secularism may alternatively be seen as a compromise with a foreign power, the US.

In a war against a completely theocratic enemy, secularism doesn’t mean much more than a surrender to their theocracies. In Afghanistan, the Taliban sees the US as a proudly Christian enemy that has attacked them for being Muslim, and in that context, a proudly Islamic response would be seen as essential to subvert their propaganda, which is an important part of their bigger war machine. One may argue that this is the reason why those fighting against the US and its puppet administrators in Afghanistan cannot afford to be secular.

An argument is made by secularists that Pakistan will take over Afghanistan after the US leaves. Without going into the validity of this argument, even if we agree that Pakistan will take over, it is not at all clear why America or anyone else needs to worry about that, given that Afghans have made it amply clear that they first want Uncle Sam to leave and then, they would deal with Pakistan however they wish to — join it, ally with it or reject it. The point here is that whatever they do will be their decision and America (or any other foreign power) doesn’t need to break its head over it.

It should be obvious after a 20-year war that no pro-America regime can ever win legitimacy in Afghanistan. If that is the case, then there might be a contradiction in the view of those liberals who regard the right to self-determination as paramount and their opposition to Taliban. By painting the Taliban as a motley group of power-hungry mass murdering rebels, they may be belying their own ideological support for struggles for self-determination across the world.

Does this then mean that Indian liberals, if push comes to shove, would support ‘secular’ puppet regimes in areas colonised by imperial powers, rather than supporting the ‘conservative’ regimes backed by the people? Does this mean that in the event of actual liberation, which cannot happen without war and violence, they will not stand with the people of various colonised nations, no matter how much they make a show of supporting those ‘causes’ in times of (colonial) peace?

Also read ‘Why American Development Aid to Afghanistan Must Not Stop‘

Finally, what is self-determination? It is determining one’s own future and one’s own way of life without coercion from outside. Thus, ultimately, a society can choose the Taliban as its government if it wants to. Ultimately, no outsider has the right to decide if a society should choose American ideology over the Taliban.

The liberal opposition to Taliban, including from India, brings to fore this glaring inconsistency – on one hand, it espouses freedom and liberation, and on the other, it shows that they would rather a people remain unfree than the people determined to do something they don’t agree with. One may even argue that liberals world over are treating the people of Afghanistan as truant children who don’t know what’s good for them.

To think that self-determination means agreeing with them is a most curious liberal way to define self-determination. Whatever it is, Indian liberals cannot affect the outcome in Afghanistan. But, in positing a certain ideological position, they only reiterate the gross contradictions in their core belief system.

Views expressed are the author’s own and do not reflect any editorial position.

is a writer based in India. He uses the Jain debating methodology of Syādvāda to make arguments.