Home Analysis How Local Conditions and Politics Stalled the Growth of Maoists in India’s... 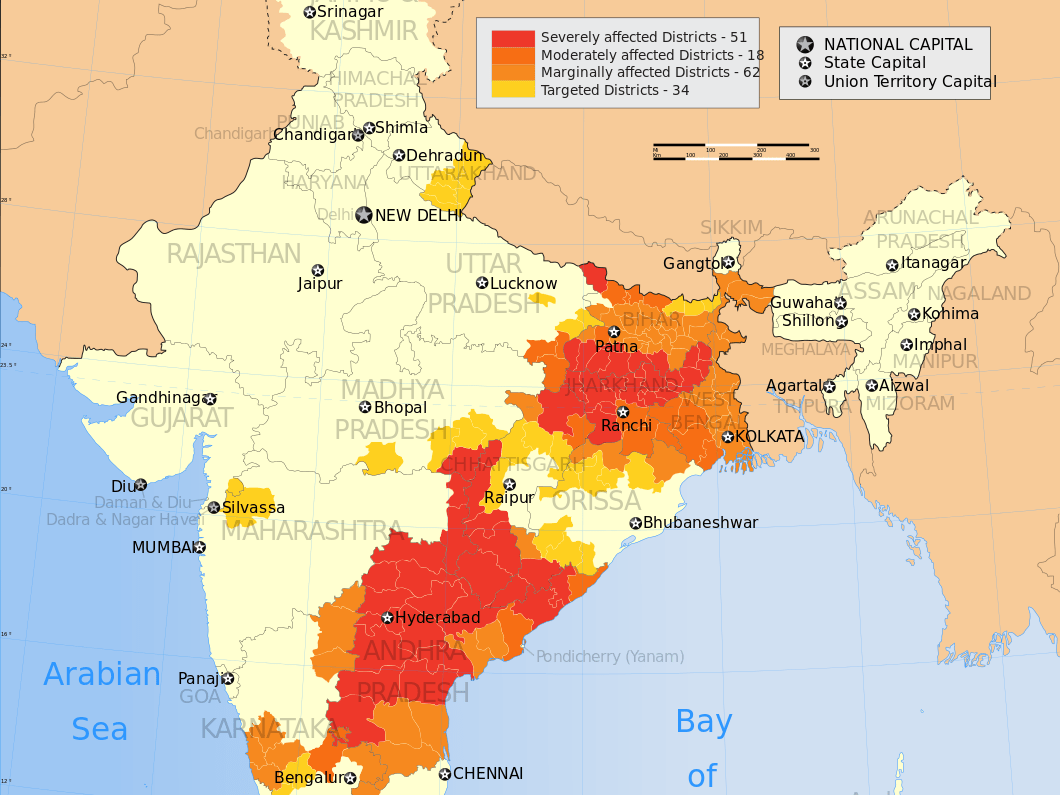 The presence of Maoists in the North East goes back to the late sixties when groups escaping persecution in West Bengal began to cross the border into Assam. One such squad of the Communist Party of India (Marxist–Leninist) [CPI(ML)] led by Kanu Sanyal, a founding father of the movement in India, took refuge for a few weeks in Goalpara before the police launched a combing operation. They managed to give the police a slip but more groups led by Bhaskar Nandy arrived subsequently to expand the base of the outfit in Assam and Tripura.

But the CPI(ML) could not compete with the organisations that had already occupied the political space in the two states. In Assam, the movement against foreign nationals gathered wide support cutting across class and community and most of the hill states had also begun to burn with the demand of secession. The issues in the region were more about identity than class exploitation.

It was not until the late 1980s when CPI(ML) — the man party was dissolved in 1972 and it split into several factions — was able to make an entry into Assam for a brief span when it supported an organisation called United Reservation Movement Council of Assam (URMCA) whose agenda was checking ULFA’s further expansion in Lakhimpur and Dhemaji. The errors committed by ULFA alienated members from the Mising community which provided a fertile ground for URMCA to consolidate its movement. But before long, several top leaders of the group were shot by the rebels and the movement fizzled out after a few years.

Next, it was the turn of People’s War Group (PWG) to explore the Northeast. In 1996, three top functionaries of the group including Ganapathy (general secretary of CPI-Maoist) attended the raising day celebration of the United Liberation Front of Asom (ULFA) at its camp in southern Bhutan.

“We held discussions on a range of issues. They (PWG) wanted to have an alliance with us but we were not interested since our goals were different,” ULFA chief of staff Paresh Baruah had told this correspondent during an interview in Myanmar’s Taga six years ago.

But the links that were forged between PWG and ULFA were sustained for a few more years. The Maoists’ objective was to establish a channel for weapons which motivated Kishenji (then a member of PWG) to undertake a perilous journey to Dhaka for a meeting with Baruah in 2001. He was received on the India-Bangladesh border in north Bengal by ULFA’s publicity secretary Ruby Bhuyan and accommodated at a safe house in the capital for over a week. Bhuyan later revealed that ULFA supplied two small consignments of weapons to PWG consisting of pistols and assault rifles.

Evidence has also emerged about the efforts being made by the United National Liberation Front of Manipur (UNLF) which is currently the biggest separatist group in the North East to establish links with the Maoist Communist Centre (MCC) in the 1990s. The charge sheet submitted by the National Investigation Agency (NIA) against UNLF chairman Raj Kumar Meghen who was apprehended in Dhaka makes a reference to emails exchanged between the two groups with the objective of coordinating “terrorist activities”.

The charge sheet does not elaborate on the nature of interaction but UNLF was exploring all avenues for purchasing weapons at that time which also included a deal with the Myanmar-based Chin National Front.

Renewed thrust in the North East

The birth of CPI (Maoist) in 2004 boosted efforts to expand base in the North East. According to government sources, the conclave preceding the emergence of the new outfit also discussed ways and means to extend the red flag to the North East which was considered important for two reasons. First, the region could be a potent source of weapons, and second, it could be a safe haven for cadres if the security forces intensify operations at Maoist strongholds in central India.

“Since there was less scope of a pact with the ULFA, radical groups among the Adivasi (tea tribes) in Assam were focused upon and areas along the inter-state borders where development was less. A decision was also taken to reach out to People’s Liberation Army (PLA) of Manipur which also believes in the Maoist doctrine, and test the waters in Tripura,” a former official of the home ministry explained.

This led to a flurry of visits to the region by senior functionaries of the CPI (Maoist). Meetings were held with select groups and rebel outfits, and a recce carried out of areas in Assam, Arunachal Pradesh and Tripura. In 2008, the CPI (Maoist) managed to ink an agreement with the PLA which led to exchange of visits by functionaries to each others’ camps in Myanmar and Chhattisgarh as revealed from the probe carried out by the NIA.

Next, some cadres from an Adivasi rebel group named All Adivasi National Liberation Army (AANLA) were taken for training by the Maoists to their camps in Jharkhand and Chhattisgarh. But the endeavour lost steam after its chairman David Tirkey was apprehended near Ranchi in December 2008 which was followed by the elimination of some top leaders by the police in Assam a few months later. Officials claim that two organisations were subsequently floated by the Maoists among the tea tribes — Assam Students Youths Organisation (ASYO) and the other from the Assam Chah Janajati Suraksha Samiti (ACJSS)— which came to light after some of their activists were nabbed in Odisha’s jungles by the security forces.

Around the same time, CPI (Maoist) also decided to float “lead committees” in some areas which engaged in recruitment, indoctrination and mobilisation with a long term plan. According to intelligence reports, these committees came up in Sonitpur, Dibrugarh, Chirang, Dhemaji and Goalpara but the most potent was the Upper Assam Leading Committee (UALC) which also forayed into Arunachal Pradesh. The goal was perhaps to establish a “red corridor” leading to China which explains why the government termed its activities as having “serious strategic implications” in a statement in Rajya Sabha on 20 March, 2013.

So far, the trajectory of the CPI (Maoist) in the North East seems to have belied the prognosis of some observers who were of the opinion that it would be able to occupy the space left vacant by the ethnic insurgencies and especially among the tea tribes of Assam. The Maoists knew it would be difficult to penetrate the hill states which was why they had focused upon Assam and also in Tripura for some time after the birth of CPI (Maoist). But they were hamstrung by other factors which impeded consolidation of the movement and its expansion to more areas.

First, the social conditions in Assam are different from either Chhattisgarh or Jharkhand where exploitation of the marginalised tribals has only increased over the decades. But in Assam, the social structure never allowed such abuses although vast sections of the state’s populace inhabiting the inter-state border regions continue to reel under abject poverty.

The space for political mobilisation is also less since there are numerous organisations including radical groups competing with each other in Assam and Tripura since the past several decades. Some academics describe the tea gardens as “colonial enclaves” which should have facilitated the entry of the Maoists on a large scale but the community is crippled by divisions and lack of unity.

Perhaps, CPI (Maoist) did not expect a swift and effective retaliation from the police so soon. On 9 May, 2012, four top functionaries were shot at Sadiya which almost rendered the Upper Assam Leading Committee ineffective. Some more prominent activists including Aditya Bora and Pallav Borbora were apprehended and jailed (Bora later secured bail). And between 2012 and 2015, all the top leaders who were entrusted with the task in the North East were apprehended. This included Anukul Chandra Nashkar, Anil Kharwal and Aklant Rabha from the central committee and Ajay Chanda who had played a key role in cementing the agreement with the PLA.

“The movement was expanding around 2012-13 in Assam. But there’s hardly any scope now since the history and social structure in Assam are different and they do not allow class struggle. Besides, identity is a major issue in this region,” said Bhaskar Jyoti Mahanta, Additional Director General, Assam Police, who compiled a report on the Maoist activities in the state five years ago.

The absence of top leaders only confused the rest of the functionaries who were unable to decide on a future strategy. While one section emphasised on importing the model from Chhattisgarh, others made a case for implementing the strategy that had been adopted by the PLA in Manipur which means a policy to build a support base instead of arming the masses. The report said that the PLA model has found greater appeal among the functionaries still active in Assam whose numbers are estimated to be around 170.

This article was first published in Firstpost with the title ‘North East has always been key focus of Maoist expansion plans, but local conditions and politics stalled growth’ and has been republished here with permission.

Rajeev Bhattacharyya is a senior journalist based in Guwahati, Assam. Read his reports for Firstpost here.

Featured image: Map showing the districts in India affected as in 2007 | Wikimedia Commons