Home Featured The Normalisation of Xenophobia in Assam 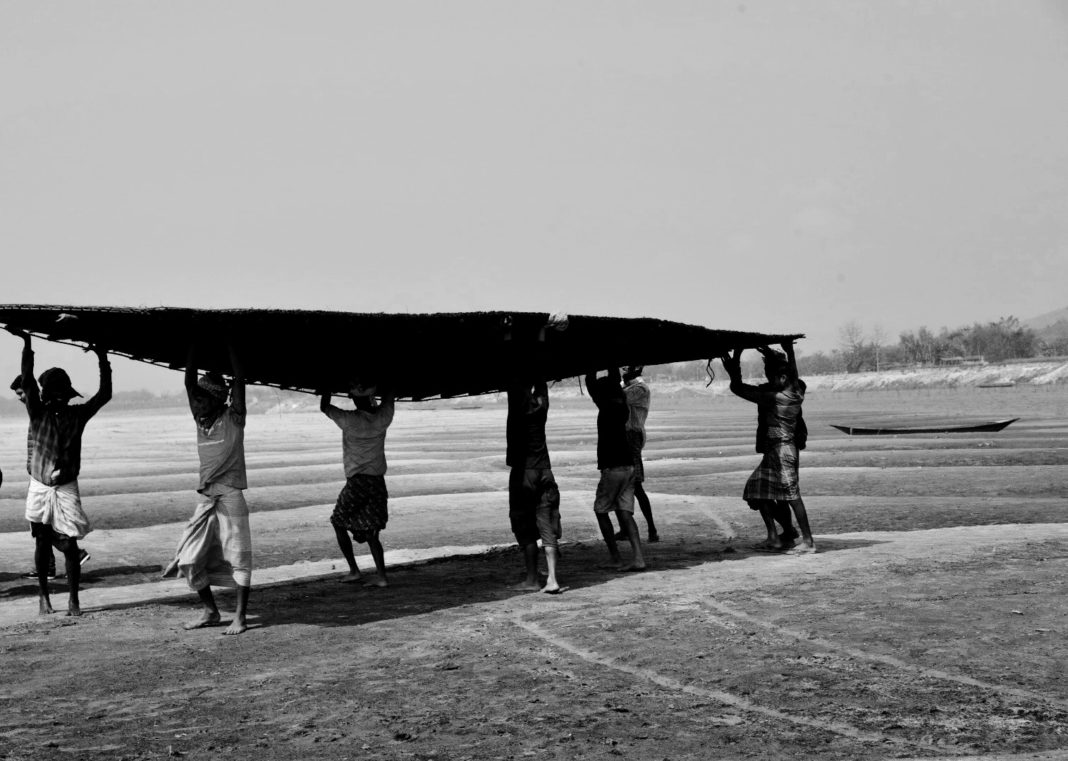 In Northeast India’s Assam, an aggravated crisis of citizenship and belongingness has taken firm grip since the government began updating the National Register of Citizens (NRC) around 2015 on order of the Supreme Court.

Even before this, the Indian state in Assam had been running a multi-pronged citizenship determination regime, comprising of Foreigner Tribunals and detention camps, to weed out so-called “illegal immigrants” or bahiragotos (outsiders) or bidexis (foreigners) from Bangladesh.

Behind these state-led frameworks of segregation lie a longstanding history of popular-level xenophobia, fueled by Assam’s public intellectuals, civil society organisations and political parties, that is principally pitted against Bengali or Bengal-origin Muslims and Hindus.

This xenophobic impulse in mainstream Assamese society and politics continues to this day, and is visible across the board, from media to pop culture.[I1]  But what really makes it socially acceptable to be a part of a xenophobic mass sentiment? What makes certain ideas – such as ‘indigenous and non-indigenous’ or ‘insider vs outsider’ or maintaining a homogenous linguistic identity – acceptable in popular conscience?

How does an idea hold the status of mass hysteria?

According to Michel Foucault, mass knowledge itself operates as a source of power. But, mass knowledge is almost never free from political and cultural propaganda. In fact, it acts an inception point of power, often normalising propaganda to a level that they seem normal to the common eyes.

For instance, while most would agree that freedom of expression is a democratic right, only a few would defend “state defined” blasphemy or a whistleblower. By not doing so, they normalise power, despite its corrupting or authoritarian tilt. The key purpose of techniques of normalisation is to bring an individual or a society into conformity with a social norm, or in other words, to perpetuate and reproduce power relations in a sociopolitical plane till they appear normal and necessary.

Normalisation of power has a dual context: the disciplinary and the biopower. In the disciplinary context, the norm gets legitimised through training and enforced repetition of an activity. A teacher who asks her students to finish anassignments within a set time frame falls in this category. The core idea here is to train the student’s body to be able to prepare the work effectively in the given time frame.

In the biopower context, power gets legitimised by influential social actors pushing an idea into public discourse and embedding it permanently. For instance, decade after decade, scholars have argued and upheld that capitalism and democracy are the best options that the world has in order to grow. These “normal” structures of free market economy and democracy are sowed into the society and mass psyche. With time, they tend to become ‘truths’ of the society.

Mass acceptability of a discourse is often due to the uncritical formation of opinion along the parameters of the “truths”, normalised and made necessary by certain institutions of knowledge, including individuals.

In Assam’s context, the normalisation of the “insider vs outsider” discourse took place through a tacit popular understanding that Assamese society cannot (or should not) be pluralistic. Through the clever use of what Sherry Ortner called “ethnographic refusal”, Assam’s public intellectuals continued to ignore certain facts, which present an alternate picture of the state and its vibrant history.

The denial or silence over the detention camps and plurality of cultures and communities, or the romanticism of the sanitised image of the ‘indigenous’ and an evil image of the alleged ‘outsider’ in black and white are all refusals of the alternative fact . The very idea of paranoia from an “outsider” has been repeated so often that with time, it has been normalised. The Assamese intelligentsia is to be blamed for this mass misdirection. They have injected the idea of “us vs them” so deep into the society that now it is manifesting in ways unthinkable. Xenophobia is only one facet of it.

With time, as xenophobia has been normalised and established, the common sentiments support the populist motion of segregating the ‘outsider’. And what is normal is acceptable. The astonishing part is that the mind doesn’t recognise, leave aside challenge, this feeling, as it has grown used to the idea of it being the “truth” of the society.

As Marx wrote, capitalism alienates people from other people, and their own essence as a whole. It has seeped so deep into our minds that every intellectual and emotional wall we construct is weak and corrupt. That is exactly why something so anti-poor and anti-humanity like the NRC is a popular demand in Assam.

People are blinded by the false consciousness of the Assam NRC being pro-poor and the proposed all-India NRC being pro-rich, thus ignoring the universal poverty and wealth inequality problems that afflict both the Assamese society and the Indian society as a whole. It is for this twisted reason that even Marxist parties have backed the Assam NRC, and rejected the national NRC.

This is the very ‘establishment narrative’ that the poor and marginalised have to fight every time the debate of identity comes up.

On the idea popular assertion that the ‘indigenous’ is in danger, we must ask: who is an indigenous?

The one who is indigenous now, might not have been indigenous centuries ago; or the one who is not indigenous now can be indigenous in a few decades. For instance, the Ahoms, who migrated to the lands once ruled by the Kacharis, Sutiyas and the Bodos from Upper Burma in the 13th century and brought along invasive patterns of violence and land-grabbing, are widely deemed “indigenous” by a normalised popular discourse.

Ahoms have, with time, become an integral part of Assam, and their integration normalised through popular narratives. It was largely done through historians overlooking the nativity of the Kacharis, Sutiyas, and the Bodos, and in the process, glorifying Ahom rule. But would the kingdoms decimated by the Ahoms have considered the them indigenous back then?

Let’s look at another instance. The defeat of the invading Mughal army at the hands of the Ahom forces is routinely painted in historiographical accounts as the victory of the brave “indigenous” over the villainous “outsider”. But this begs the question: how come two invasions (of Ahoms and Mughals) seen through two very different perspectives? Were the Ahoms always native to the geography of Assam? Were the Mughals native to the geography of Assam? If both the answers are in the negative, why is one considered an outsider, and no questions are asked to the other?

This is possibly because a particular group holds the power of knowledge in their hands. Normalisation, then, works in multitudes of narratives. Calling the Ahoms “outsiders” doesn’t fit the narrative of the local intelligentsia (many of whom are of Ahom lineage themselves), and hence, routine vocabulary becomes an essential part of the discourse internalisation process.

However, the question of whether Ahoms belong to Assam is redundant, simply because it should not matter anymore. Migration is natural to human evolution. Invasions were the norm during the pre-medieval and medieval periods. But the fact that the migration of some (Ahoms) is seen as “normal”, and of others (‘Miyahs’ or Bengal-origin Muslims) as invasive is where the twisted nature of Assam’s popular discourse comes forth.

This normalisation of one narrative over the other is the invisible power that some social groups hold over the others. Such discourses also end up, knowingly or unknowingly, terming people of Indian nationality as “outsiders”, thus painting them all as a “threat” to Assam. Such impulses normalise hatred and racism in the society.

Nevertheless, one definition of the“indigenous” was prescribed in the 1951 Census report. It includes anyone “belonging to the state of Assam” and conversing in any of the language or dialect spoken in the state, including Bengali. This umbrella definition, which has its base in an inclusive geographical identity, was opposed by many intellectuals of the state. By this definition, aren’t the ‘Miyahs’ (Bengal-origin Muslims) indigenous too? Aren’t the Bengalis indigenous too? But Assamese intellectual institutions found this inclusive idea absurd.

In opposition to this definition, the 2018 Brahma Committee prescribed an antidotal definition of “indigenous”. It defined “indigenous Assamese person” as someone who has lived in Assam for many generations and belongs to an ancient tribe or ethnic clan originated in Assam. That person should, further, be ‘determined to save his ethnic, linguistic, and cultural identity’.

The normalisation of this deeply exclusionary definition is the seminal source of all the problems. The committee not only normalised the exclusion of an entire community through their definition and timeline, but more importantly, refused to acknowledge social, political and economic factors that define human lives  and can force them to leave their homelands in search of a better life.

Another interesting phrase is ‘determined to save’. It tries to normalise the fear of an outsider from whom some kind of protection is needed. It normalises the fear psychosis of a majority to be overpowered by an overwhelming minority, and thus, not only fuels but also normalises hate crimes. The Nellie Massacre of 1983 is only one of many instances that show how popular narratives can directly incite the majority to physically turn against minorities.

When the question of language comes, we must distinguish between the Assamese-speaking population and the geographical population. Once we do so, the minority communities must be looked from a different perspective, taking into consideration how the Assam Movement (1979-85) cheated their aspirations andtheir own history.

But when we talk about the Assamese-speaking population who themselves have subjected many communities to conform to their identity – be it via the Assamese Official Language Act of 1960 or now, the compulsion on learning Assamese in schools – are now in a false consciousness of crisis.

History doesn’t lie. And, it is not lying this time either. Can anyone ignore the dominance of Assamese language and the fear it generated among the Bodos, the Misings that the demand for separate Bodoland and Misingland began? What about the push that Assamese linguistic chauvinism gave in the formation of a separate state of Meghalaya?

Linguistic chauvinism hasn’t gone anywhere. It is still very much part of mainstream Assamese intellectualism. For instance, Clause 6 of the Assam Accord not-so-subtly privileges the promotion of Assamese language over others. Even Dr. Hiren Gohain, perhaps Assam’s best known public intellectual, once opposed the institutionalisation of the Sadri language – the lingua franca of Assam’s tea tribe community. Most recently, he wrote against the use of the Miyah language as a medium of poetry used by Bengal-origin Muslim poets in Assam.

In Assam’s context, it is the institutions of knowledge that have normalised xenophobia towards an alleged ‘outsider’. The disciplining agents here are also products of this hatred against an ‘outsider’, and so are the scholars and social scientists setting the parameters of the new normal.

It is the uncritical normalisation of detention camps and social segregation that drive people to support exclusionary instruments like the NRC. But only a few can confront the question of what will happen to the families whose identities and sense of belongingness were lost during the NRC process. The majority seems to have no problem with the state rendering millions of people into mere figures of collateral damage, all because it refused to question what was “normal.”

Sutputra Radheye is a poet and commentator from Assam. He has written on cultural and political issues for several publications, such as Frontier, Countercurrents, Janata Weekly, and Culture Matters.